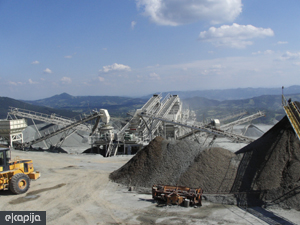 In Volujac, Zablace, Jazovnik, Divcibare and Podbukovi, about 2 million tonnes of limestone and diabase can be produced an processed on annual basis. In these quarries, which operate as part of the Sabac-based company Inter-kop, about 1.4 million tonnes of stone of various fractions were produced last year, while the plan for this year includes exploitation of 100,000 tonnes more than in 2010.

- The capacities of our quarries are quite big so that we can exploit over 2 million tonnes on annual basis. These quarries means a lot to our company, primarily because they provides us with raw materials for our operations, that is, for our Civil Engineering and High-rise Building divisions. We expect even bigger sales in the market once the construction industry comes to life and some large infrastructure works commence – Ljubisa Gajic, director of Quarries division at Inter-kop, announces for eKapija.

Divcibare quarry is in the vicinity of Kosjeric and it is engaged in the production and processing of diabase, which is exclusively used for finishing layers in the road construction. 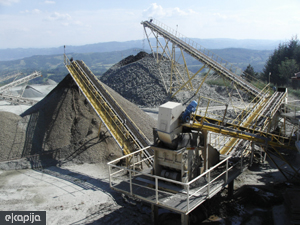 - Divcibare is an open-pit diabase mine. Diabase is a magmatic rock, which means that it is of volcanic origin. The annual capacity of this quarry is 350,000 tonnes. We have installed a state-of-the-art processing equipment in this quarry, including machines of the world-renowned company Meco Minerals. Divcibare quarry employs a total of 30 workers – says Gajic.

Volujac quarry near Sabac, opened in 2005, is engaged in the production of limestone intended for the road economy. Zablace is another quarry of Inter-kop and it is situated in the vicinity of Sabac. It is engaged in the processing of limestone with 98.9 percent of CaCO3, which is in use in sugar plants, factories of mineral fertilizers, fodder factories, production of fillers, etc. The limestone of this type is also exploited and processed at Jazovnik quarry near Vladimirci, of which capacity is 350,000 tonnes per year.

Valjevo-based company Erozija, which is engaged in the production of stone aggregates and planting materials, construction works, greening and planning, was privatized in 2008 when it was acquired by Inter-kop for EUR 3.5 million. The Valjevo-based company has a 8-hectare nursery and a 15-hectare quarry.

- The nursery was quite neglected at the moment of privatization, and it now includes over 500,000 young conifer and deciduous trees and horticultural plants of various age. The company had many problems at the moment of privatization - the giro-account was blocked, workers were owed salaries for 17 previous months, and the company had many other outstanding liabilities. After it was successfully privatized, which was also confirmed by the Privatization Agency whose representatives visited the company several times, Erozija took an upward direction: all late salaries are paid and the number of employees is growing – says Slavica Rakic, director of Erozija.

- We want to offer our clients a complete service – planning their space, supplying planting materials, and carrying out the works. Our current activities include greening works on E75 road in Novi Sad, greening works on Cerak kindergarten, and works on the regulation of the Bijelica river in Guca. In addition to independent works, we also work with Inter-kop on certain construction projects.

As the director of Erozija announces for eKapija, the company plans to invest in planting materials for biomass and in the production of pellets.

Erozija also owns Podbukovi quarry where high-quality limestone is produced and processed, intended for use in the construction industry - for the production of asphalt mixes and tampons. As people at Erozija told us, the limestone reserves in this quarry are estimated at 7 million cubic meters of solid mass.

- The quarry that was once neglected has limestone of the highest quality that was once used in sugar plants and is now in use in the production of various stone fractions for the construction of roads. Much money has been invested in the quarry. There is a new crushing machine made by Meco Minerals, which can grind 150 tonnes of various fractions per hour. The results of an analysis conducted by the Road Institute show that this stone is of exceptional quality - says the director of the Valjevo-based company.

The annual production of the quarry, situated in the vicinity of Valjevo, ranges between 250,000 and 300,000 tonnes, depending on the market needs and fractions in demand, while its annual capacity amounts to about 350,000 tonnes.