BAJATOVIC: Decision on increase in gas price in April 2011 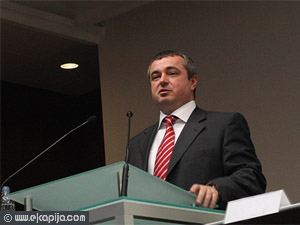 Srbijagas Director General Dusan Bajatovic stated that the decision on the gas price increase would be made in the second half of April and that it would be effective as of May or June.

- What is for sure is that there will be no mild upward trend in gas price - Bajatovic said to the press at the Kopaonik Business Forum, but he was unable to specify how much the price of that fuel would go up.

He reminded that the Government of Serbia had already approved an increase in the prices of heating and electricity, which was not going to be small.

According to Bajatovic, this year will be difficult for Srbijagas because that company's debts amount to about EUR 300 million due to inappropriate growth of gas prices, interest rates and exchange rate differences.

Bajatovic confirmed that South Stream gas pipeline, gas storage in Banatski Dvor and the entrance of Sogaz insurance company and Gazprombank to the market of Serbia in partnership with Srbijagas would be among the topics for talks during the next visit of Russian Prime Minister Vladimir Putin to Serbia, scheduled for March 23.

- Srbijagas is interested in a partnership with Russian companies in the field of electricity production at gas power plants - said Bajatovic.