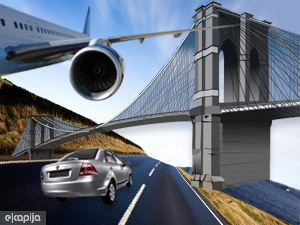 Projects are classified into 12 categories and we are this time presenting the most interesting investments in the category of TRANSPORT.

What did mark the previous year?

As expected, large infrastructure projects of national importance again drew all due attention of the citizens of Serbia in 2010. However, a bad impression is that most of these projects are still only being announced.

In addition to the construction of roads that will bring us closer or connect us to the world - famous Corridor 10 and our Corridor 11, it seems that the greatest attention of eKapija's readers was drawn by bridges, particularly Chinese Zemun-Borca bridge and the bridge across the Sava, near Ada Ciganlija.

There were also many investments in other sectors last year so that the list includes some long-expected projects in the field of air transport, as well as integral transport.

The biggest attention of eKapija's readers was drawn by the story about construction of Corridor 10. The total value of (still) the most prestigious highway in the Balkans is estimated at EUR 1.3 billion. The tendering process for selection of the contractor for works on completion of this project did not pass without "storms", but competent minister Mrkonjic is still optimistic. He says that the works will be accelerated to compensate for all delays and, for start, execution of works on its northern branch is now much faster.

The second-ranked investment is the announced "Chinese bridge", which will connect Zemun and Borca and, thus, significantly contribute to the relief of traffic congestion in the capital city. Although the foundation stone was laid back in July 2010, according to the latest announcements by the government, construction of the "Chinese bridge" (which is also becoming its official name) will commence in April 2011. Resigning Minister for NIP Verica Kalanovic says that it has not been determined yet how much will be paid in advance to the company China Road and Bridge Corporation, but what is for sure is that it will be less than 15%.

Right behind this investment on the list is the bridge that will certainly be the pride of the citizens of Belgrade -the bridge across the Sava, in vicinity of Ada Ciganlija, and it is probably one of rare investments whose progress is visible on a daily basis. Although there was much controversy concerning the cost of the bridge and whether it is more expensive than the Golden Bridge in San Francisco, the 175-meter concrete pylon for the bridge was finished before the deadline.

The fifth-ranked investment is another multi-year capital project – Corridor 11. Although an agreement was signed in late summer with Turkish company Kolin on the execution of works on several sections, Minister of Infrastructure Milutin Mrkonjic has recently announced that the Chinese may be interested in constructing a part of that corridor and that the Ministry would accept new partners if they gave a better offer.

New main routes in Belgrade, the project that was first presented in details by eKapija, ranks sixth. Namely, according to the adopted Spatial Plan for Belgrade-South Adriatic Infrastructure Corridor, the new route will go from Ostruznica cloverleaf interchange, on the right bank of the Sava, and then through Radnicka Street – Vojvode Misica Boulevard – Kneza Milosa Street.

The seventh-ranked investment is the first phase of reconstruction of Gazela bridge. Although there was much fear that the City would not be able to function at all, traffic lanes on the bridge were closed for traffic one after another and everything ended well for both citizens and road workers who sometimes even worked at inhumanely high summer temperatures.

Right behind it on the list is the project involving the construction of a bridge on the Danube in Novi Sad. According to the announcements by the Government of Vojvodina, about 60 million euros will be invested in 474-meter railway-road bridge, also known as Zezeljev bridge.

The story about whether Serbia needs to buy Port of Bar and whether the consortium of Serbian businessmen and the Government will buy the pride of Montenegrin transport is at the ninth place on our list.

The tenth-ranked is Novi Sad-based Pansped's announcement that it plans to have a contemporary cargo terminal built at the railway station in that city and invest few million euros in that project.

eKapija's readers also expressed interest in the government's announcement that Ladjevci military airport near Kraljevo will be opened for civil transport by the end of 2011, in which about 22 million euros will be invested.

Judging by events in 2010, we are also one step closer to metro in Belgrade. Which model of metro is the best and whether French metro is going to be used as a model for Serbian metro were the topics that drew a significant attention of eKapija's readers.

Take a look at the complete rank list of investments in the category of TRANSPORT and compare it with your own opinions, expectations and assessments.

One more thing - have you already read which projects drew your greatest attention in the categories of PUBLIC UTILITY INFRASTRUCTURE AND ENERGY, RESIDENTIAL AND OFFICE SPACE, SHOPPING CENTERS, SPORTS, TOURISM, ENTERTAINMENT AND RECREATION, as well as HEALTH CARE, INDUSTRY, AGRICULTURE AND FOOD INDUSTRY.