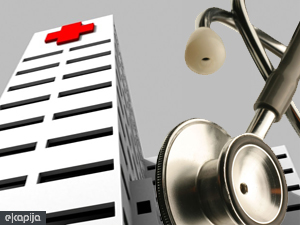 Projects are classified into 12 categories and we are this time presenting the most interesting investments in the category of HEALTH CARE.

Unfortunately, the project of reconstruction of four clinical centers in Serbia, worth 200 million euros, is not on this rank list. Had the Government held its promises, the news about commencement of works on these medical institutions would have definitely been on the top of the most read and most significant articles. However, although it was pompously announced in 2009 that renovation works on the clinical centers built in 1970 would commence in summer 2010 at the latest, that has never happened. There have been some smaller interventions and minor renovation works on these facilities, but much less than expected.

Another big investment in the health care sector in Serbia has finally been implemented - the Emergency Center of the Clinical Center of Vojvodina is opened, but that project is not part of aforementioned investment.

Anyway, competent organs now claim that reconstruction of three clinical centers - Nis, Kragujevac and Novi Sad, will be finished by the end of 2012, while works on the largest clinical center - the one in Belgrade, should be completed in mid-2013.

Let us remind that the works will be financed from a loan of the European Investment Bank and that the money is intended for construction works only, that is, it cannot be spent on procurement of necessary equipment.

And while the state confirmed the predictions of skeptics once again, the private sector confirmed its efficiency. Two private health centers and a clinical hospital were built in New Belgrade in 2010. Representatives of the competent ministry have recognized a good chance for cooperation with the Clinical Hospital (KBC) Beograd so that the first surgeries at the expense of the Republic Health Insurance Institute have been performed at that institution. We hope that that private-public partnership will be resumed for the benefit of all patients in Serbia.

A big attention was also drawn by stories about latest achievements in the world of medicine, applied in Serbia, such as early detection of allergies at the Military Medical Institution (VMA), stem cell banks in Serbia, as well as the news about a new laboratory of the Institute for the Application of Nuclear Energy in Belgrade.

The first-ranked investment is the Belgrade Clinical Hospital, the first private institution of the kind in the country, in which tens of millions of euros were invested. Over the period of six months in 2010, more than 200 surgeries were performed at this institution and its patients are mainly people from the waiting list of the Republic Health Insurance Institute (RZZO). 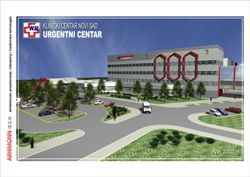 The second-ranked investment is the Emergency Center in Novi Sad - the first completely computerized medical institution in Serbia, ceremoniously opened in June 2010.

The Emergency Center, situated in a building that spans 9,000 square meters, has the ground floor, three overground floors and the attic. It comprises surgical and non-surgical intensive wards with five operating rooms, quick laboratory, radiological, endoscopic diagnostics, as well as on-call neurological service. On the level of the first and the second floor, a steel "tunnel" connects the Emergency Center with the the building of the Institute for Internal Diseases.

Between 150,000 and 200,000 patients can be checked at the new Emergency Center in Novi Sad every year, while between 100,000 and 150,000 can be hospitalized. Over 1.5 billion dinars were invested in equipment only and the center meets the same standards as other centers of the kind in western Europe, USA and Canada. 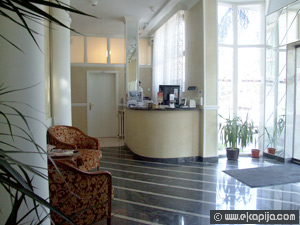 Besides, it is very important to mention that the general hospital Bel Medic has also included in its medical equipment "the X-ray machine of the 21st century" - a modern Toshiba 64-slice CT scanner.

New investments in accommodation capacities have also been announced and we also expect a positive reaction of the state to such dynamic and courageous investing at the time of crisis. The fourth-ranked investment is Delta Generali Insurance's health center. In the health center Jedro, which is situated in New Belgrade's housing project Belville, over 5 million euros were invested, while its equipment is worth about 2.7 million euros. The users of Delta Generali Insurance and all those who need a quality medical service will be taken care of by twenty permanently employed doctors. If needed, Jedro will also hire about 50 top experts from the country and abroad.

The fifth-ranked investment is the first British stem cell bank Future Health from Nottingham, which opened its office in Serbia in early 2010. It is a family bank stem cells and the samples of blood from umbilical cord that are kept in its laboratories can be used in medical treatment of the sample owner and his or her family members if needed.

Future Health owns all required certificates, the most important of which is the license issued by the Human Tissue Authority in accordance with the European Union's latest directive on cells and tissues.

The sixth-ranked investment is a laboratory for medical biochemistry, microbiology with parasitology and immunodiagnostics within the Institute for the Application of Nuclear Energy-INEP, which is since last summer available to the citizens of Belgrade at the new laboratory of the Institute in Svetozara Markovica street.

The seventh-ranked investment on this rank list is the story about the latest generation of highly sensitive and specific immunological tests that can detect over 460 allergens. These tests are done on blood samples at the Military Medical Academy.

The eighth-ranked investment is Parent House intended for accommodation of parents whose children have a malignant disease. The facility is situated within the Mother and Child Institute Dr. Vojkan Cupic, and it was opened in February 2010.

Take a look at the complete rank list of sixteen investments in the category of HEALTH CARE and compare it with your own opinions, expectations and assessments.

One more thing - have you already read which projects drew your greatest attention in the categories of SHOPPING CENTERS, TOURISM, ENTERTAINMENT AND RECREATION and RESIDENTIAL AND OFFICE SPACE?