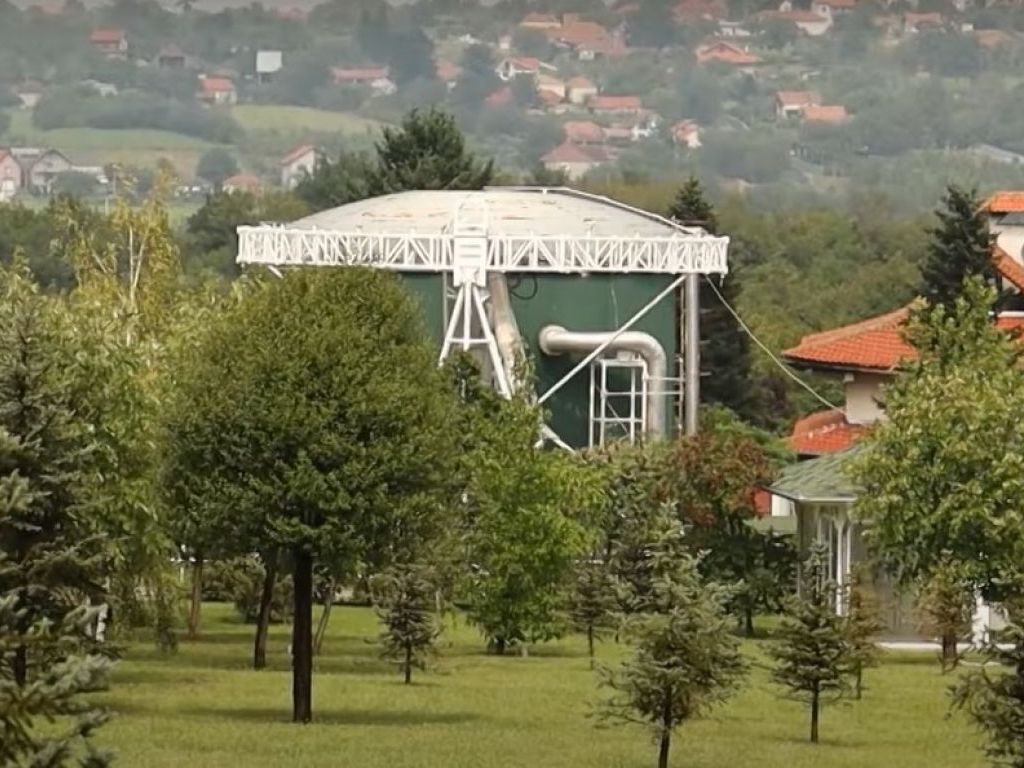 (Photo: Print screen / YouTube / Da sam ja NEKO)
A solar facility, unique in the world, which collects and stores solar energy without panels, has been built in Badnjevac near Kragujevac. This is the birthplace of the Serbian scientist Vladan Petrovic, who invented a system for storing electrical energy produced from solar power – for as many as six months. The problem of world energy could be solved – by a patent from Serbia.

World-class invention – preserving solar energy for half a year

This world-class scientific achievement was built by Petrovic practically in his yard, with financial help from a partner from Great Britain. This solar system is different from all others in the world, much simpler, and above all cheaper and more useful.

The facility, which resembles a mini platform of a space ship, collects solar energy through an aluminum mirror, following the movement of the Sun and concentrating the energy into an absorber. The energy goes directly to the accumulator, which is insulated in a special way. This way, electrical energy is obtained which can be stored for several months.

The professor claims that this system, per hectare from which the energy is collected, can heat up to 1,200 apartments. It is also important where on the Earth it is set up.

– In Serbia, there are around 2,020 sunny hours, and say, in Portugal, there are 2,200. It is counted how many kilowatt-hours you can collect in a country. In Serbia, we collect 1,400 kilowatts from the Sun annually, per square meter. This means that, if you have a concentrator for 5,000 square meters, when you calculate it, it’s millions of kilowatt-hours that you can collect – explains professor Petrovic.

He adds that the most import thing in all this is that, except for him, no one was able to accumulate that energy for so long until now:

– Something similar has been attempted with potassium salts, which melt at 350 degrees. Per cubic meter, they can accumulate 100 kWh, but that energy can only be stored for six days, and investing in this system costs EUR 130 per kilowatt. My system can collect, accumulate 550 kWh per cubic meter, it can store that energy for six months with a 2% loss and can store the energy at a thousand degrees. That costs EUR 3 per kilowatt-hour of an investment. So, you can solve the entire world energy issue.

Sputnik’s interviewee received an award from the Mirpuri Foundation from Portugal in July, the highest award for pushing science forward in 2022. With this Foundation, whose owner is a billionaire who invests a lot in ecology and who finances the saving of coral reefs on the Earth, he has also signed an agreement on the construction of the first pilot facility outside of Serbia, which is to be built in Lisbon.

The professor will realize his project with a German partner, the company Ipro from Dresden. This state company has already bought out a part of the project, and now it will also get the right to a concentrator. Their representatives arrived to the award ceremony in Portugal. They insisted to carry professor Petrovic’s suitcases.

– I created the optimal price for a concentrator of 25 meters. The essence here is that you can get 8,760 kilowatt-hours a year from solar energy, which means 365 days times 24 hours of getting electricity from solar energy. An we’ve managed to do so – Petrovic says and adds and the everything in Lisbon will happen in cooperation with the German government as well.

Representatives of nearly 20 countries, among them India, Sweden, Norway, Scotland, England, Italy and Turkey, are interested in this project. Representatives of the Central African Republic, the president’s cousins, aware of how much electrical energy they can get from the Sun, also recently visited Badnjevac.

– The Germans want the entire European Union to be heated using this system, and my desire is to have it installed in 100 companies in Serbia that would master this technology. I also offer training. I would like this new technology to officially start from Serbia, to solve the energy problem for the whole world, instead of eventually being forced to buy it from the Germans – the scientist concludes.