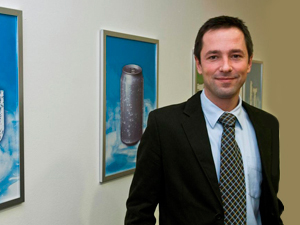 They remember the last year for the record production of 771 million tin cans and a 35 million euros worth of investment in Serbia. Installation of tin can production units within the plant in Zemun started in December 2010 and people at Ball Packaging announce opening of a new line on April 15, 2011.

Ball Packaging Europe, part of the U.S. company Ball Corporation, arrived in the market of Serbia in 2004 as the largest greenfield investment in the country. At the time, a total of 65 million euros were invested in construction of the plant where 150 people got jobs. David Banjai, the Plant Manager at Ball Packaging, speaks for eKapija about a new production line in Serbia, the company's appearance in the market of Russia, recycling, and the business climate in Serbia.

eKapija: You plan to open a new tin can production line in April. How much will that increase the existing capacities of the plant in Zemun?

- We will continue to produce beverage cans in this investment cycle. The capacity will be doubled, which means that we will be producing about 1.6 billion tons of tin cans a year. The investment is worth about 35 million euros and we plan to employ 40 people.

- Ever since we came to Serbia in 2004, we have always been saying that our plan is to open two tin can production lines in this country. We are in a close connection with the needs of customers and our geographic expansion depends on them. The projection for 2008 was saying that a huge growth in the east would take place in the Baltic region so that our plan was to expand our capacities in Poland in order to cover the market of northeast Europe. That plan was changed because the market of southeast Europe became more prospective, and since Belgrade is our center for this part of Europe, it was logical for us to situate our new line in the capital city of Serbia.

eKapija: You earlier announced opening of a tin can lid production line. Is that investment still part of Ball Packaging's plan for Serbia?

- We currently have two tin can lid production lines in Europe - one in Germany and the other in Great Britain, and the third line of the kind will definitely be situated in Belgrade. It is now very hard to say when because everything depends on market trends. As soon as the demand reaches an appropriate level, Ball will start working on the new tin can lid production line.

eKapija: Ball Packaging Belgrade has so far been focused on export. Will that trend be continued once the production capacities grow?

- We are an export-oriented company and the Belgrade-based plant is Ball's center for the territory of Southeast Europe, meaning that it serves the whole region. So far, we have been exporting between 80 and 85% of our production. Products from the new line will be intended exclusively for export.

- Serbia's foreign-trade relations are very important for our operations. All these markets are new to us. Last year we dispatched the first shipment of tin cans from Belgrade to Russia and Turkey. The price of transport has an important role because we transport air in empty tin cans so that we have to be as close to the buyer as possible in order to reduce our expenses.

- Export to Russia is only the first step for Ball Packaging. We plan to gradually increase the export of tin cans to that market in order for local buyers to get used to our product and in order for us to get familiar with the market. Opening of a plant in Russia is in the pipeline for 2013.

eKapija: Are you satisfied with the company's operations in 2010?

- We are very satisfied with our operations in Serbia in 2010, as well as with the operations of the entire European system. We managed to register a sales growth and to increase our market share in Europe, which now amounts to 32%, so that we remained the stable and strong second largest player in Europe. Last year we produced and sold the record number of tin cans in Serbia - 771m. The previous record was set in 2007 when we sold about 763m tin cans. What we envisaged for 2009 in our operational plan made in 2007 was achieved in 2010 so that we are satisfied with the fact that we managed to fulfill our ambitious plan only one year later. During the crisis, the growth rate dropped, but we still registered a growth. Our industry is not immune to the crisis, but it proved to be quite resistant.

eKapija: How much does the Government of Serbia help foreign companies with incentives and a good business environment? Do you experience some problems while doing business in Serbia?

- Incentives are a great thing, but they are only short-term measures. Incentives and benefits will never attract a real investor who comes here to stay. They will not be the crucial factor for an investor who does strategic planning. I am of the opinion that much more important is the business climate in general, as well as legal security and political stability. Stability is important because it enable each company to make plans. Investors find it a very bad omen when the game rules are changed frequently. 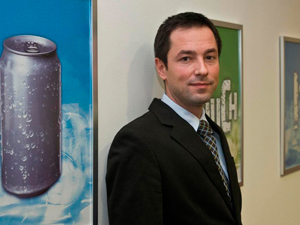 As far as we are concerned, we did our homework very good before we decided to invest in Serbia so that there have not been any special surprises for us. We knew very well where we were coming and what we should do, how to adapt our operations to the given circumstances, so that we have always been satisfied with what administration in Serbia can offer us. I cannot remember any case or problem that we have failed to solve. That does not mean that we have never experienced any problem. There has always been a willingness to solve the problem, but what lacked was expertness and experience, which caused certain things to last longer than they should.

eKapija: What are the buyers of tin cans made by Ball Packaging in Serbia?

- We sell our tin cans to breweries - United Serbian Breweries, Apatin Brewer, Carlsberg, etc., as well as to large juice manufacturers - Coca Cola, Pepsi, Nectar, Knjaz Milos, etc. We also work with small manufacturers that still do not have established brands, but use our tin cans to penetrate the market.

eKapija: The Club of Businessmen of Indjija was formed in late 2010 and one of its members is Ball Packagin. What is your role in that organization?

- We are members of several organizations in Serbia because we find the development of society very important. Nothing can be good for us if it is bad for everybody around us. In order for Serbia to develop, a regional development is necessary. Indjija is one of the municipalities that have made a serious step toward providing a good business climate and we would like to help such municipalities.

Terra Production, one of our partners, operates in Indjija and provides services of filling cans with beverage to small manufacturers that do not have their own tin can filling lines. Small manufacturers of drinks are important for the trend of tin cans in this market which had not been familiar enough with this packaging until 2005 when we came here. Small companies can become huge. For example, Red Bull was only a small manufacturer ten years ago, while now it sells about 5 billion tin cans a year. We work with corporate buyers, but we also seek a new Red Bull.

eKapija: Part of Ball Packaging Belgrade is Recan. How do you see a progress in the field of collecting metal for recycling over the past few years?

- When Recan was put in operation in 2005, we only needed to form a network of collectors because all tin cans were sent to landfills. Now, when a good network is developed, collectors bring us tin cans we pay for and then bale and send to an aluminum manufacturer to make a semi-finished product for us to use in our production. In order to achieve national goals for the return of packaging, we must introduce primary selection in the country, that is, we have to involve citizens in classification of waste. In order to educate citizens, primarily young people, we formed Recan Fund in 2005, which is a non-profitable organization engaged in education in environment protection and recycling, with an accent on aluminum cans.

eKapija: You are Chairman of the Managing Board of Sekopak, which advocates for responsible management of packaging waste. What is your comment on the new Law on Packaging and Packaging Waste?

- That law is very important because it finally introduces the principle of "polluter pays". Anybody who launches a product in any packaging is responsible for that packaging and he must make sure that certain part of that packaging be recycled and returned to the production process.

eKapija: What are the plans of Ball Packaging for 2011?

- Our aim is maintain performances of the line 1 while we install and test the line 2. We should not endanger our previous operations by dedicating all our energy to the latter. We expect to be ready to work at full steam from the first to the last day in 2012 and to show the full potential of our plant.