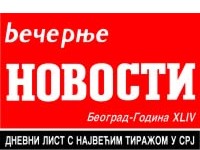 Vlade Divac is interested in procurement of Novosti. He sent the offer through auditing company "Ces Mekon" and the offered price is €2,500 per stock. It is true that Divac is not officially mentioned and the fact is that we neither meet him nor hear from him - says Novo Tomić, president of Association of minor stockholders of Novosti, because of the rumors that "somebody spoils Divac’s plans related to procurement of this media company". Tomić adds that they turned to the Securities Commission on that issue and they were said Novosti will not be sold until Trade Court gives the answer to question who is the owner of 30% of Novosti: SCG or Serbia.

"Therefore, the stockholders can include their property as share in the newly founded company and then sell it", says Tomić. He did not want to comment on whether it is the same case as the one with "C market" when Miroslav Mišković, the owner of "Delta", wanted to overcome the Court’s ban on sale of these stocks. "Although we didn’t either meet or hear from Divac, we know that he is ready to buy all stocks from not only the minor stockholders, but also from the State", says Tomić. Consulting company "Ces Mekon", which was the official consulting company of Divac in the first attempt of procurement of "Knjaz Miloš", did not want to comment on the claims of the stockholders that they are only agents of some other party in this business.

The Securities Commission say that the stockholders did not turn to them officially, but they also remind that the procedure for takeover of Novosti was frozen on July 20, after the Republic of Serbia took the case to the court. The decision of the Trade Court is expected these days, because the authorized judge concluded the hearing related to this case on January 17. However, the party who suffered damage, that is, either Republic of Serbia or State Union of SCG, may lodge complaint to the higher Trade Court within eight days.

It is interesting that Republic of Serbia, if there was not for German Waz, would not even remembered to determine how big was its share in Novosti. The question of ownership aroused immediately after the Germans gave official offer for takeover of stocks at price of €2,000 per stock. The Securities Commission points out that Waz did not give up and that it constantly restores its banking guarantee.

Novo Tomić says that the Englishmen are also interested in Novosti.

Novosti was privatized in accordance with the earlier law when total of 6,739 stocks were issued, 4,268 of which are owned by employees and retired persons, whereas the State and Pension and Disability Insurance Fund own 2,471 stocks. The second biggest stockholder, after the State, is fomer manager of Novosti, Rade Brajović, who owns 48 stocks. In case Divac’s offer was successful, he would have to pay €16.8m in order to own Novosti.