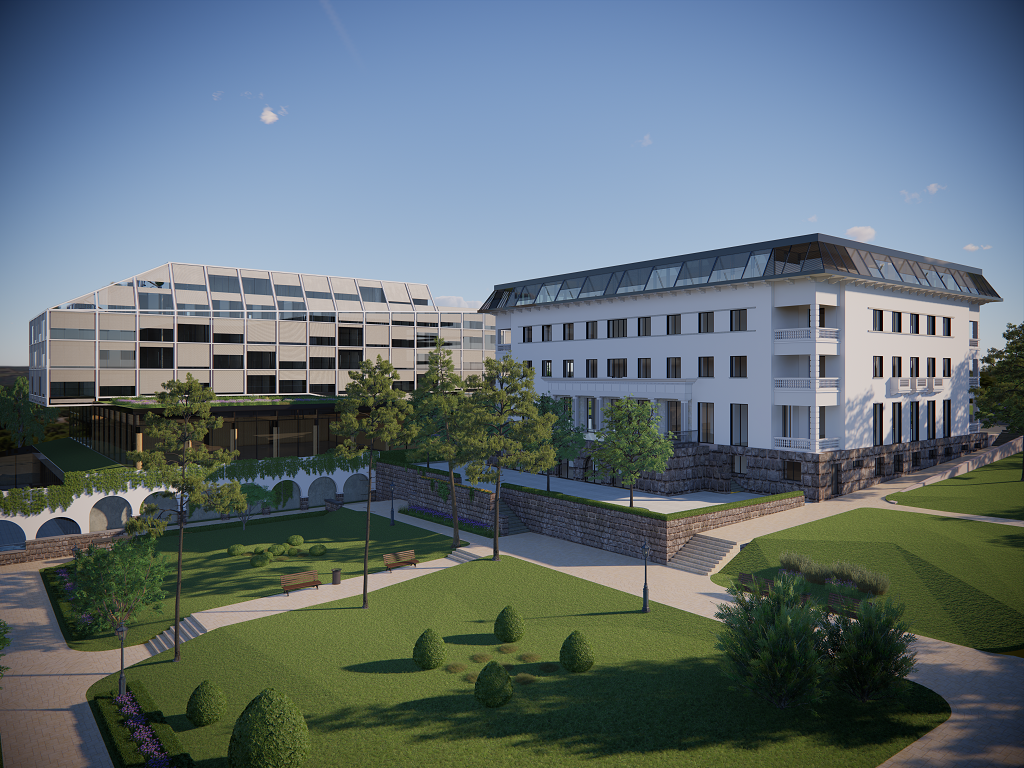 (Photo: Urbanistički projekat / Atelje AL)
The Municipality of Arandjelovac has issued a notice which says that, for the project of reconstruction and extension of Hotel Sumadija, the preparation of the Environmental Impact Assessment Study is required. This is a project which was up for public review and which was prepared by Atelje AL doo from Vrnjacka Banja. The investor is Bukovicka banja Stublina doo Arandjelovac.

The hotel was built in the 1930s. It has been pronounced a cultural good and is protected at the Institute for Protection of Cultural Monuments of the Republic of Serbia.

The parcel on which the hotel is located is on the very outline of the north part of the Bukovicka banja park, one of the oldest and best-preserved spa parks in Serbia. South of the hotel are two outdoor pools with the accompanying locker rooms and the Arkade restaurant. The facilities are, for the most part, in a state of disrepair, out of function and featuring an inadequate look compared to the surroundings.

With its features, said unit would complement the offer for the future users of the whole area and beyond, but not just with the features of the reconstructed and extended facility, but also through forming an attractive open space for all visitors in the form of a developed green area, the garden of the hotel’s patisserie, the outdoor pool beach and so on, the documentation says.

The urban project plans the development of the construction parcel and the construction of said facility with all the accompanying areas, such as road and pedestrian access routes, traffic and maneuvering areas, green areas, as well as parking areas in the form of two underground garages.

Since the time the hotel was built, the standards in hotel management have changed considerably. In order for the facility to be able to meet the contemporary demands and be competitive in the market, an extension of the existing hotel has been designed, with a bedroom block, a congress center and a part with indoor and outdoor pools, which, in short, comprise the functional organization of the complex.

The extended part of the Hotel Sumadija facility is to have two underground levels, a basement, five floors, including the ground floor, and a loft.

An expansion of the canopy of the main entrance is planned so as to enable a covered access to the hotel for road vehicles. 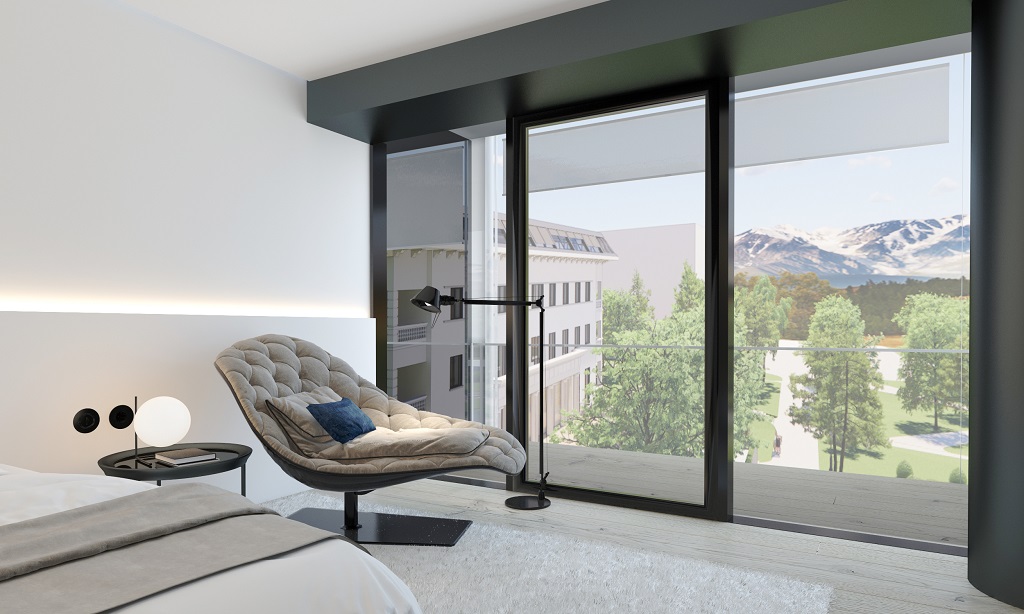 (Photo: Urbanistički projekat / Atelje AL)
The central atrium of the existing facility should be kept as an open space, that is, the existing atrium could potentially be closed by a glass lantern on the roof (at the level of the roof plate above the lobby at the ground floor level). In this past of the facility (the existing facility of Hotel Sumadija), in the functional sense, the following spaces are formed:

– an entrance hall with an a la carte restaurant at the ground floor level;

– bedrooms with room service spaces on the first two upper floors and the loft, but also partially on the ground floor level;

– technical rooms with a primary restaurant for breakfast and dinner and a part of the kitchen on the basement level of the existing facility.

– and indoor pool with a spa and wellness center;

– a room for meetings of various capacities;

– technical rooms and an underground garage on the basement level and on the lowermost underground level with a space for the renting of bicycles.

A heated corridor is planned between the extended part of the facility and the existing facility of Hotel Sumadija. 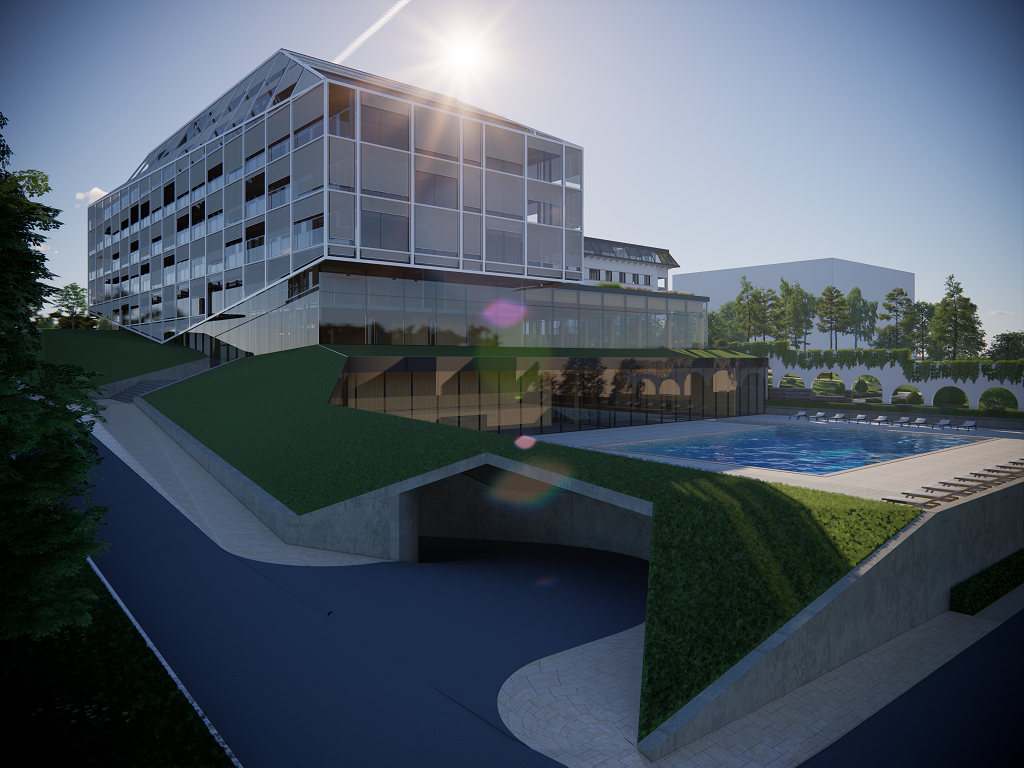 The reconstruction of the outdoor bath, with an expansion and an extension, is planned, entailing the integration of the Arkade facility into the east façade of the newly formed facility, as well as the establishment of a heated corridor with Hotel Sumadija (potentially with the General Hospital building too), that is, between the features in the single tourist complex that all these facilities comprise (heated corridors may also be formed on the levels of the underground floors and/or the ground floor).

The demolition and removal of all the existing facilities, except for Hotel Sumadija, is planned, along with, as said, the integration of the existing wall of the outdoor bathroom with arcades into the east façade of the newly formed facility.

The preliminary design which is an integral part of this Urban Project is the work carrying the code 68135 that won the Contest which took place in April and May 2021. The team of Atelje AL consists of Branimir Lukic, Darko Cvetkovic and Nevena Novcic.

In preparing the project documentation for the reconstruction and extension of Hotel Sumadija, special care was taken about the architectural connection of the old and the new, so to properly preserve the building legacy, while also giving it a contemporary stamp.

The existing wall of the east façade of the outdoor bath with arcades is kept as a screen behind which features of an outdoor pool and the balcony of the congress hall are planned, and the idea was to have the recognizable character of this wall be dominant compared to the retracted elements, while also being connected into a single whole with the extended parts of the facility.

In designing this facility, care was taken to meet the basic needs of a four-star hotel.

On the existing facility, the minimum requirements also need to be upgraded through improving the heating comfort, acoustic and, finally, visual comfort of the hotel’s clients. Special attention should be paid to the energy efficiency of the facility during the exploitation.

The entrance hall is directly connected with the a la carte restaurant (on the ground floor) and the main restaurant in the basement, but also, through a heated corridor, with the congress center, the bedroom block of the existing part of the hotel and the spa center with outdoor and indoor pools.

Next to the main entrance, the entrance to the congress center is also planned, on the ground floor level, so that this part of the hotel, with its features (the wardrobe, the lobby, mini meeting rooms of various capacities) would also be easily available directly to users which are not hotel guests during certain celebrations, presentations and gatherings.

Rooms for administration employees and other employees are specially designed with all the auxiliary rooms and meeting rooms, wardrobes and toilets. 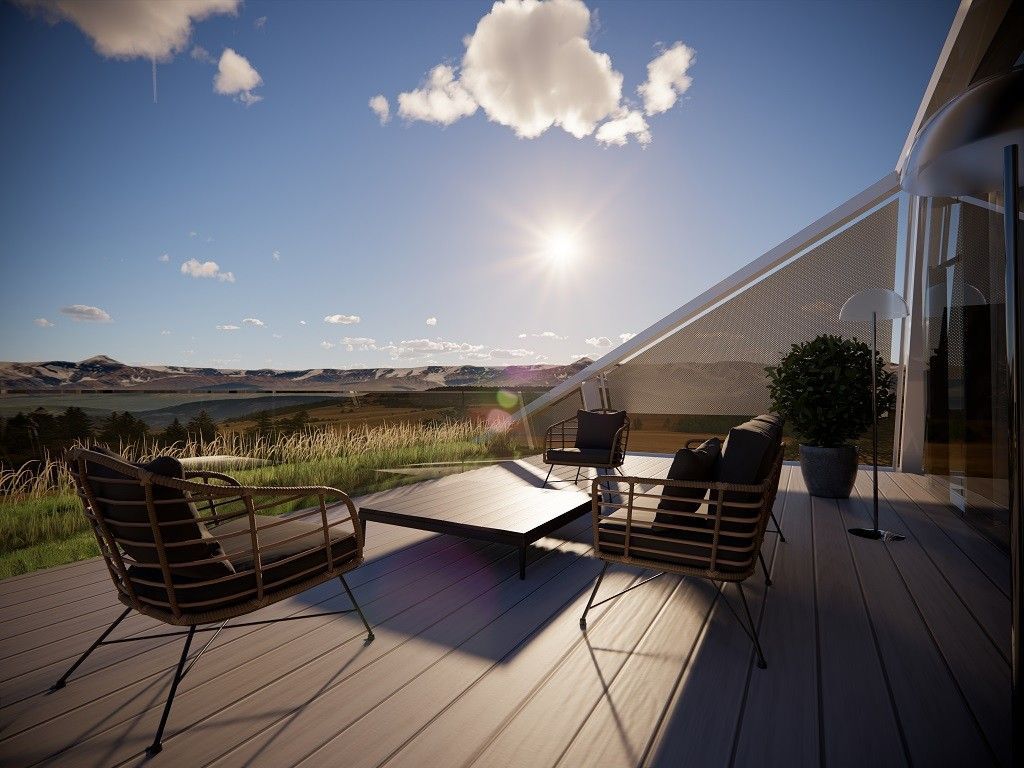 – a central kitchen with auxiliary rooms and a space for food delivery with road access;

– a washing room with auxiliary rooms;

Due to the configuration of the terrain, the basement level is fully dug in within the part where the underground garage and the central kitchen are planned, with technical rooms, to Ilije Garasanina Street, whereas, on the opposite side, toward the park, the following rooms are oriented:

– congress rooms with a balcony in the extended part of the facility:

– and the main restaurant with an outdoor space on the park (terrain) level, in the existing part of the facility. The restaurant has a capacity of around 100 spaces (additional seating for cases of higher hotel occupancy rate can be organized in the hall in front of the restaurant, but also in the garden of the restaurant).

In the rear part of the kitchen, a waiters’ office with a part for dish-washing and a vertical communication (through an elevator and a two-way staircase) with the underground levels, but also the ground floor, due to the a la carte restaurant, is planned.

The features of the wellness and spa center:

– an outdoor pool, an indoor pool connected with the outdoor pool, a water-massage pool, wellness (a Finnish sauna, a bio sauna and a Turkish bath, a tepidarium and a cold shower), rooms – massage cabins, wardrobes with a sanitary block.

Rooms for hairdressing, cosmetics, manicure, pedicure and so on are planned in the wellness part of the center.

A gym with special wardrobes, a small bowling alley and a café bar are planned on this level, which complements the overall offer of the hotel.