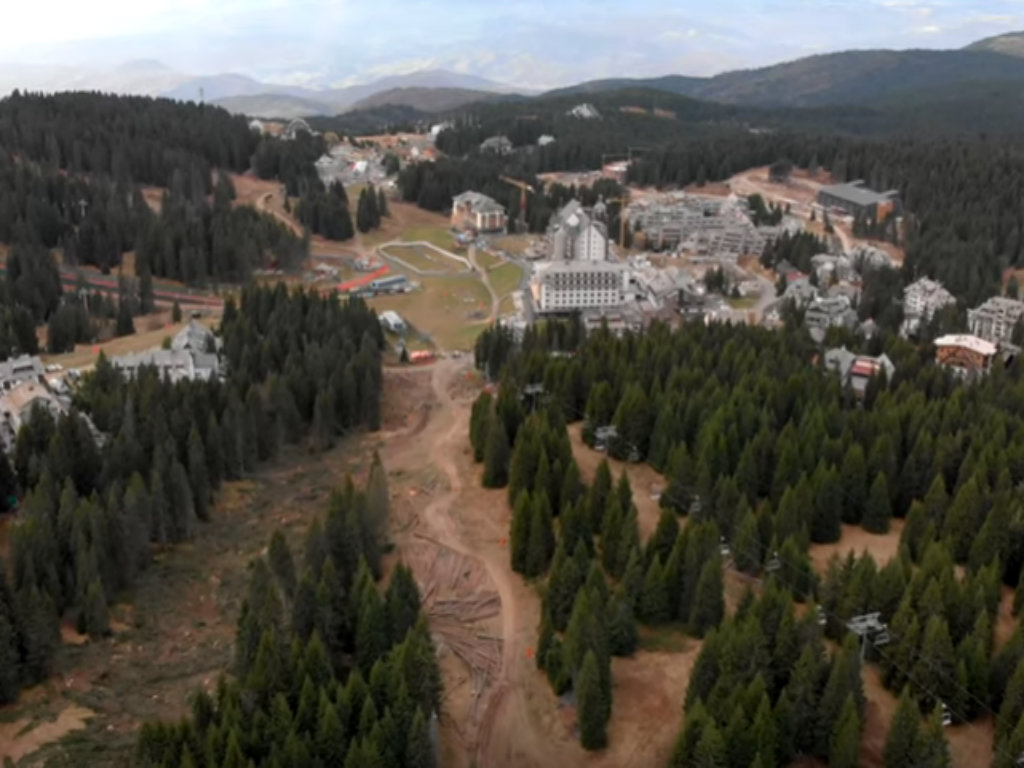 (Photo: YouTube/screenshot)
Kopaonik to Get Luxury Resort, Five-Star Hotel Opens, Premium Experience of Kopaonik, Heliport with New Garage to Be Built – these are only some of the article titles concerning the favorite winter tourist center from the past few years. Parallel with the luxury and the glamor, there are also titles such as: Abomination on Kopaonik, No Water on Kopaonik Due to Unplanned Construction, Feces Flowing Down National Park Kopaonik.

One thing at least is clear – construction activities on Kopaonik are in full force. The data of the Statistical Office of the Republic of Serbia show that, in August last year, as many as 28.4% of all the construction permits of the total of 2,843 was issued by the local self-government of Raska.

Can Kopaonik withstand the rapid construction, who controls the built facilities, are there illegal buildings – these are some of the topics that the eKapija portal tries to look into. In a sentence, the answer would be: while the National Park Kopaonik proposes a ban on further construction, the authorities of the municipality of Raska say that the construction is followed by an improvement of the infrastructure. The story, however, is much more complex.

– Combined, the capacities of these two “smaller” tourism centers already exceed the tourist accommodation capacities at TC Kopaonik. The reason for the great expansion of the construction that has happened in the past few years primarily lies in the high price of the floor area achieved in apartment sales, but also due to the high visitation rate during the winter tourist season – the executive director for legal and economic affairs of the NP Kopaonik, Predrag Sumarac, says for eKapija.

Construction within NP Kopaonik – Everybody has permits

When it comes to construction within the NP Kopaonik, the majority of the activities are in the tourism center itself. Our interviewee points out that all the facilities are built with valid permits issued by the competent ministry, that is, the Ministry of Construction, Transport and Infrastructure.

– All the facilities that are built on the mountain are built with valid permits. I am sure that the situation is the same at the TC outside the borders of the protected area of the national park, but the control of the construction of such facilities which are outside the borders is not under the jurisdiction of the National Park Kopaonik – Sumarac reminds.

According to our interviewee, ski bars are the only significant problem when it comes to construction without permits in the past years.

– As for construction without a permit or construction outside the defined dimensions and characteristics of the facility from the obtained permits, in the past few years, the only major problem that we had as authorities concerns ski bars as temporary facilities. In this, as well as in all other cases of the violation of the articles of the Law on Planning and Construction, the Public Enterprise National Park Kopaonik regularly notified the Republic Building Inspection and the inspector in charge – Sumarac says.

Despite the fact that the majority of the construction activities is done with permits, the increased construction has a range of negative effects on the nature.

– What’s a problem when it comes to construction within the borders of the national park is the increased tempo of the constant urbanization of the area. That is not something that the park promotes, because that kind of an urbanization tempo has a range of negative effects on the nature we are protecting, primarily through the pollution of water and land. In its main planning document, that is, the NPK Management Plan for 2020-2029, the National Park says that, in the coming period, a ban on further construction should be considered, except for investment maintenance of the already built facilities, which is a principle that the NP Kopaonik promotes and insists on – Sumarac points out.

However, the municipality of Raska did not give us a concrete answer regarding the number of facilities which are being built without a construction permit. As they told our portal, in 2020, 2021 and 2022, up till now, the construction inspection of the Municipal Administration of Raska carried out a total of 180 regular and 105 extraordinary inspection supervisions.

– It should be kept in mind that the construction inspection is obligated to carry out at least two regular inspection supervisions over the construction of facilities which are being built based on the issued decision on the building permit (control of the foundations and control of the facility in the structural sense). A certain number of charges were filed against illegal builders, and depending on the concrete circumstances, other measures proscribed by law were adopted as well. The purpose of the imposed measure is primarily to realize the goal of the inspection supervision. The supervised subjects for the most part comply with the issued construction requirements or voluntarily act in line with the imposed measures within the set deadline, but there are also cases where an enforcement needs to be done, when the construction inspector adopts the decision in line with the law and submits it to the competent organ of the local self-government unit – they explain at the municipality of Raska.

Reconstruction of sewer network in the center of Kopaonik

Although Kopaonik has been present in the news increasingly often in the past years due to its utility problems, such as the sewer overflowing, the lack of drinking water, construction waste landfills, with waste ending up on the slopes of the mountain instead of at waste disposal sites, the municipality of Raska says that the increased construction is accompanied by an upgrade of the infrastructure. Good news arrived on March 30, when the Ministry of Construction, Transport and Infrastructure issued the building permit to the municipality of Raska for the reconstruction of the sewer network in the center of Kopaonik.

– The project for the execution of the works is completed. The estimate is that the execution of the works will cost around EUR 2 million. The project will be financed through the Ministry of Environmental Protection. The project is on the list for financing within the Program of the Construction of Waste Water Treatment Facilities and Sewer Network in the Territory of the Republic of Serbia, realized by the Government of Serbia and the Council of Europe Development Bank. The works are expected to begin in the summer construction season – the municipality says.

– This is a complex intervention which requires around EUR 25 million. The documentation is being prepared, and the funds will be provided through the Ministry of Environmental Protection – the municipality says.