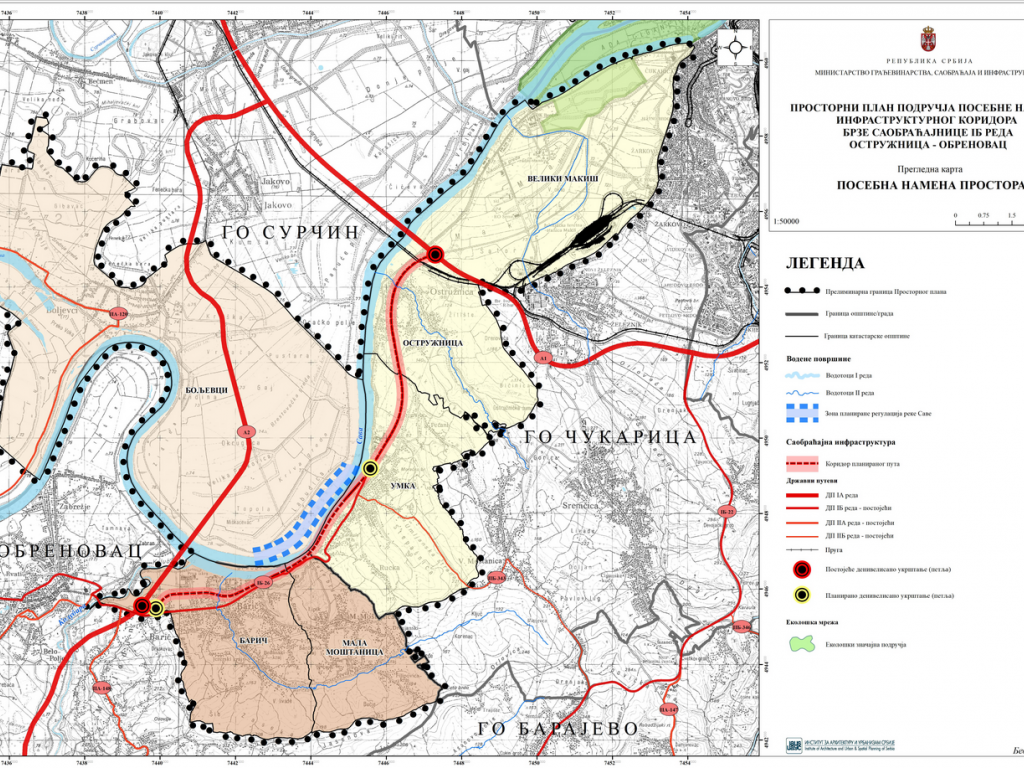 (Photo: Printscreen/Prostorni plan)
The early public review on the occasion of the preparation of the Spatial Plan of the special-purpose area of the infrastructural corridor of the Ostruznica-Obrenovac fast route is taking place between July 11 and 25.

It says that the fast route will be around 14.8 km long and be designed for a maximum speed of 100 km/h.

1) the corridor of the planned fast route, from Ostruznica to the connection with the IA-grade state road E-763 with a total length of around 14.8 km and a width of 50 m to 300 m, which encompasses the route with the protective belts of the fast route;

2) a space where the regulation of the Sava River and the amelioration of the landslide, with an orientation length of 3.5 km and a width of up to 1,800 m;

The conception of the planning, use and development of the space is defined in the way that secures the construction and exploitation of the corridor of the fast route as part of the IB-grade state road 26 and the connection of the central Belgrade city area and the city municipality of Obrenovac, that is, which will connect IA-grade state road E-763 (Belgrade-South Adriatic highway, Belgrade-Pozega section) and the south bypass route of the city of Belgrade (part of Corridor X), providing a better positioning and the possibility of the spatial integration of the city of Belgrade with a wider southwestern, environment, as pointed out in the Spatial Plan.

It proposes the scope of the spatial plan in parts of the territory of the city of Belgrade, the city municipalities of Cukarica, Obrenovac and Surcin, through which the corridor of the planned fast route passes, namely:

The construction of the fast route will directly contribute to a faster development of the encompassed part of the administrative area of the city of Belgrade and the city municipalities which are directly connected to this corridor, primarily their traffic and economic integration with the overall space of Serbia, it is pointed out in the spatial plan and added that it will also contribute to the economic development and integration of other parts of central Serbia which are not in the direct environment of the infrastructural corridor, primarily parts of Macva, Kolubara, Srem and other administrative districts.

The area of the spatial plan spreads parallel with the Sava River and connects the construction area of the city of Belgrade with settlements along the Sava and the city municipality of Obrenovac. Along with other measures and programs within the policy of development of road transport, their traffic integration in the space of Serbia is considered one of the main preconditions of a faster economic and social development. The condition for realizing that goal, that is, for achieving bigger positive effects of the influence of the infrastructural corridor on the wider environment, is the construction of said fast route section, it is said.

The planned route of the state road is split into three sections. The first section begins at the existing interchange “Ostruznica” on the south bypass route around Belgrade (part of Corridor X), stretches along the route of the existing road with a planned expansion on its right-hand side, all the way to the intersection with the so-called “old Ostruznica road”. The second section begins from the planned de-leveled crossing and is a newly planned route which goas along the right coast of the Sava River in the territory of the Umka settlement (with substantial planned works on the regulation of the Sava River, the construction of an embankment and the stabilization of the landslide) to the Baric settlement, where the planned route diverges from the coastline. The third section begins at the Baric settlement and is a newly planned route which goes along the existing road through the industrial zone of Baric, all the way to the planned de-levelled intersection in the zone of the interchange “Obrenovac”.

In the area of the spatial plan, for the entire fast route, the road route is planned and designed for a speed of 100 km/h, as said in the Spatial Plan.