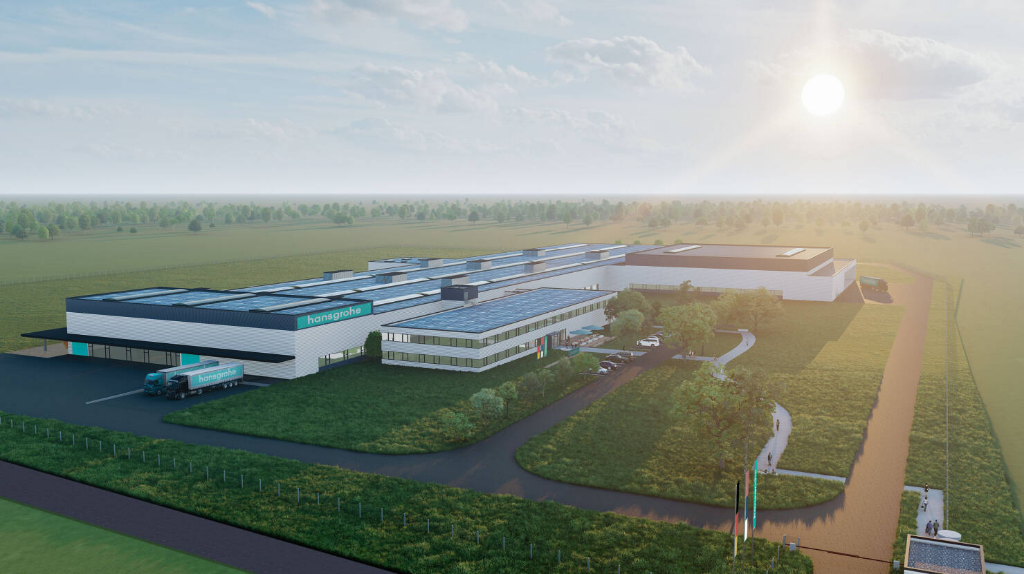 (Photo: Envico/screenshot, projekat izgradnje pogona za proizvodnju slavina u Valjevu.)
The famous German sanitary fittings manufacturer Hansgrohe has filed a request to the Ministry of Environmental Protection for determining the scope and the contest of the study of the environmental impact assessment of the project of the construction of a facility for the production of faucets in Valjevo.

The location requirements for the first phase of the construction, which entails the production facility, storage and administrative space on 22,390 m2, were obtained last summer.

The carrier of the project is Hansgrohe, and the consultant is Envico doo Beograd.

The planned facility for the production of faucets will be located in the territory of Valjevo within the business zone, in the east part of the city. The total area of the parcel is 130,700 m2.

The project plans a production capacity of 4 million fittings bodies, namely, 3 million brass bodies and around a million zinc components (bodies or handles) a year.

It is noted that the estimates of the quantities of materials do not encompass the already used materials in the second production cycle (for example, recasting the inlet system or waste metal), which means that the majority of the faucets produced in Valjevo will be made of pure, “virgin” brass.

The further processing (galvanization) will, as noted, initially be done by external suppliers, whereas, at a later period, it will be done in the location of the factory.

– In each technological phase, it is generally possible to include external partners, which, in principle, means that each of the five represented technologies can be implemented either internally or by another party, where the aim is to meet the changeable demand – the document points out.

It is said that highly automated robot lines will be used in the production process, and the production technology will be the same as the one that Hansgrohe uses at its facilities in Germany and China.

The investment of the German giant in Valjevo was announced last autumn, when an agreement was signed between the Ministry of Economy and Hansgrohe.

It was said at the time that the investment would be worth EUR 85 million and that up to 1,000 people would be employed at the new factory, and the opening of the facility was announced for 2022.