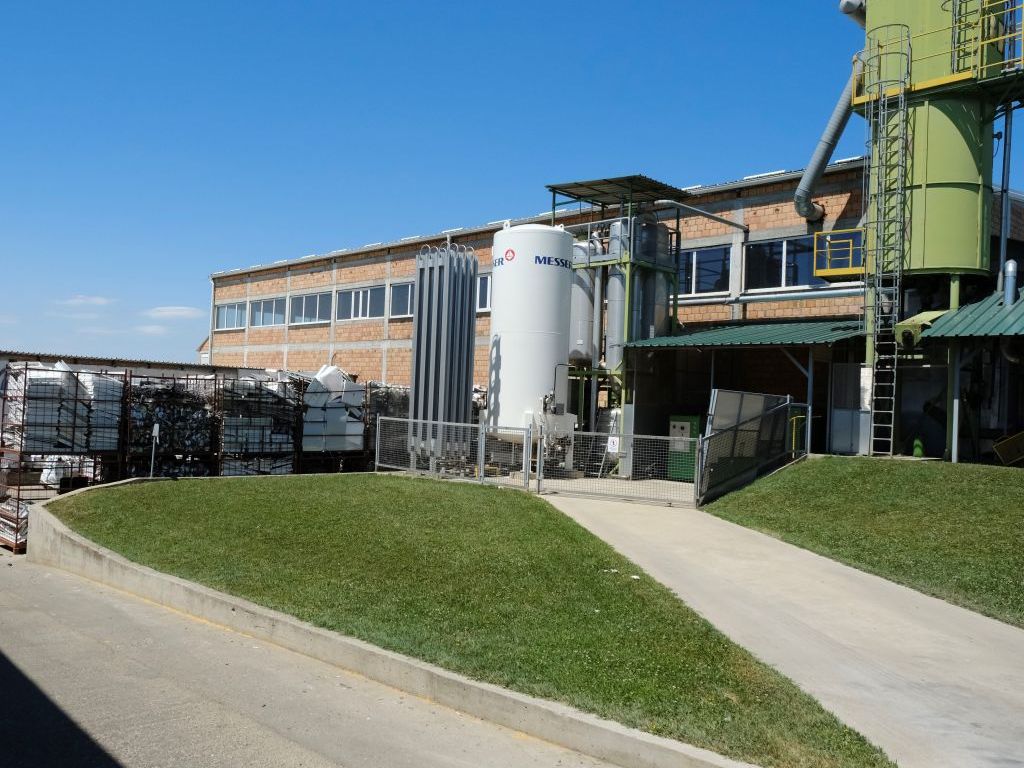 (Photo: Promo)
The company Bozic i sinovi d.o.o. was founded in 1985, and since 2006, it has been managing electrical and electronic product waste, which comprises a special waste flow following the use of the products.

Based on the permits issued by the relevant organs, the company collects, transports, treats, stores and re-uses waste of all grades of electrical and electronic products, which also includes waste from fluorescent tubes containing mercury, lightbulbs and other lighting devices.

The treatment, that is, the re-use of the waste is done at innovative facilities using a sophisticated technology that secures the handling of waste in line with environmental protection requirements.

Capacity expansion and treatment of 10,000 tons of waste a year planned

According to the latest data of the Environmental Protection Agency, around 42,000 tons of electrical and electronic waste is treated each year in Serbia. Over a ten-year period, the quantity of the treated electrical and electronic waste increased nearly 6 times, from around 7,000 tons in 2011. The plan of Bozic i sinovi d.o.o. is to treat over 10,000 tons of waste a year, reveals the director Nikola Egic.

– The capacity of waste treatment has changed in the past years, depending on the current equipment. Last year, we treated 5,300 tons of electrical and electronic product waste. We are also planning to expand the capacities, with a facility for the treatment of several grades of waste, which is currently being assembled, and we hope that we will treat more than 10,000 tons of waste a year – Egic points out.

Technological changes and changes in the market approach of producers and users of electronic and electrical devices are leading to a constant growth of the quantities of this type of waste. The amount of electronic waste grows 3-5% a year, which is four times as fast as municipal waste from households. Of the total amount of waste in the world, electrical waste comprises around 5%, and the growth rate increases every year. The matters which electronic and electrical waste contains make it hazardous to the environment and people’s health. By being disposed of improperly, these matters get into soil, ground waters, waterways and air.

– Recycling is a modern form of mining. By recycling electrical and electronic waste, we are not just preventing direct environmental pollution, but also reducing the need for using new natural resources, that is, the need for further damaging the nature, by sticking to the principles of circular economy and a circular re-use of the materials – Egic reminds.

Waste mustn’t end up at landfills

Electrical and electronic products are used by natural persons at households for the purpose of meeting various needs, while legal persons own a wide range of these products for the purpose of carrying out their core activity, so we are all, privately or through a business, producers, that is, generators of EE waste. On a national level, a network for the collection of this type of waste needs to be secured. The network needs to cover all waste generation points, distributors-traders, collection-recycling yards, campaign-based collection in public places, collection operators, storage operators, waste treatment operators and all the spots per need at the current moment.

– Waste mustn’t be allowed to end up without control outside the legal and legitimate collection networks, thereby ending up where it doesn’t belong in an illegal way and without control, at operators which don’t have adequate equipment for the treatment of this type of waste, and having parts of the former product manually removed for the purpose of using them as secondary raw materials, whose price is usually high, on the waste’s illegal path away from the waste disposal site. Practically, those parts nearly always contain hazardous matters, which, when forcibly removed, uncontrollably harms people’s health and the environment – Egic explains.

According to him, the response of legal persons when it comes to the treatment of this waste is satisfactory, especially since, in Serbia, one gets financial compensations for the settled obligation.

– There has to be intensive work on the network and the measures of collecting this type of waste from a natural person in order for the implementation of the abovesaid to be possible, that is, to collect as much waste as possible. Both here and in the world, this job is done by private companies whose business model is of the highest priority. Without it, a company cannot survive – Egic says.

How electric and electronic waste is treated

Recycling formally means separating and extracting materials from which the former product was made. For non-hazardous waste, manual disassembly can be done, the quality of the output is high, but the treated quantities are questionable. Hazardous waste can be manually treated to a smaller extent, and the extraction-valorization or inertization or hazardous matters in waste is not possible without special-purpose sophisticated equipment. Hazardous matters in waste come in all three states, and gaseous and liquid matters require equipment.

Bozic i sinovi d.o.o. does not dismantle EE waste. Waste is treated in the full sense of that word, all gas effluents are valorized, regardless of whether they are features in the external installation or inside the insulator, whose function is to preserve the state of the material for which the former product was constructed and made. Only a few other operators own this kind of equipment for the treatment of EE waste with a full valorization of all kinds of gaseous, liquid, as well as solid hazardous and powdered matters.

Bozic i sinovi d.o.o. only company in the region with lightbulb treatment facility

In addition to EE waste, the company Bozic i sinovi d.o.o. also treats lightbulbs. Lightbulbs are for the most part hazardous, and while newly produced lightbulbs might feature no hazardous matters in them, they can lead to great problems if they are not treated in line with their characteristics.

By its shape, a lightbulb is bulky waste, easily breakable and as such not easy to collect, but for environmental protection reasons, it is necessary for that waste to be brought to authorized operators to be treated in the proscribed manner. 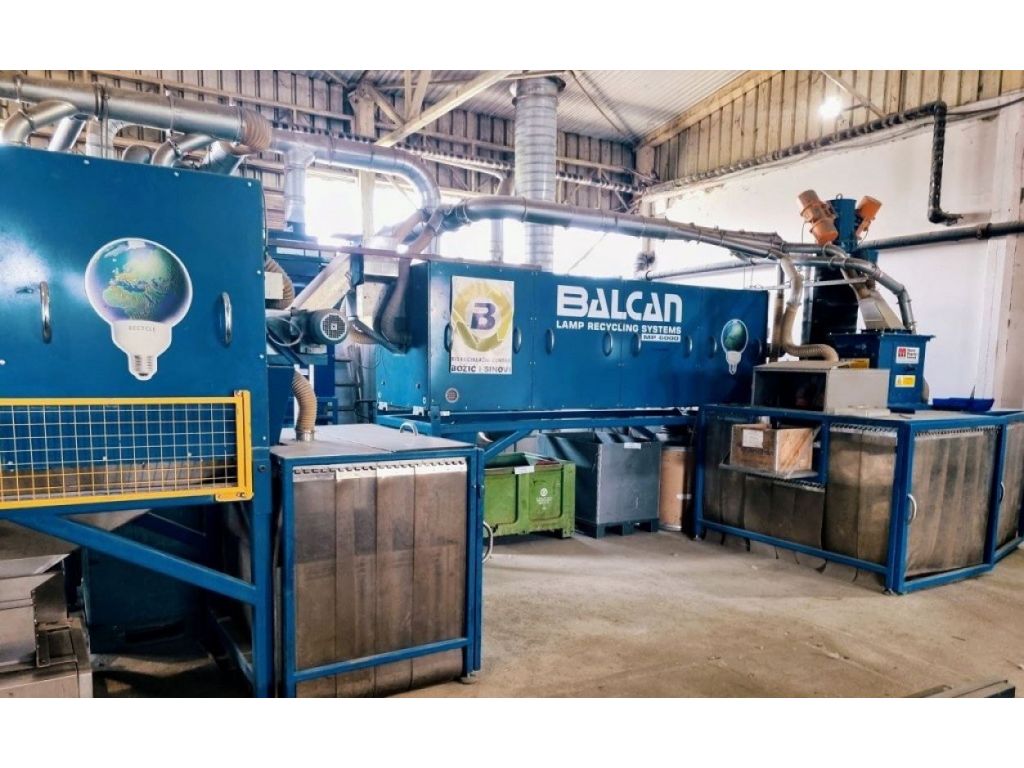 (Photo: Promo)
– We are the only ones in the region to have a facility for the treatment of this kind of waste. The facility, which carries the tag “BALCAN Total Lamp MP6000” is meant for total recycling of fluorescent tubes and all kinds of lightbulbs, and it has been imported from England, from the company “Balcan Engineering Ltd”, a company which has won the Queen’s Award for Enterprise in the “Innovation” category. Thanks to its capacities, the facility recycles 6,000 “sources of artificial light” in only one hour of work, including: fluorescent lamps, lightbulbs, energy-saving lightbulbs, projection lamps, infrared lamps, wolfram halogen lamps, miniature car lamps, UV lamps, lights that are used to light stages and for making photographs, flashlights etc. – Egic explains.

The term total recycling entails that, after the lightbulb waste is treated at this facility, all the recycled waste can be reused as a raw material, that is, for the production of new materials. For example, since the new facility enables the subsequent usability of all lightbulb components, it means that one fluorescent tube (of an average weight of 200 grams), through recycling, can produce 88-93% glass, 12 grams of non-ferrous metals, iron and plastic, 5 grams of phosphorous powder, a very small percentage of mercury evaporations (which, extracted that way, are inertized), so, perfectly clean raw materials ready for further use.

– This facility can treat over 30 million lightbulbs annually, depending on the facility’s operation mode. Considering that eight million lightbulbs of various kinds are planed on the market of Serbia annually, and that lightbulb waste of Croatia, Montenegro, Macedonia and Bosnia amounts to 11.5 million bulbs, it is obvious that “BALCAN Total Lamp MP60000” can make Serbia the regional center in this field of recycling – concludes the director of the company Bozic i sinovi d.o.o., Nikola Egic.