Krone semi-trailers for the transport of containers - Box Liner eLTU 4 (Photo: Miloš Majić)
In Serbia, SEJARI doo is the general representative of KRONE as a producer of trailers, semi-trailers and reefer trucks. Thanks to the quality of the products, KRONE has a large number of loyal and satisfied customers in Serbia. The Serbian market is very important for this kind of vehicle, due to both the geographic position of the country, between the east and the west, and the numerous companies which carry out international transport activities.

KRONE Group is one of the leading producers of trailers and semitrailers in Europe. The factory of commercial vehicles is part of Bernard Krone Holding, with the seat in the Emsland district.

Since its very founding in 1906, the KRONE factory has been owned by the family whose name it carries. Bernard Krone, the CEO of the factory in Werlte, is a representative of the fourth generation which successfully runs this family company.

The current ranking list of the international magazine Global Trailer for 2021 names KRONE, with around 45,000 produced vehicle units a year, as one of the four biggest producers of trailers in the world.

KRONE Group employs over 5,300 people and realizes sales of EUR 1.9 billion (financial year 2019/20). Aside from Emsland, KRONE also has seven production facilities in Germany, Turkey and the Netherlands.

– We offer optimal solutions for all transport requests with trailers that set standards in terms of innovations and quality. Simple and safe handling, tested components, first-class manufacture and long-term protection through the KTL plus powdered coating, make KRONE vehicles an investment that definitely pays off – Dr Frank Albers, Managing Director of Sales and Marketing at the company, explains the successful KRONE philosophy.

With its Liner family, KRONE covers the most important segments in road cargo transport: the Profi Liner semi-trailer with a flat platform, the Cool Liner refrigerated semi-trailer, a case for dry cargo transport, the Box Liner container chassis. They can all be configured in numerous practical varieties, thanks to the modular system. This also pertains to the Load Carrier trailers and chassis, as well as the KRONE long truck. The fully renewed Mega Liner is available for maximum volume, which is necessary, for example, in automotive logistics and beverage logistics. 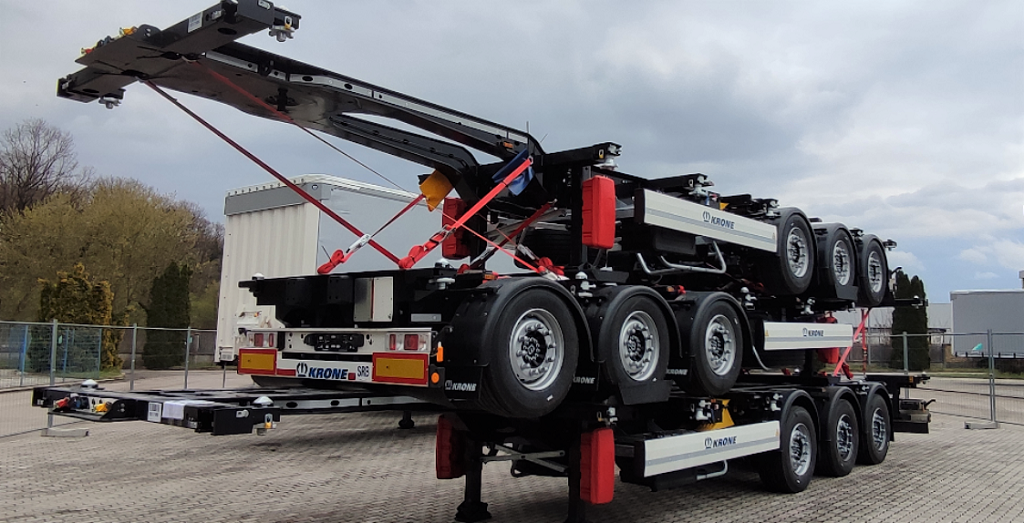 eLTU 4 model meant for the transport of 20, 30 and 40-feet containers (Photo: Miloš Majić)
The most important characteristics of the new generation of Profi Liner vehicles are flexible modular solutions, numerous pre-galvanized components, a robust structure with an own weight under 6 tons, as well as a low force in handling the sliding curtain and the rear portal. There is a suitable semi-trailer with flat platform for every application: from an all-purpose Profi Liner to experts such as Paper Liner, each with sophisticated equipment for securing the load.

With the KRONE Trusted brand of spare parts, introduced in early 2021, fixing older trailers pays off as well. The tested branded spare parts are up to 50% cheaper than original spare parts.

KRONE provides its customers with excellent service support and supplies them with spare parts, thanks to the flawless organization of the after-sales network. Throughout Europe, they have 11,000 partners that are available to customers.

In addition to its production activities, KRONE aims to protect the environment, and, to that end, entire teams of constructors and researchers work on systems which enable a comfortable use of vehicles, but also a high degree of protection in the sense of reducing the emission of harmful gases, noise, minimizing the waste and waste waters in production.

To us, the world of tomorrow is the priority – as a responsible and conscientious producer, KRONE has set high environmental goals for the future for itself.