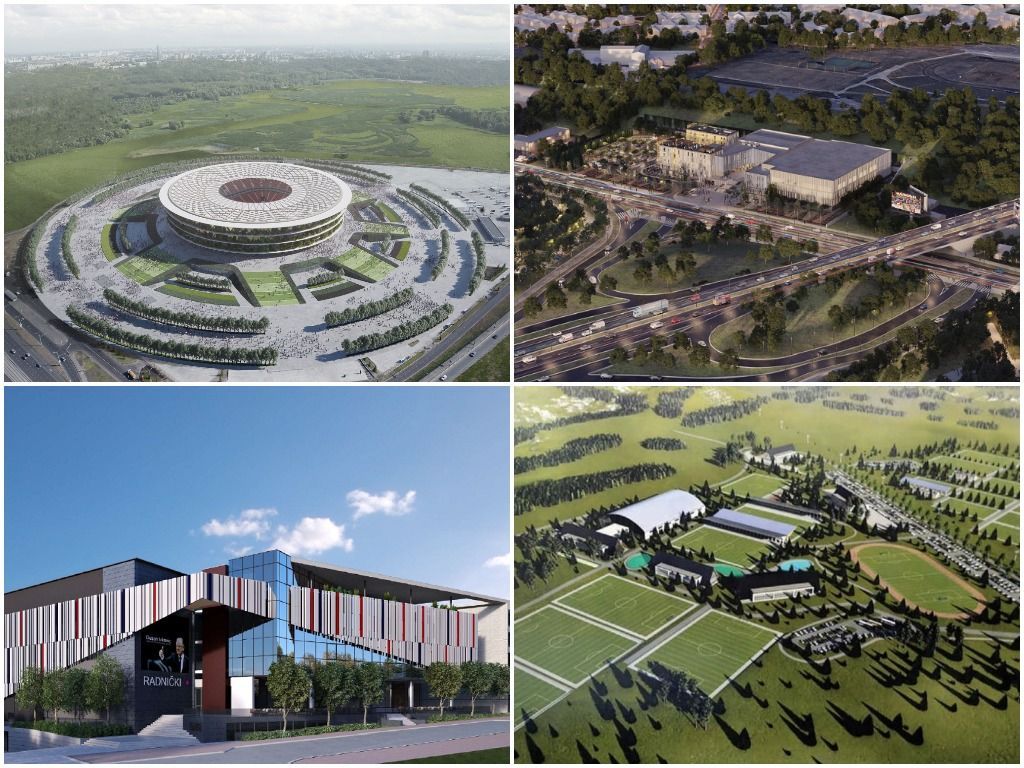 National Stadium, Volleyball Training Center, Sports Society Radnicki Complex in Crveni Krst, Sports Center Zlatibor (Photo: Ministarstvo finansija, Urbanistički projekat/ Energoprojekt Urbanizam i arhitektura, Milan Stamatović/ Facebook, Centar za planiranje urbanog razvoja CEP)
The announced mass construction of stadiums in Serbia is still on hold. Aside from the beginning of the construction of football stadiums in Leskovac, Zajecar and Loznica, there are no concrete works in other towns so far. It seems that the pandemic has postponed the planned works in Surcin, but also in Novi Sad, Kragujevac, Kraljevo…

The project of the construction of a national stadium in Surcin, like many other things in the past year, has been divisive. While some traditionally advocate using the money for other, more urgent, purposes, others hope that the participation of domestical football and basketball clubs in European tournaments and the qualification of Serbia’s national football team for the World Cup will incite works on the local sports infrastructure, including the construction of the national stadiums.

As we said, there are currently no works, or at least not any major ones. But there are plans – spatial and urban plans, and we present those that eKapija’s readers found the most interesting.

As was the case the previous year, the first on the list of projects in sports that you read about with great interest is the project of the construction of the national football stadium in Surcin. The Ministry of Construction, Transport and Infrastructure had opened the public review of the draft spatial plan of the special purpose area of the national football stadium in Surcin.

The spatial plan envisages for the capacity of the stadium to be 52,000 seats, with the possibility of securing an additional 8,000 temporary (auxiliary) seats for the purpose of meeting the FIFA and UEFA criteria for large and important football events. So, up to 60,000 spectators.

The construction of the national football stadium was announced in mid-2022 for 2021. It was also said at the time that the stadium would be located close to the Milos Veliki highway and the Belgrade-Surcin road. Previously, it was announced that EUR 250 million had been set aside for this purpose. Its design was also presented, and the project was also criticized.

In November 2021, the president of Serbia, Aleksandar Vucic, also announced that the construction would begin by the end of the year, but all things considered, it seems that the first activities in Surcin will not take place before this spring.

The construction of the Volleyball Training Center in New Belgrade has also been announced. The project encompasses an area of 21,380 m2 along Tosin Bunar Street, and the Office for Public Investment Management opened the tender for the preparation of the technical documentation and the construction. The value of the tender is estimated at RSD 2.2 billion.

3. Sports Center with 19 Courts for Training of Local and Foreign Football Teams on Zlatibor

In the past years, Zlatibor has become one of the central destinations of mass tourism. Based on that development, numerous projects have been launched lately with the aim of developing other forms of tourism offer for which there are great potentials.

Among the news concerning Zlatibor is the construction of a big Sports Center for the preparation of local and foreign football teams. According to the president of the municipality of Cajetina, Milan Stamatovic, the construction of this center could begin as soon as 2022.

The Municipality of Cajetina also opened the tender for the preparation of project documentation for the construction of the Sports Center in October. According to the project task, a football center which will consist of a stadium, football center facilities, a football hall and an auxiliary court, a track and field court, premium and standard training zones and a pedestrian zone with a sports avenue is planned as the central feature of the future activities of training and preparation of football teams on Zlatibor.

The complex of the Sports Society Radnicki in the Crveni Krst neighborhood in Belgrade will be reconstructed and expanded, according to announcements. According to the project, in the location in Vojvode Supljikca Street, the plan is to build a whole new, modern sports facility with a hall of a capacity of 1,000 to 1,200 spectators, sports courts and training halls, as well as offices for the managements of the clubs, spaces for training and seminars, as well as a museum space.

The Government of Serbia’s Office for Public Investment Management has opened the tender for the construction of a new complex, and the value of the works has been estimated at RSD 2.4 billion. 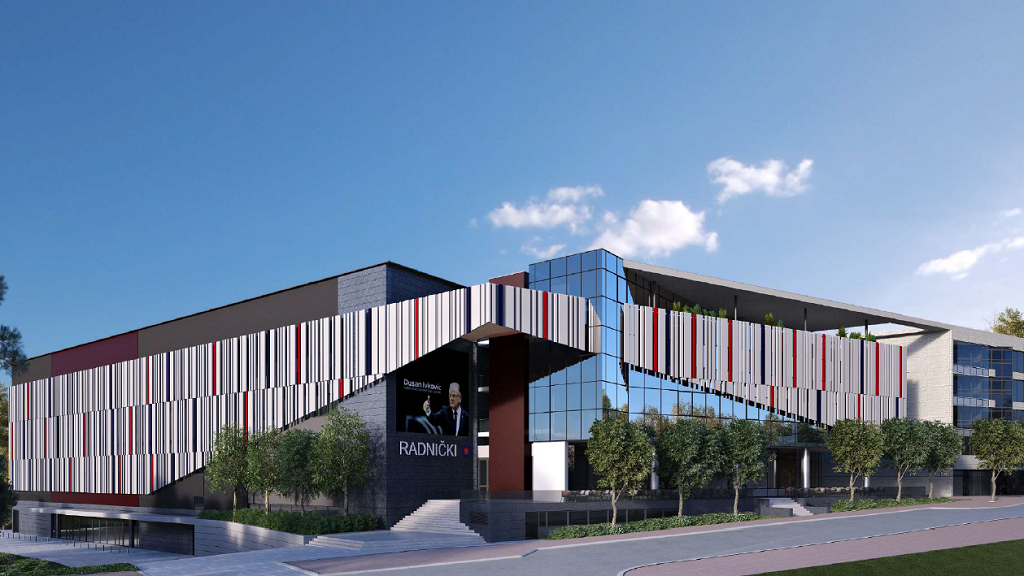 One of the projects that was finished last year is the one in Backa Topola, where one of the most modern sports courts, TSC “Arena”, opened. Its construction began in 2017 and it features the central court of the TSC Football Academy.

The stadium’s capacity is 4,500 spectators. A sum of EUR 10 million was invested in the construction of the Football Academy, without the stadium, and the entire investment will cost around EUR 15 million.

Barcelona’s basketball player Nikola Mirotic wants to contribute to the development of the city of Pirot by investing in rural tourism, and he has also announced the construction of a basketball arena, a ski track and a hotel complex.

According to announcements, the hall will feature a gym of 200 m2 with a view to the court, stands of a capacity of 168 spectators, locker rooms, toilets and other auxiliary rooms. An outdoor basketball court is also planned, which is to be accessed through the hall and also feature the stands with 168 seats. A parking area for 30 vehicles is planned in front of the hall. 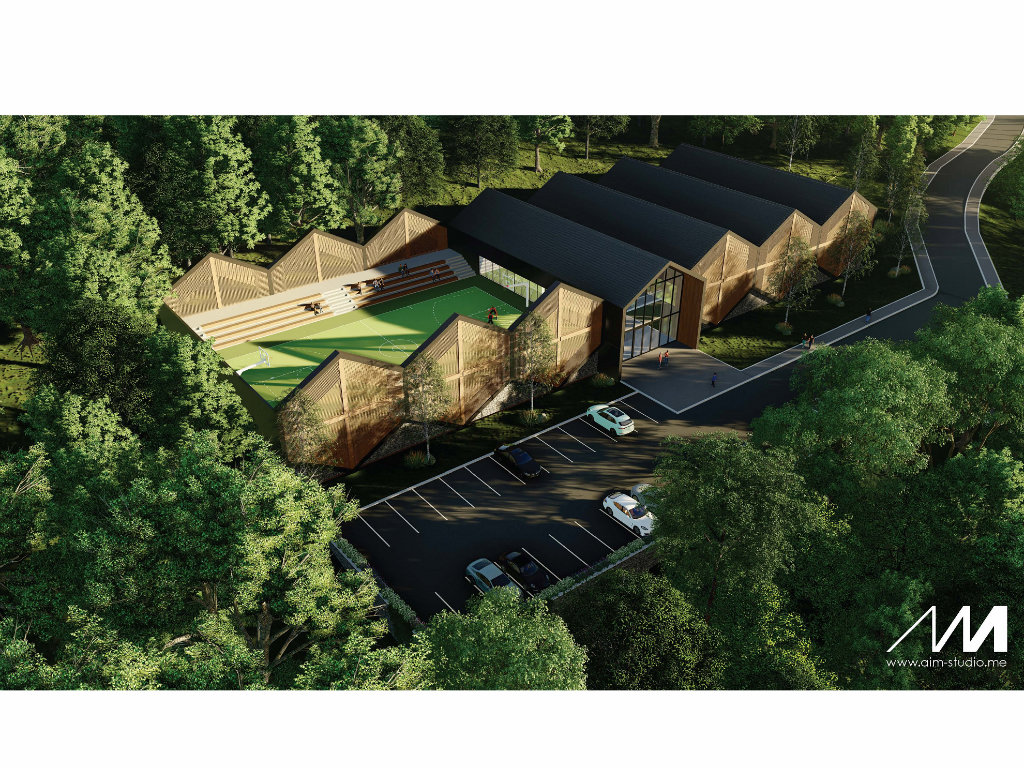 The hall and the outdoor court (Photo: AIM Studio)

7. Sports-School Complex with a Pool in Arandjelovac Center

In the municipality of Arandjelovac, the plan is to establish a new ambient unit, consisting of the Sports and Recreation Center “Sumadija”, the “Milan Ilic Cica” Elementary School, the “Milos Savkovic” Gymnasium and the “Petar Ilic” Music School.

The area of the future complex takes up 3.4 hectares.

The completion of the long-announced project of the National Water Polo Training Center in Vrnjacka Banja was mentioned again in August 2021. At the time, the president of the municipality of Vrnjacka Banja, Boban Djurovic, said for eKapija that the works could begin in 2021 or 2022.

Again, the state’s help in completing the works was announced.

Toward the end of 2021, the City Administration for Construction Land and Investments of Novi Sad published the tender for the first phase of the construction of a track and field stadium with a part of the accompanying infrastructure and a substation with a generator. The total estimated value is RSD 305,000,000.

The complex will feature athletics fields, a stadium, auxiliary courts, a warm-up space, tracks and playgrounds for children, a parking lot, as well as courts for other sports such as tennis and futsal. The facility will be located between Draska Redjepa Street and the future extension of Bate Brkica Street. 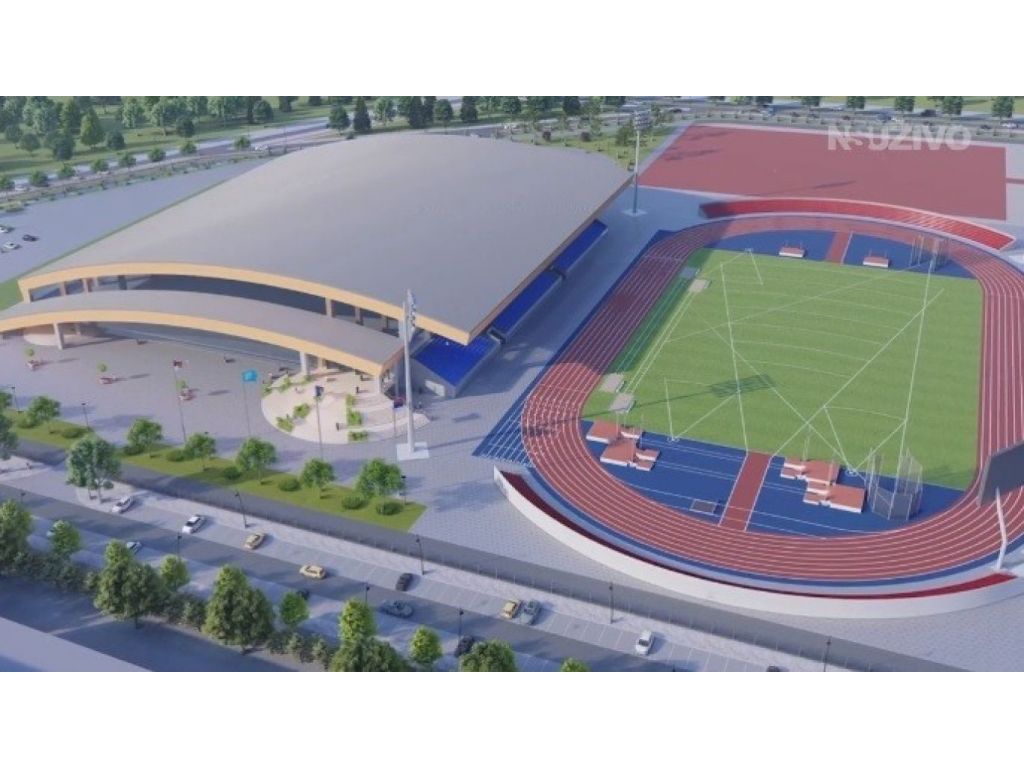 The City Administration for Building Land and Investments of Novi Sad also opened the tender for the construction with the preparation of the technical documentation for a sports complex in Futog, as a turnkey project. The job is worth RSD 1.56 billion.

According to the project task, the sports complex is planned to feature an indoor pool facility, a hospitality facility, outdoor sports courts, accompanying infrastructure and internal traffic routes.

We presented the ten investments that our readers found the most interesting when it comes to investments in sports. Make sure to take a look at the full list HERE.