RES Serbia 2021: What do renewable energy projects look like in practice? – Building permits for wind farms difficult to obtain 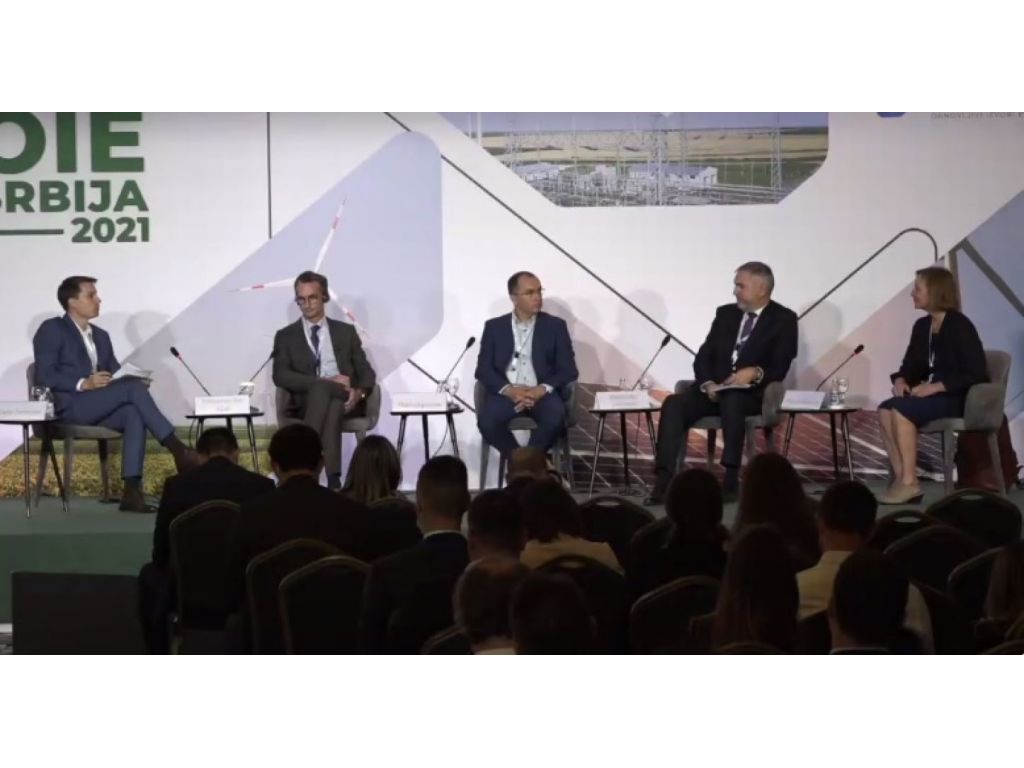 Damir Dimitrijevic – moderator, Emmanuel Van Vyve, Marko Liposcak, Aleksandar Jakovljevic and Bonnie Norman (Photo: Print screen / Zoom)
The complicated process of issuing building permits for wind farms, but also the strict requirements for working permits, are the obstacles that investors face in Serbia. They praise the clearly defined dates which concern the adoption of the bylaws that will regulate the law stipulations, but also the announced auctions.

This was said at the conference RES Serbia 2021 by Emmanuel Van Vyve, the director of business development at the Belgian company Elicio, who noted that they had wind farms with a total capacity of 50 MW in Serbia, which are already operational – Malibunar and Alibunar.

– We have another 200 MW in an early planning phase. These are various projects and I hope that we will be ready for the auctions – Van Vyve added.

Marko Liposcak, the director of business development at the Israeli company Enlight, presented the Pupin project, which is an expansion of the Kovacica wind farm.

– We got the permit easily, because we used the experience acquired until then, so we are optimistic when it comes to the development of RES projects in Serbia. Initially, there were plenty of things that were not clear, but the processes are now set quite well. The new challenges have to do with how to structure the investments, how to put the energy into the network, in the sense of new regulations and auctions and how to fit them into a reasonable inexpensive package for investment – Liposcak said.

He also pointed out that it was important for projects to develop locally and that the team is competent enough. He also noted the importance of predictability – knowing what the state wants and what the goals are and how to achieve that.

– As for the region, the states are technically well connected, and the prices vary minimally. They also need to be connected in terms of a market. The level of knowledge needs to be raised in smaller markets, especially when it comes to risk assessment – Marko Liposcak concluded.

Biomass as potential for employment of thousands of people

The president of E3 International (E3I), Bonnie Norman, talked about the importance of biomass, saying that the focus was on restoring the land.

RES Serbia 2021 – What is important in the process of the energy transition and decarbonization of Serbia and the region?

RES Serbia 2021 - By 2040, Serbia will produce a minimum of 40% of electricity and heat from renewable sources

– There’s 1.6 million hectares of degraded and neglected land in Serbia, where food cannot be produced, just like at landfills. This is the case with Vojvodina and with the Kolubara District, where we are doing a big project – she said.

She reminded that biomass and bioenergy aimed to improve the quality of air, but also that they were the potential for the employment of thousands of people.

– Bioenergy plantations pay off in two to three years. It takes little maintenance, and there’s a great money flow, which is very interesting for agriculturists – Norman pointed out.

Elektroprivreda Srbije (EPS) sees the transition toward RES as realistic and sustainable and the plans and the transformation of the production portfolio will be such as well, said the director for strategy of the PE EPS, Aleksandar Jakovljevic, during the conference RES Serbia 2021, and you can read about the plans in a separate article.

The conference RES Serbia 2021 was held in Belgrade on September 15, and the organizers were the RES Serbia association, in cooperation with the general partner, the European Bank for Reconstruction and Development (EBRD).

The eKapija business portal was one of the media sponsors.

Log in to view complete information:
Forgot your password? Click here HERE
For free test use, click HERE
Latest
Most read
Indoor Catering Facilities Not Prepared for Covid Passes – Education for Implementation of New Measures Missing 26.10.2021.
EPS New Member of RES Serbia 26.10.2021.
Connecting of Sarajevo, Podgorica and Tirana by Rail Being Planned – Negotiations About Construction of Railway from Capljina to Niksic to Begin 26.10.2021.
Industrial Zone to be Built Instead of Flea Market in Vrsac 26.10.2021.
Belgrade Waterfront – Global Scale Project in the Heart of Belgrade 18.10.2021.
Reconstruction of Kej Oslobodjenja Street in Zemun to Begin – Here’s What it Will Look Like (PHOTO) 25.10.2021.
State Aid Approved for Chinese Xingyu Which Will Build New Factory in Nis – EUR 60 Million to be Invested in Facility for Production of Vehicle LED Lights 26.10.2021.
Tender for Preparation of Project-Technical Documentation of New Block of 350 MW at TPP Kostolac 25.10.2021.
Weather
Weather forecast