RES Serbia 2021 – What is important in the process of the energy transition and decarbonization of Serbia and the region? 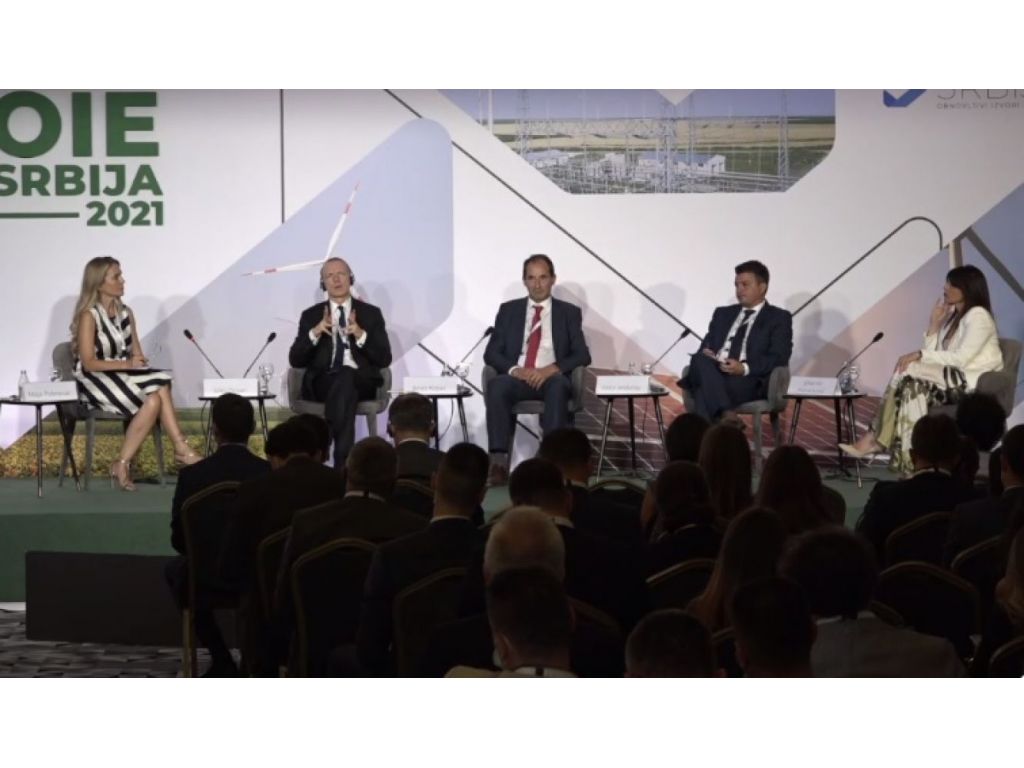 Maja Pokrovac – moderator, Giles Dickson, Janez Kopac, Viktor Andov and Jovanka Atanackovic (Photo: Print screen / Zoom)
Although the region of southeast Europe depends on coal for production of electrical energy and the emission of harmful gases exceeds that of the EU multiple times, the energy transition and the process of decarbonization are accelerated, it was said at the RES Serbia 2021 conference.

– It is necessary to tax carbon-dioxide emissions, to use the revenues for the purposes of the transition, because there is not yet a systemic source of money. That will be a big social problem, so it needs to be solved as soon as possible. The EU expects the same transition tempo from the Balkans, but help is needed, because the budget is not the same. This needs to be combined with the domestic measures and the taxation of emissions – believes the director of the Energy Community Secretariat, Janez Kopac.

He also noted that the goals, when it comes to the numbers, were changing very rapidly and that they would not be clear in the current year either. However, he said, that leaves room for the countries in the region to decide on their future themselves, through their own plans.

North Macedonia is the first country in the region to decide to stop using coal. They have made the idea concrete through the planned EUR 3.1 million for RES projects in the period up to 2027 or 2030, and the oil tax has been implemented as well.

– We started the reforms in 2017. A new law on energy, regulations and bylaws were adopted. We implemented a new model for supporting RES. Parallel with this, we prepared a contest for the construction of solar factories, with the support of the EBRD and there was a great interest from companies from the EU. We adopted an energy development strategy, the first in the region, which is fully harmonized with the green agreement – Viktor Andonov, adviser to the prime minister of North Macedonia, summed up what had been done up till then.

He pointed out that the government would provide a legal guarantee to strategic investors thanks to the law on special investments, whereby it will provide them with security. He also announced that they would work with foreign investors on wind farms, whose total capacities will be nearly 500 MW, and the investment will be 2 to 3 billion euros.

Giles Dickson, CEO of Wind Europe, emphasized the importance of the quick issuing of the building permits for the construction of wind farms, but also the necessity of optimally clear and secure auctions, which will only then be interesting to investors.

– The CFD model is the best, because it gives a clear perspective of stable revenues. If you rely on market revenues, the banks will not give loans that easily, because the price of financing is higher compared to mutual premiums – he said.

The bankers at the second panel agreed with this, emphasizing that the predictability was the most important factor for loans issued for a large number of years.

Dickson also emphasized that wind power created jobs in rural communities and that the retraining of miners in Poland should act as an example for others.

Giles Dickson, CEO of WindEurope - Switching from coal to renewables is feasible, look at Poland

RES Serbia 2021 - By 2040, Serbia will produce a minimum of 40% of electricity and heat from renewable sources

Three-year auction plan by the end of February 2022

Jovanka Atanackovic, the state secretary at the Ministry of Mining and Energy, emphasized the importance of working on regional projects and exchanging experiences. This, she emphasized, gave Serbia a flexible law which enables the implementation of various mechanisms with one goal.

– By the end of October, all the bylaws will be adopted. Auctions will be electronic, thanks to the modern software which is being developed. By the end of February 2022, we will have a three-year plan of auctions – Atanackovic said.

She clarified that auctions will be important for attracting investors through the provision of premiums, and potential direct agreements between the producer and the consumer are envisaged as well, which, as Atanackovic said, will be especially important for the industry.

– Strategic partnerships, where the state offers the land and all the other amenities, are possible as well – she added.

She emphasized the issuing of green bonds on Thursday and also reminded of renewable hydrogen, because the state is undertaking a hydrogen strategy in cooperation with the German government.

– An investment plan worth EUR 17 billion in the fields of energy and mining has been made and joined by private investments concerning RES as well – Jovanka Atanackovic concluded.

The conference RES Serbia 2021 is being held in Belgrade, and the organizers are the RES Serbia association, in cooperation with the general partner, the European Bank for Reconstruction and Development (EBRD). The eKapija business portal is one of the media sponsors.