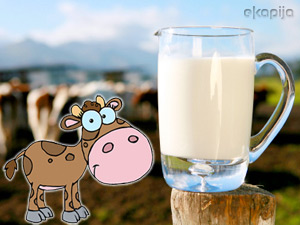 Representatives of 22 large milk manufacturers, which deliver total of 150m liters of milk every year, formed an association on Friday (August 20, 2010) in order to solve the problems in that sector and enable sustainable development of production.

Ljubisa Jovanovic, the Chairman of the Managing Board of the Association of Milk Manufacturers of Serbia, announced that a platform, in which the situation would be presented and systematical long-term solutions suggested, would be prepared within next two or three weeks.

He pointed out that that platform would be forwarded to the ministries of agriculture, economy, finance, and trade, so they could together find the best solutions.

Jovanovic stated the the members of the association were not going to spill milk or discontinue deliveries to dairies because it would not solve the problem.

Formation of the Association, as he explained, is also backed by PKB, which should formally join that organization within next ten days or so.

According to Jovanovic, the members of the association deliver 400,000 liters of milk on daily basis, they have about 40,000 cows and about 6,000 employees.

The estimates are that 1.1 billion liters of milk are produced in Serbia every year, while dairies received about 850m liters of milk last year, about 20% of which was delivered by big farms.

The founders of the Association of Milk Manufacturers of Serbia are: Velvet Farm, Topola from Banatska Topola, Napredak from Stara Pazova, PIK Becej, Nicoagrar from Banatski Brestovac, Almeks from Pancevo, Klas, BD Agro from Dobanovci, Budućnost from Backa Palanka.