Construction of Sports Town in Bezanijska Kosa to Start Next Spring, More Than EUR 15 Million to be Invested – We Reveal the Features of the Future University Sports Center 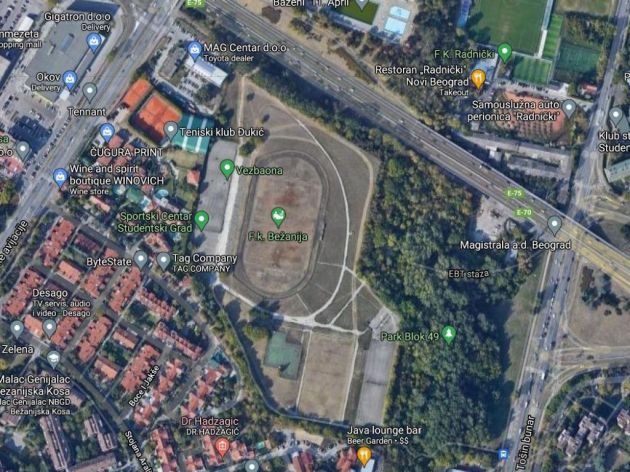 Satellite image of the location (Photo: Kancelarija za upravljanje javnim ulaganjima/ Projektni zadatak)
Within the complex of the future University Sports Center in Bezanijska Kosa, which is to be a real sports town, two sports halls are to be built, an athletics courts, as well as tennis and basketball courts, and in addition to sports features, the plan includes facilities with accommodation capacities.

The public procurement of the service of the preparation of the project-technical documentation is in progress, and after the designer is selected, the deadline period for the preparation of the documentation is 90 days. The opening of the public procurement procedure for the contractors, but also the designers of the project for the building permit and the final project, under the turnkey system, is expected for the end of the current year, eKapija learns from the Office for Public Investment Management.

– We can say that, ideally, the works could begin in the spring next year (April or May), under the condition that there are no delays regarding the issuing of requirements and approvals by the competent institutions and that there are no problems with resolving legal issues – the office told our portal.

For now, the value has been estimated at EUR 15 million, but the office notes that they believe that that will only cover the costs of the construction of the facilities, whereas the exterior development would require additional costs.

– Considering that this is a large complex, it is impossible to calculate the costs of the works on the exterior development at the moment – they say.

What is to be built in Bezanijska Kosa

The future complex is planned to feature two sports halls, the main one and the auxiliary one, as well as additional covered courts in the form of sports balloon courts. The main hall will have a large court which can be split into three smaller courts, stands, and there will also be a conference zone with several conference halls, a commercial zone and an administrative zone.

The auxiliary hotel consists of two large sports halls which can also be split into three smaller courts (six altogether) and other sports features (table tennis, squash, a gym, halls for dance troupes…).

Of the external features, the plan includes an athletics court which can also be used as a field for soccer, rugby, American football and other grass sports, tennis and basketball courts.

In addition to sports features, facilities with accommodation capacities for students, tournament and conference participants etc. It will be a kind of a campus (students’ home), but won’t be meant for students’ permanent stay, but, for example, for the guesting lecturers, contestants etc.