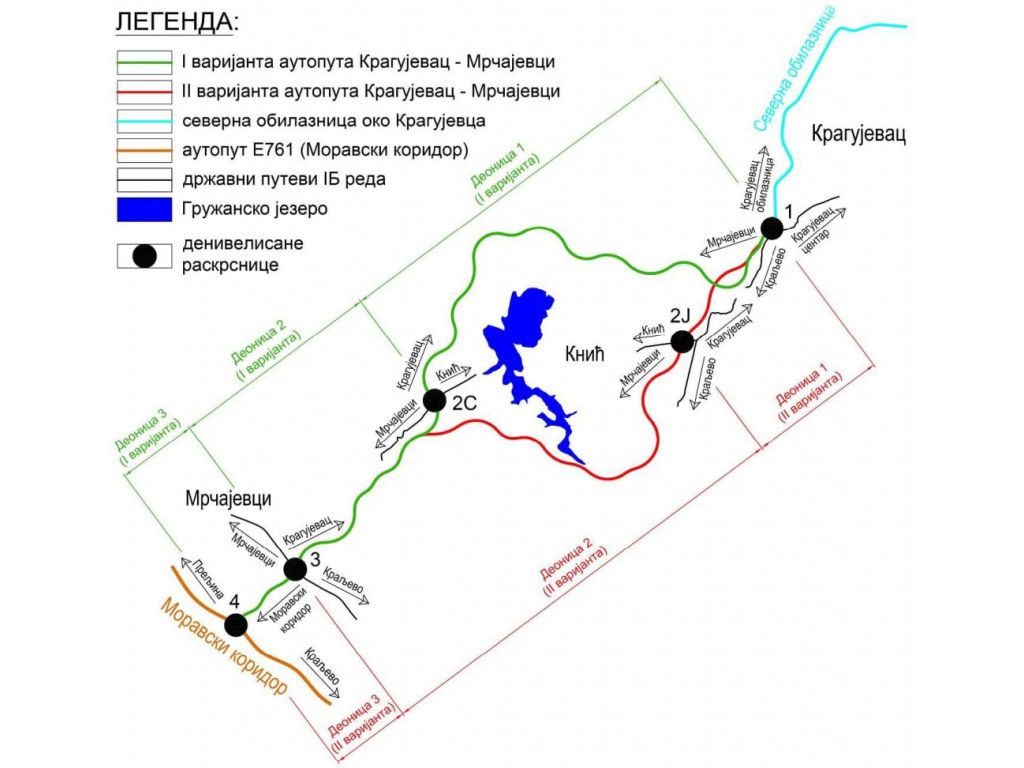 Green marks the selected option (Photo: Facebook.com/šumadijapolis)
The construction of the Kragujevac-Mrcajevci fast route has attracted a lot of attention from the public in Sumadija. Considering that there were two options on offer, a northern route, upstream within the Gruza Lake basin, or a southern route, downstream, it’s no wonder that there’s a great interest in this project.

After plenty of speculation and arguments for one or the other option, the dilemma is finally solved – the Kragujevac-Mrcajevci fast road will go along the northern route through the Municipality of Knic, the PE Roads of Serbia told eKapija.

As they say in a response to eKapija, the feasibility study has already been prepared for this project and it includes the north option.

– For the purposes of the realization of this investment, the General Project and the Preliminary Feasibility Study for the construction of IA-grade state road from Kragujevac to the connection with the IA-A5 (E-761) state road in Mrcajevci (2020) were prepared and adopted by the Audit Committee. The north option for the corridor was adopted as the more favorable one – said the PE Roads of Serbia.

According to the adopted plans, the fast road is to have two lanes of 3.50 meters in each direction (a total of four), with a division lane of 3 meters, the PE Roads of Serbia says.

When it comes to the further steps in the realization of this project, the exact route needs to be defined first, after the spatial plan for the special purpose area is adopted.

– The exact corridor, the profiles and the structures along the road will be defined upon the adoption of the spatial plan of the special purpose area of the infrastructural corridor with direct application and the preparation of the preliminary project – said the PE Roads of Serbia.

The opening of the public procurement procedure for the preparation of the spatial plan is expected only after the strategic documents are adopted.

– We expect the public procurement procedure to open upon the adoption of the Program of Amendments to the Program of Business Operations of the PE Roads of Serbia for 2021 – the company told eKapija.