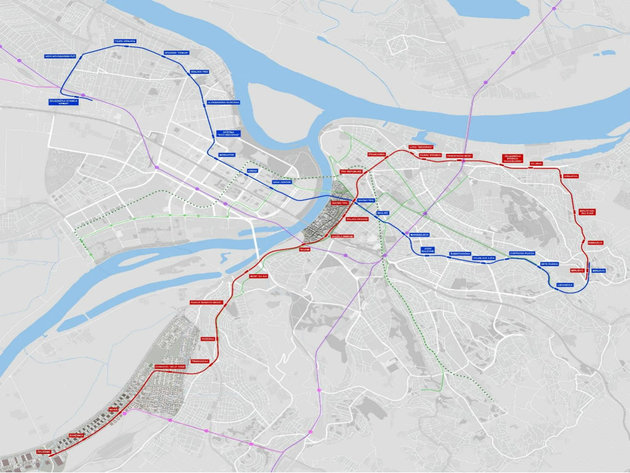 Previous route of line 2, with the final stop at Zemun Railway Station (Photo: Egis)
The PUE Beogradski metro i voz has opened the public procurement procedure for the preparation of the Digital Topographic Plan of Line 2 of the Belgrade Subway. Line 2 of the Belgrade Subway, from the station near the New Bezanija Cemetery to the station in Mirijevo, has a total length of around 21 km with a total of 23 stops. At the end-terminal of Line 2, the construction of a joint depot for lines 2 and 3 is planned, with an area of roughly 38 hectares, which will be located west of the Bezanija Cemetery.

Compared to the previously presented plans (pictured above), then, line 2 has been extended from the Zemun Railway Station to the New Bezanija Cemetery.

The limits of line 2 on the sections between the stations should encompass a corridor 160 meters wide, with 80 meters on each side from the axis. In the zone of the stations, the limits are expanded to 160 meters on each side from the axis, with a total length of 200 meters. As for the depot, the limits encompass an area 80 meters wider than the defined lines for the construction of the depot.

The total area covered by the borders is around 425 ha.

The surveying does not need to encompass the section of line 2 between the Sava Centar and Manjez stations. For that section, which is developed through the Preliminary Project of the First Phase of Subway Line 1, the digital topographic plan was prepared in the past period.