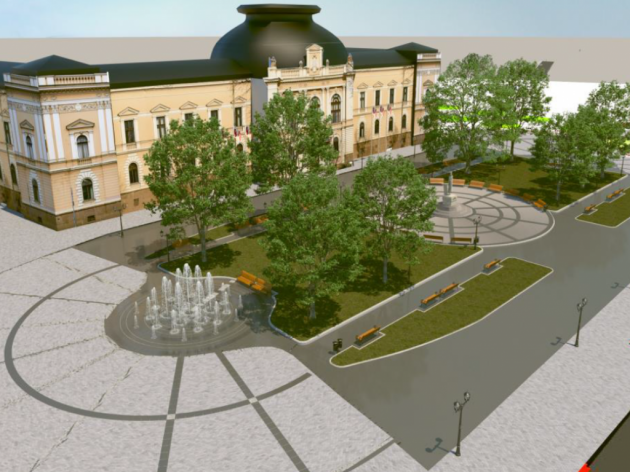 (Photo: JP Urbanizam Kragujevac)
At the request of the City of Kragujevac, the PE Urbanizam from that city has prepared an urban planning for the reconstruction of Trg vojvode Radomira Putnika (a square) and a part of the pedestrian zone in Kragujevac. The total area covered by the project is 6,356 m2.

According to the project, the existing square needs to retain its proportions. In the section of the underground garage, which partially overlaps with this zone, the greenery needs to be brought back to its original state once the construction is finished.

The removal of the traffic route in front of the Court building will increase the capacity of pedestrian routes in this zone and enable a representative access to the Court facility. Due to the increased traffic flow along the 27. marta Street route, the plan is to have an underground pedestrian passage from the plaza in front of the Court towards the building of the Health Institute of Kragujevac (Ured).

The appearance of the existing greenery is not adequate to the location, so a reconstruction is required, entailing development in the form of an open public green area, with the mandatory preparation of a horticultural development project. All types of works on the development of the square require approval by the Institute for Protection of Monuments.

The focus is placed on the sculpture and the fountain, located at the intersection of the axis of the existing square and the one that is to be formed. From the Department Store, the square cascades widely down, bordered by greenery featuring a linear water motif. This motif is also present in the square zone, with water curtains. In designing the linear motifs, care should be taken for the space to look like a developed urban element, and not as an emptied pool, even when there is no water. 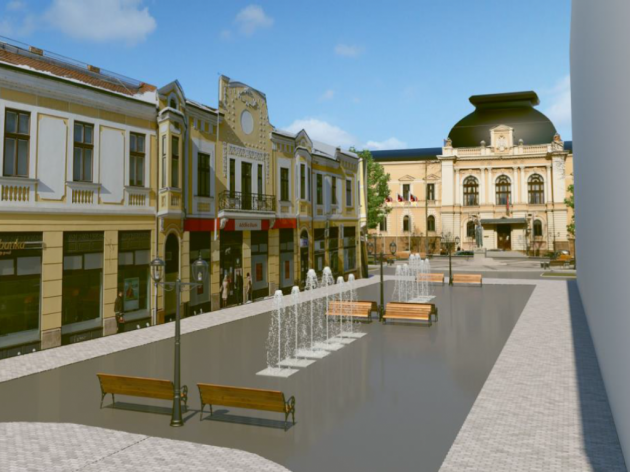 (Photo: JP Urbanizam Kragujevac)
In the section of the existing pedestrian zone next to the “Zlatna ruza” facility, fountains can be installed on the ground level. The activity of the fountains is to be controlled by a special program and accompanied by adequate effects. The technique and the technology of the fountains should be arranged so that, in the periods when they are turned off, the space has a character of a flat paved area – a square, so that the attractive character of the space is maintained throughout the year. In designing the fountains, special attention should be paid to the regulation of water drainage.

The “Prodor” route should be emphasized through paving and lighting (evenly along the corridor). In line with the character of the space, paving with quality materials (stone, ceramics) is planned. It should be equipped with adequately designed street furniture (benches, waste baskets, lanterns…) and the kind lighting that will make the space even more dynamic.

The removal of all pre-fabricated and temporary structures from the square area is mandatory and the installation of new ones is not allowed.

The underground public garage in the section of the newly formed square is to be built as a single-tier or a double-tier structure, depending on the geotechnical characteristic of the terrain, The capacity of one tier is around 450 parking spaces, and the gross developed floor area is roughly 15,000 m2. Road access to the public garage is to be enabled through car ramps from the direction of 27. marta Street and Kralja Petra I Street, and pedestrian routes are to be connected directly with the square. It is recommended to connect the garage with the passageway beneath the Department Store plaza.

In preparing the design, special attention should be paid to the distance from the neighboring structures, especially those next to the Court building, whose function and appearance must not jeopardize the visual-stylistic integrity of the facility itself.

All the entrances and exits from the garage, for both cars and pedestrians, are to be covered, but in a way that does not obstruct the view of the surrounding facilities with their look, proportions or choice of materials. New structures need to be simple in form and made of transparent, modern materials, so that they make a harmonized whole with the neighboring structures.