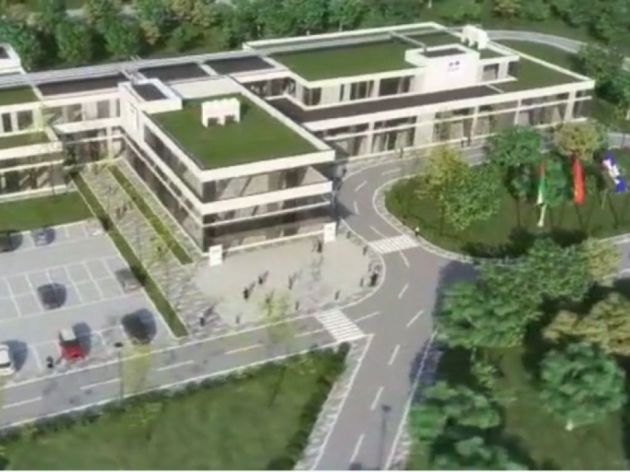 (Photo: Instagram/buducnostsrbijeav, printscreen)
The factory for the production of Chinese Sinopharm vaccines will be built in Zemun Polje, within the “Autoput” Business Zone. This is said in the decision of the Directorate for Building Land and Construction of Belgrade regarding the awarding of the contract for the preparation of the technical documentation for the equipping of the location.

Within the negotiation procedure without the opening of a public invitation for the procurement of the technical documentation for the equipping of the location for the construction of the vaccine factory within the “Autoput” Business Zone in New, Belgrade, Zemun and Surcin, the Directorate for Building Land and Construction of Belgrade awarded the job to the Road Institute of Belgrade (Institut za puteve ad Beograd).

The offer of the Road Institute, worth RSD 61.87 million without the VAT, has been selected as the most favorable among the three offers by the bidders which had been invited to negotiations.

The preparation of the technical documentation for the equipping of the location should be finished by October 25, the decision says.

According to the explanation, under the decision of the Government of Serbia of May 27, it was determined for the investor rights on behalf of the City of Belgrade for the equipping of the location for the preparation of the planned vaccine factory in the Unit1 – Block 11a within the Detailed Regulation Plan for the area of the “Autoput” Business Zone in New Belgrade, Zemun and Surcin, to be exercised by the Directorate for Building Land and Construction of the City of Belgrade.

It is added that it was recommended to the City of Belgrade to carry out, through the Directorate, the works on the utility equipping of the cadaster parcel no. 946/5 at the Cadaster Municipality of Zemun as priority works. In this location, as said, a facility is to be built, the vaccine factory, “of special importance for Serbia in fighting the Covid-19 epidemic”.

The works on the utility equipping entail the solving of the property-legal relations, the preparation of the technical documentation and the construction of access routes with the infrastructure, and they need to be realized in an urgent procedure.

This is What the Serbian Vaccine Factory Will Look Like

Companies from China and UAE to Build Turnkey Vaccine Factory in Belgrade Area – Sinopharm First to be Packed, Also to be Produced at a Later Date

Factory for Production of Chinese Vaccine to be Built in Belgrade Area – Operational from October 15?

Let us remind that the construction of a factory of Sinopharm vaccines was announced in March. Serbian President Aleksandar Vucic said at the time that the investment had been agreed in Abu Dhabi and that the factory was to be built in cooperation with the UAE and China and that the production would start as soon as October 15.

– We are looking for land close to Belgrade, toward Surcin or the Belgrade surrounding area – Vucic said at the time.

He announced that Serbia would provide the land and the infrastructure and that it would invest EUR 18 million in the capacities for the filling and packing of vaccines, for the flu, the tetanus and the coronavirus vaccines.

Lazarevac was subsequently mentioned as the potential location for the factory, and Prime Minister Ana Brnabic stated that Lazarevac was one of the five locations considered.

Serbian Agriculture Minister Branislav Nedimovic stated that the factory would be built under a “turnkey” system and that it would produce two million vaccines a month. The plan is for Sinopharm’s vaccines, as he said, to first be packed only, and then to be produced as well.