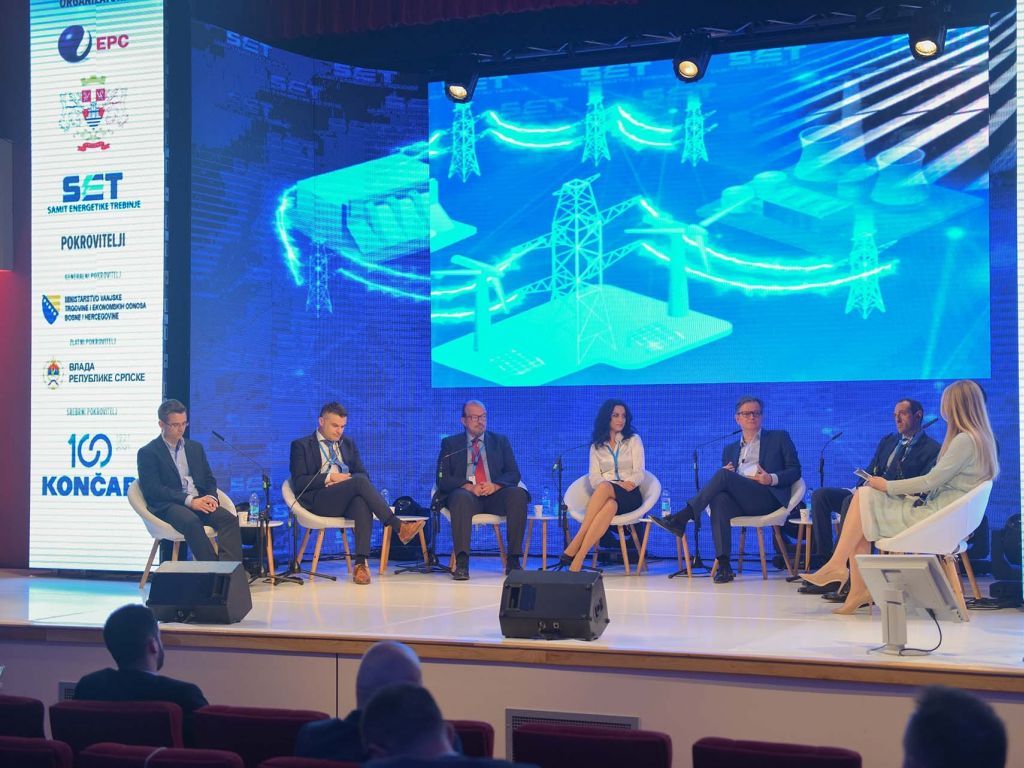 (Photo: Đorđe Bjelaković)
The sixth panel of the Trebinje Energy Summit 2021 was dedicated to the development of RES potentials and their integration into the energy system of a country.

According to the panelists, in order for the integration to be efficient, clear regulations, a developed market, a regional overview of the capacities and connecting into a network are needed, because, as the experts repeated, this issue requires a regional approach. This is especially apparent from the example of the relation between BiH and Croatia, whose experts take care of the needs and influences of the neighboring country in creating energy strategies.

The answer to the question of how ready the countries of the regions really are for an energy transition should be the barometer on which experts from BiH, Serbia and Montenegro are working now.

– This is a barometer of the readiness of the countries for an energy transition. There is the first energy transition and it is liberal, and the second one is decarbonization. Our results within the Energy Community in these past 15 years are not exactly stellar and we are now entering a double transition, the Second and the Third Packages are unfinished, and now we have to enter the decarbonization process based on the Sofia Declaration. When we saw what the Sofia Declaration entails, we had to seriously ask ourselves whether the signatory states could achieve all that. Now our experts from the region estimate every year to what extent the actors in the countries are ready to carry out this complex process, from the aspect of objectives – professor Mirza Kusljugic of the Faculty of Electrical Engineering in Tuzla, one of the most eminent experts in this field in the region, said at the opening of the panel.

Around 100 specialists should take part in the evaluation of the actors – industry, NGO sector, public and local government, and the first draft report should be ready in September.

The biggest problem in the BiH market is the inconsistency of the general policies toward the integration of RES into the system, emphasized Maria Djogic, the head of cooperation with international institutions and RES at EP HZHB.

– We sign agreements and declarations in BiH, and then we take micro steps in one direction or in the opposite direction from what was signed. So we have the obligation to decarbonize, and yet we stimulate the production of coal.

She says that, in BiH, coal is subsidized with 3 euros per hour, whereas hydro power plants are burdened by parafiscal charges, so over EUR 8 is paid per MWh in compensations for hydro-accumulation.

– In other words, those of us who produce electricity from water have to pay to produce it, whereas those who use coal are paid to produce. We therefore need to accept the changes that await us more efficiently and quickly and across sectors. BiH now has a system of incentives through feed-in tariffs, but the regulations are being changed and by the end of the year we should switch to premiums and auctions. I am not optimistic that the new system will take root fast or properly. We therefore need to include power companies and operators, in order to get a good law – Djogic emphasized.

Neven Dujic of the Faculty of Mechanical Engineering in Zagreb says that it is usual for BiH to export, to Croatia, the electricity it gets from coal, but when the share of wind energy rises from 25% to 40% in the European energy system, the direction changes.

– Europe is moving fast toward RES and should establish the Carbon Border Adjustment Mechanism by 2023, whereby it will tax the production of electricity from coal, the electricity that would be exported to the EU. The idea used to be to export electricity from hydro-potentials, and for BiH to use electricity from coal in its own territory. However, even if the EU mechanism didn’t exist, what Croatia builds in the domain of RES would cause the coal-based thermal power plants in BiH to shut down. Coal in BiH cannot survive beyond 2030 and I cannot understand how anyone can build a new coal-based power plant, knowing that it can only be connected to the network in five years, which from the start is a pure loss.

Regarding this aspect of the energy systems of BiH and the region, professor Mirza Kusljugic says that the professionals need to take a look at the real sources of balancing and variability in BiH, also within the triangle with Montenegro and Serbia, in order to see what the sources of flexibility are and to create an efficient system.

– The challenges are big, and there’s a lot of undecidedness around development plans, with various studies contributing to the confusion. The IRENA study of balancing says “little gas, more biomass power plants”, whereas the study of the Energy Community points to gas as the way to achieve balance. Do you think that it’s simple to sell the closing of thermal power plants in BiH so that we would import gas and produce electricity? If we don’t work on this on the regional level, it will be very expensive, maybe even impossible – Kusljugic said.

Ninoslav Holjevac of the Faculty of Electrical Engineering and Computing in Zagreb says that each consideration of the energy system in Croatia also takes into account the system BiH, otherwise Croatia can’t integrate new capacities in the RES sector.

– Each development on the Croatian side will also help the inclusion of RES in BiH, so the solutions need to be mutual. So far, we’ve integrated 1,000 MW and there have been no problems. Our proximity inevitably makes us cooperate, but politics often hamper us. For example, there’s the issue of the operations of hydro power plants Dubrovnik and Trebinje. One generator is in Trebinje, the other in Dubrovnik. I believe that they would need to be integrated in order to create an operating system – Holjevac says.

When it comes to the state of the electrical energy system in Croatia, Holjevac points out that there needs to be harmony in distribution and transmission. Croatia has plenty of local projects, solar power plants in micro locations, and if everything produced would be spent locally, the transmission would serve as a reserve.

– HOPS and ODS need to cooperate well when it comes to the state of the network, transmission and distribution. There’s plenty of room for progress, because what’s connected to the network also affects the network and nothing should be separated.

Financing and allocation of risk

As the topic of this panel was the integration of RES in the energy system, the question of financing the construction of new power plants and the role of international institutions in that process was inevitable.

That is why Francesco Corbo, the regional head for energy for Southeast Europe at the EBRD, said that it was necessary to have a good framework, because that provides security to the investor.

– Auctions are a good element that offers to investors the kind of certainty they are looking for and that motivates them to take part in tenders. Investors are well familiar with the market of a certain country, they follow the development of projects and the activities of the state when it comes to the adoption of laws. Auctions are also good for reducing the risks related to the credit rating. What’s important for an investor is to have a clear situation and to know how to distribute the risk. When they are able to do that, they also know which institution to address – Corbo pointed out. 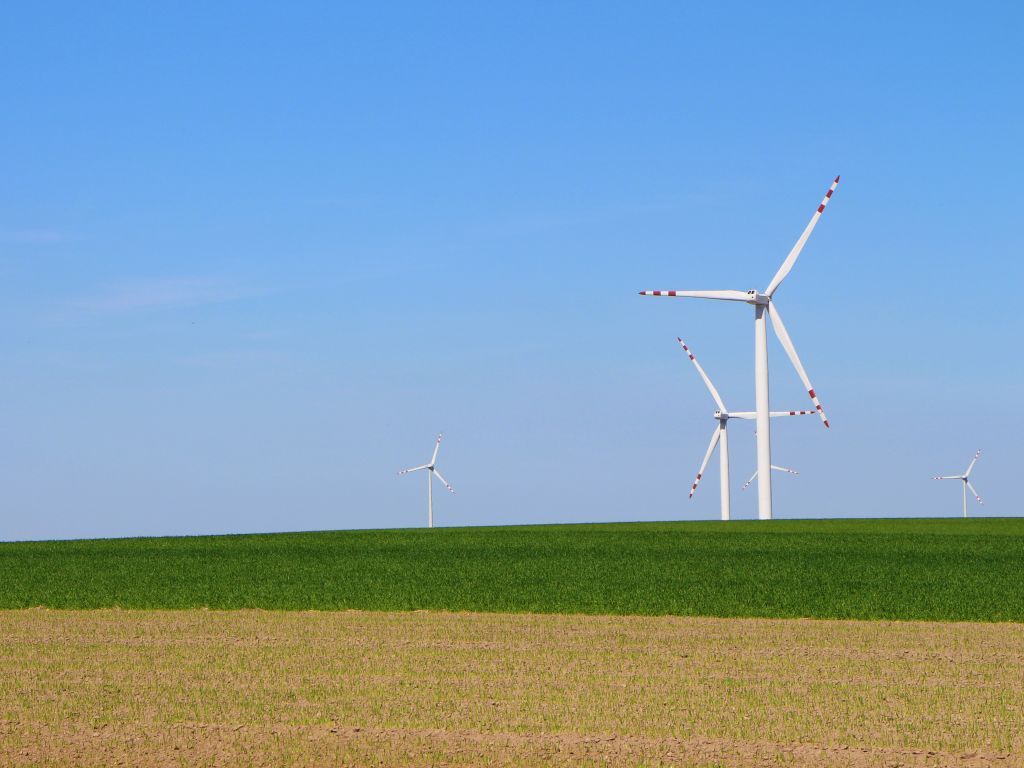 According to him, Serbia has more and more inquests for investments in RES, because it has adopted important laws in this field, and bylaws on auctions will be prepared soon.

– We would like to see the private sector, in addition to the power companies, be more active in investing in this field, because private companies have shown to be very experienced and capable of doing a lot within a reasonable deadline.

Corbo believes that thermal power plants can’t just be shut down like that to have everything decarbonized by 2050.

– That is why power companies and the private sector need to be competitive and we must find the way to diversify the portfolio as a bank and to gradually see what to do with coal. We don’t want to undermine the power companies. On the contrary, we want to strengthen them, so that they can invest in RES on their own or within public-private partnerships.

Petar Mitrovic of Karanovic & Partners Law Office says that Serbia has done a great thing in creating the regulations and that plenty of bylaws are expected. This, he says, will further boost the RES sector and accelerate the procedures.

– There are currently requests for the installation of around 400 MW in solar facilities in Serbia, which is a clear indicator that the state has created a good terrain for investments. When it comes to solar energy, we need to see what to do with the infertile state land, which would be suitable for such power plants. In the domain of regulations, that is the next step that needs to be planned and to stop providing subsidies for coal at some point. Of course, this can’t happen overnight, but we need to start the process, not today, but yesterday – Mitrovic concluded.

The integration of RES must not be a national project, emphasized Marko Jankovic, the director of the market directorate at Elektromreza Srbije, not because of the politics, but because it’s not feasible.

– The electric energy market in a country has to have a good foundation. An organized electric energy market regulates not just the issue of wholesale, but also the integration of RES, so that they wouldn’t be left on their own, bilaterally signing certain contracts on which their operations depend. Regardless of whether it’s the sale of electricity or balancing, they then depend on the good will of an individual participant. If we have an organized market as a platform where supply and demand are generated, that provides security for investors when it comes to various aspects of planning an investment – Jankovic said.

The electricity market, he says, doesn’t just need to be well organized, but liquid as well, and that liquidity is not achieved on a national level, because that is very hard to achieve.

– True liquidity is achieved through market coupling, that is, by merging markets. A liquid intraday market is important for the integration of RES, not just for wholesale and balance – Jankovic concluded.

The Trebinje Energy Summit SET 2021 was organized by Elektroprivreda RS and the SET company on May 20-21, under the aegis of the Ministry of Foreign Trade and Economic Relations of BiH, the Government of the Republic of Srpska and the Koncar company, with the general sponsorship of Elnos Group and the support of Infinity Group and Dwelt.

The eKapija portal is the media sponsor of the 2021 Trebinje Energy Summit.