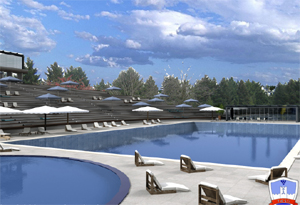 In Smederevo, on 20th of July, will be opened the first Olympic swimming pool in the city, one of the most modern in Serbia. The goal of this city on the Danube, which has seven first league players in various sports, is to become one of the recreational centers in Serbia.

- Near the pool there are two bubble halls and a gym, which was built for the Universiade. The hall had already held a number of competitions. Theis hall should get some more contents, such as shooting room, bowling alley, which would enable finalization of its construction. In two years time, we expect this complex to become a significant Serbian sports centre - said in an interview with "eKapija", Predrag Umicevic, the mayor of Smederevo.

He announced the visit of the Serbia Water polo team at the official opening of the pool and the visit of the leading people from the Water Polo Association.The Pool complex consists of the Olympic swimming pool and two smaller pools, and it will be able to host hundreds of bathers, while the match from the stands will be able to observe 7000 spectators. Olympic pool meets all FIDA standards and is equipped with technology that will meet the stringent requirements of international swimming events. 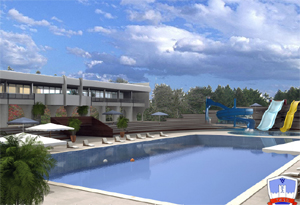 - We expect that Smederevo, which has representatives in competitions in many sports, will become a new swimming center. First, we will organize training for non swimmers and hopefully the Water polo club will soon be opened - said Umicevic.

Smederevo has invested in building of this pool 105 million dinars, which was provided through the loans. Project office "Modular" from Belgrade was in charge for the project design, while construction was entrusted to the companies VIG from Smederevo and PZP Pozarevac.

Smederevo Mayor announced that it was in plan to build an aqua park in one part of the promenade by the Danube.
- City of Smederevo is in negotiations with "Želvoz" about buying their location by the Danube which has a smaller pool and a tennis courts. At this location we will build an aqua park. The location has a beautiful view, and there are also hot water sources. When we come into the possession of this property, we will do preliminary design and get further into realization of this project. It is not in plan for this year - said the mayor of Smederevo.