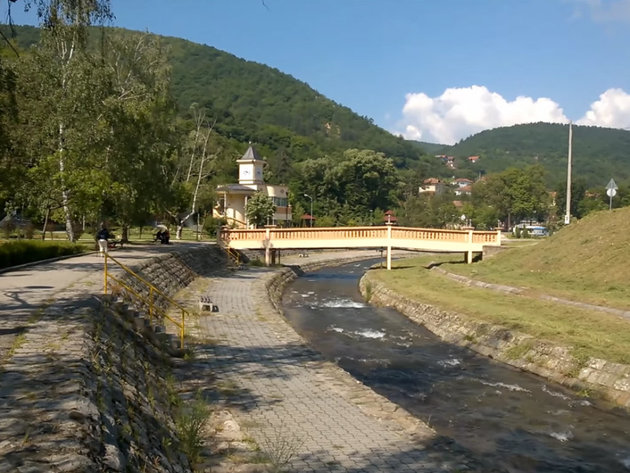 Vranjska Banja (Photo: YouTube/screenshot)
The company Millennium Resorts and the American hotel company Marriott International yesterday signed an agreement on the construction of a hotel complex in Vranjska Banja.

On behalf of the two companies, the agreement on cooperation was signed by Silvija Lovreta, the Director for South Eastern Europe for International Hotel Development at Marriott International, and Ivan Bosnjak, the Director of Millennium Resorts, says the press release.

The director of the company Millennium Team, Stojan Vujko, said that Millennium would invest EUR 90 million in the project and that 350 jobs would be created, Tanjug reported.

He said that the signing of the agreement marked the beginning of cooperation with one of the leading American companies and that it was an important step in the development of economic relations of Serbia and the USA.

He emphasized that the agreement was a big business step for Millennium Team, which will show the ability and the strength of the company in the hotel sector as well, since it had been known as a construction company up till then.

He said that the project of the construction of the hotel complex in Vranjska Banja was important for the development of the area as well.

– We are sure that, after this project, Serbia will be recognized as a top spa tourism destination – said Vujko.

The director of Millennium Resorts, Ivan Bosnjak, said that the complex would have two hotels from the Marriott Chain, as well as the medical center Sofka, and that the plan included spa apartments, villas and bungalows.

– Vranjska Banja used to be a very important tourist destination in the field of spa and health tourism, and now it is ruined, so there’s practically no tourism. This project will give new life and energy, we will create a new tourist destination – Bosnjak said.

He added that the project could not be realized without the understanding of the state organs and the local self-government.

– We intend to develop a wide portfolio of our brands in the country. We believe that Serbia has strong potential for the development of wellness and spa tourism, with Vranjska Banja being one of the rare spas in Europe with a unique capacity of hyperthermal water and we want to be one of the first global brands to step into this growing segment of demand. Westin, as a brand, is globally positioned in its segment, whereas Autograph Collection is a collection of unique hotels worldwide, so we believe that those two brands would contribute to the overall development and positioning of Vranjska Banja as a destination of a high international quality standard – the press release says.

He added that investors trusted the investment environment in Serbia, Tanjug reported.

The signing of the agreement was attended by the prime minister of Serbia, Ana Brnabic, and the US ambassador to Serbia, Anthony Godfrey.

Brnabic emphasized that it was Marriott’s biggest project in the Balkans, as well as the largest investment in Serbian tourism at the moment.

Godfrey said that one of the most beautiful hotel complexes in that part of Europe would be built in Vranjska Banja.

The hotel complex in Vranjska Banja will be built in four phases, the last one of which should be completed in 2026 and will have features and the level of service the kinds of which do not exist in this part of Europe, said Nikola Avram, the director of the company Alpha Hotel Management, which will manage the complex.

Following the signing of the agreement on the investment in this tourist-spa complex, worth EUR 90 million, he explained that, in the next 20 years, Marriott will give Millennium the franchise so that all the features and the service quality would meet the high standards of the world’s biggest hotel concern.

– The first phase of the construction should be over by April or May 2023 and entails Hotel Westin Vranjska Banja, which will be the best hotel in Serbia, and next to it, the Sofka Medical Center will be developed, a whole new product in the Serbian market, modeled after those in Austria, Germany and north Italy – said Avram.

He added that, in the second phase, the Kralj Petar Prvi Autograph Collection with five stars will also be built, with entirely new services the kind of which are not available in Serbia outside Belgrade.

Avram explained that, in the third phase of the construction, spa apartments on 10,000 m2 will be built, and the fourth phase entails the construction of spa bungalows, unique in this part of Europe, by 2026.

– We have already started the preparatory works for the construction of Hotel Westin, which will have more than 40,000 m2, a total of 190 rooms and apartments, of which 20 spa apartments from which you can access a private pool directly – Avram explained.

The hotel will feature a congress center on 1,500 m2, one of the biggest ones in this part of Europe.

– The spa center of Hotel Westin will have a total area of 4,000 m2 on two levels and feature Serbia’s only lady spa, that is, a special spa for ladies only. We will have four restaurants, five bars, a children’s club on 150 m2 and a fitness center on 300 m2, which will be done in cooperation with Technogym and be one of the best and most modern ones in this part of Europe – Avram said.

He added that the smallest rooms of Hotel Westin will have 40 m2, whereas the largest ones will be the two presidential apartments, which will have 275 m2 each.

– The second part of the first phase is the Sofka Medical Center. It will be located in a building from 1935, have 6,500 m2 and offer a well-being management, help management, immune management, with doctors, the only concept which has so far not been present in Serbia and where we expect the most local and regional guests – Avram said.

He added that the spa medical center would feature a tea restaurant with teas from Japan, China and the whole Europe.

The second phase of the construction entails the construction of Hotel Kralj Petar Prvi Autograph Collection, which will have two parts, an old one in a building from 1888 and a new extension.

– There will be 100 rooms and apartments there on a total of 6,000 m2, of which 2,000 m2 will be a spa center, and it will be physically connected with Hotel Westin and Sofka. Westin will be adapted to family vacationing, and Kralj Petar Prvi to older guests – Avram noted.

The third phase of the construction of the Vranjska Banja complex entails spa apartments, which will serve to increase the number of guests in this spa-tourist center, because, according to the investment plan, there will be spa content on over 10,000 m2.

– The most important part of Vranjska Banja are spa bungalows, which are to be built in the final phase. They will be located in a forest and have an area of 50 to 70 m2, and there will be no other guests within 45 meters of each of them, because we want to show how people used to live in harmony with the nature – Avram said.

He added that the bungalows, located in a forest, at a higher altitude, would be reachable by electric vehicles.