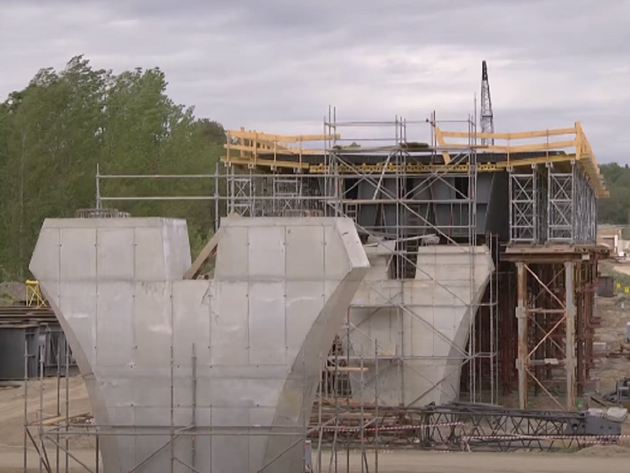 Viaduct under construction (Photo: YouTube/screenshot)
The Russian company RZD International has announced that it has completed the construction of the longest rail viaduct in Serbia on the navigable section of the Danube and the first tunnel without a canopy, Cortanovci, more than half a year before the planned deadlines.

As emphasized, these structures will become a part of the first high-speed railway Stara Pazova-Novi Sad, on the railway from Belgrade to Budapest.

In April, both facilities successfully passed the inspection of the Ministry of Construction, Transport and Infrastructure for harmonization with the project design.

Before the facilities are put into operation, which is planned for the end of 2021, works on the installation of the contact network, the upper track assembly, and tests are to be carried out in the autumn, before the commissioning.

The works on the construction of the viaduct, they remind, began on November 1, 2017, and were completed six months before the planned deadlines. Its length reaches three kilometers and certain pylons are 26 meters tall, comparable to an eight-story building.

The viaduct is located at the exit from the Cortanovci tunnel ahead of Sremski Karlovci and stretches along the navigable section of the Danube. A part of the structure is located on an incline, which is why, in order to secure the structure during its construction and exploitation, 20 anti-landslide protective structures were built.

The Cortanovci tunnel consists of two parallel tubes of a total length of 2.2 kilometers. The works on its construction were carried out without a break from September 2017 and were completed seven months before the agreed deadlines.

The actual construction of the tunnel took three years. The boring was carried out simultaneously at the four points of the two tubes at the north and the south portals, and the laying down of the upper assembly of the tracks is currently being carried out in the tunnel.

The supervisory organs, accredited labs and independent consultants constantly controlled the quality during the works on many levels, and the deadline for the safe use of the facilities, set by the project, as emphasized, will be at least 100 years.

RZD International says that they are continuing the works on the construction and reconstruction of the railway on the section Stara Pazova-Novi Sad, on the Belgrade-Budapest railway, Pan-European Corridor H.