New Belgrade Airport to be Built Near Dobanovci! – Novi Sad to Get a Whole New Airport Too 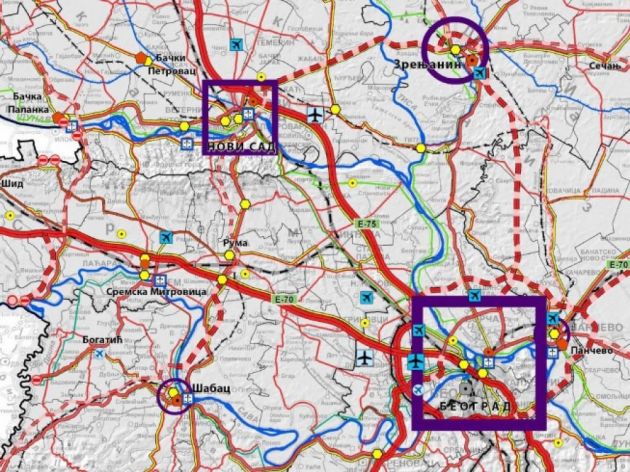 Map from Draft Spatial Plan with marked locations of two new airports (Photo: Print screen / Referalna karta 3a / Prostorni plan RS)
According to the Spatial Plan of Serbia from 2021 to 2035, published by the Ministry of Construction, Transport and Infrastructure, the country will get two new international airports – one near Dobanovci, and the other near Novi Sad!

As said, due to the spatial limitations in the current location of the airport in Belgrade, a new location is planned, 10 km west to the Nikola Tesla Airport, 24 km away from Belgrade, in close proximity to the E70 highway on the Grmovac-Dobanovci-Dec stretch.

The complex should have an area of around 1,100 ha and feature three runways, two passenger terminals, two cargo terminals, a logistics and free customs zone, modern navigation equipment and a light signalization system, as well as the 4F airport code.

When it comes to Novi Sad, construction is planned in the location around 15 km southeast to the biggest city in Serbia’s north, close to the A1 highway, on the Kovilj-Sajkas-Budisava stretch, with an area of around 300 ha and the 4E airport code.

The close proximity to the railway is a perspective for the development of cargo, multimodal transport, the documentation reads.

The existing Nikola Tesla Airport complex in Surcin will get new traffic and infrastructure facilities, and the plan is to also reconstruct and extend the existing facilities. The documentation also talks about spatial route surveying and technical defining of the connection with the rail and road routes and the public transport system, the forming of a cargo complex and an upgrade of the existing airport features and the construction of new ones for the purpose of capacity increase, in line with the expected growth of the number of passengers and the scope of cargo transport.

At the Nis Constantine the Great Airport, activities of upgrading the services through the construction of new infrastructure and the reconstruction of the existing one are planned, so that the airport would get the status of an intermodal center.

When it comes to the Morava Airport in Kraljevo, the plan is to build new infrastructure and reconstruct the existing one, in order to carry out an adequate positioning of the purposes, features and facilities and the manner of connecting the airport to the planned network of highways (Morava Corridor) and other activities.

The airport in Pristina is looking at the construction of new infrastructure and the reconstruction of the existing one. The plan is also to upgrade the regional connections by establishing the necessary volume of traffic on the Belgrade-Pristina route.

The Draft Spatial Plan of Serbia until 2035 is up for public review from Monday.