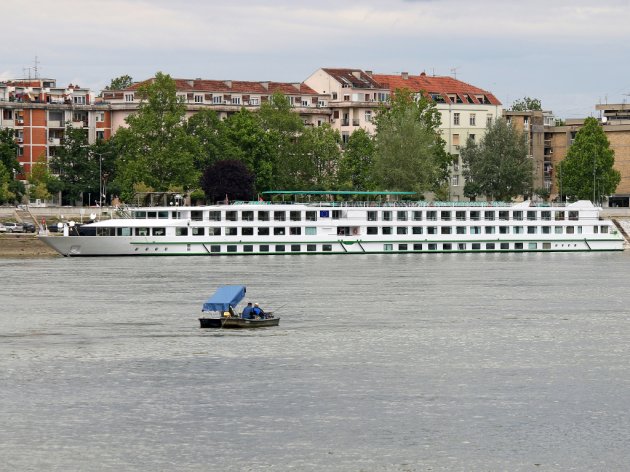 (Photo: shutterstock.com/649128304)
The Novi Sad authorities are negotiating with the European Investment Bank (EIB) about securing a loan for the financing of the construction of a pedestrian-cycling bridge on the columns of the former Franz Joseph Railway Bridge, the 021.rs portal learns.

Mayor Milos Vucevic says for 021.rs that he is working with the state and the provincial organs on having a bridge built, with participation of Chinese partners, as an extension of Evrope Blvd toward Sremska Kamenica, as well as a bridge near the War Island, which will be a part of the Fruska Gora Corridor.

In the meantime, Vucevic says, the city is negotiating with the EIB regarding the financing of a pedestrian-cycling bridge on the Danube, which would connect the wharf with the tunnel beneath the Petrovaradin Fortress.

– We are negotiating with the EIB about a pedestrian-cycling bridge in the location of the former Franz Joseph Bridge. We haven’t put it aside at all because we are building these two bridges with the Chinese, one as a part of the Fruska Gora Corridor, and the other as a part of the bypass route of Evrope Blvd. We are well into our talks with the EIB about this bridge – Vucevic says.

He is not disclosing the details regarding how much money the construction would require. Unofficial estimates are that Novi Sad would need a credit of 10 to 15 million euros, which mostly depends on the costs of the access routes and other adjacent costs.

This is a slightly lower price compared to an earlier project for a bridge. Namely, around ten years ago, the estimate for a much larger bridge, which was supposed to have road traffic lanes and an additional tunnel beneath the fortress, was 30 to 40 million euros.

The Department for Building Land and Investments also confirms for 021.rs that there are negotiations about the financing of the construction of this bridge.

– Negotiations with the EIB about the potential realization of the bridge construction project, as only one of the segments of the entire project, which contains several elements and entails a range of investment activities on this stretch, are in progress – the department says.

In 2019, this department carried out an architectural contest. They also say for 021.rs that, this year, technical documentation is being prepared, but the tender has not yet opened, because the urban plan for the bridge first needs to be adopted.

A total of RSD 19,020,833.33 for the preparation of the technical documentation for the pedestrian-cycling bridge, as well as RSD 1,902,500 for the control of this documentation, is planned within the city budget.

The first permanent bridge between Novi Sad and Petrovaradin, a railway bridge, was built in 1883. It was demolished by the armed forces of the Kingdom of Yugoslavia in April 1941 in order to slow down the advancement of the occupying forces.

The occupying forces reconstructed the bridge in 1942, but it was demolished again in 1944, right before the liberation of the city. Since WW2, the potential construction of a new bridge has been mentioned on several occasions. The only concrete activity, however, was the removal of a column in the 1960s, in order to facilitate the passage of ships. Regardless of the several initiated projects, no construction activities have taken place so far.
Companies:
Grad Novi Sad
Evropska investiciona banka EIB
Tags:
City of Novi Sad
European Investment Bank
EIB
construction of a pedestrian cycling bridge
Franz Joseph Bridge
Evrope Blvd
bridge near the War Island
Milos Vucevic
bridge beneath the Petrovaradin Fortress
pedestrian cycling bridge on the Danube
Share: