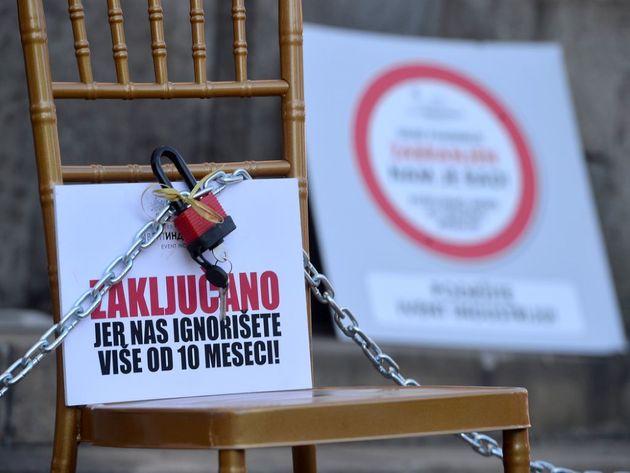 (Photo: Udruženje Ivent industrija Srbije)
Since March 15, 2020, as a consequence of state measures adopted to suppress the coronavirus pandemic, the event industry has not been working or making income and is the only industry currently banned from operating.

Representatives of the Event Industry Association of Serbia protested this Thursday in front of the Government of Serbia building in order to point to the problem in this sector, but also to invite the authorities to negotiate and find a way to have the event sector start operating in the spring.

Nikola Dedic says for our portal, on behalf of this association, that the association was founded last year after weddings and other events were banned.

He explains that the association has more than 130 companies – event centers, organizers of various events, concerts, weddings, festivals. Among the members are also decorators, florists, photographers, cameramen, limo services, pyrotechnics operators, technical event producers, audio and video equipment rental services and many others, and the association aims to protect the interests of these professions.

As Dedic points out for our portal, the main request they have is to let them work, but also to allow them to get other forms of help, such as quick access to liquidity loans, postponement of employee tax and contribution payment and payment of other business-related charges.

– To us, it is of crucial importance to be allowed to work, of course, complying with certain measures by which we would protect the staff and the guests. It would also mean a lot to us if rents were reduced and if there was a reprogramming of utility and other fees – Dedic says.

The association, he says, has also carried out a survey which has shown that around 20,000 people are affected by these measures, due to not being able to work.

– And this doesn’t pertain to restaurants, cafes and clubs. Although they keep putting us in the same category as them, we are event organizers, whatever the event is – Dedic explains.

He points out that, despite the numerous attempts to contact representatives of the authorities, the state has not made a concrete response, expect to say that it has already provided linear aid.

– There is no institution that is related to us that has not been sent an average of three mails, memos, but there has not been a single response. We have also contacted foreign embassies asking them to tell us how the issue of operations of the event industry in their countries has been solved, but there have been no responses on that front either – Dedic says.

He notes that the association was told that the state had provided linear help to all employees, but points out that, in their case, it is in fact not of great help.

– By taking help from the state, we were forced to keep the companies open, which was in fact counterproductive, because you needed to pay employee taxes and contributions somehow. I’m not saying the state intended to harm us, but for this sector, that is not the solution – Dedic says.

According to the survey that the association carried out, around 25,000 weddings are organized in Serbia each year. This generates around EUR 300 million a year, according to our interviewee. He notes that the ban caused the number to drop significantly in 2020.

– In 2020, only 5% of the events were realized. There was a loosening of restrictions in the summer, so some events did take place, but there was nothing before or after that – Dedic points out.

However, if the industry was allowed to operate, the number of weddings in 2021 would nearly double, our interviewee emphasizes.

– The estimate is that, due to cancellations and delays in 2020, there will be close to 40,000 weddings in 2021, whereby we would realize an amount of around half a billion euros. This chain includes food and drink manufacturers, distributors, musicians, renters of wedding halls etc. Not to mention corporate celebrations, concerts, festivals, birthdays, playrooms for children… the gross income from those events is even higher – Dedic says.

When asked how the organization of such events might function under the current conditions, Dedic says that the association has devised certain measures.

– Our idea was to propose a full set of measures that would be implemented if we were allowed to work. Some of them were a restriction of the number of people per square meter, for example, 9 m2 per guest, a set distance between the tables, the testing of the staff and not allowing kissing or giving congratulations through physical contact – Dedic explains.

He reminds that, in the summer, when the restrictions were loosened, clubs were allowed to work, which, he says, is a much bigger health risk than an event such as a wedding.

– Clubs were allowed to work this summer, which led to having plenty of people who in fact don’t know each other in a single place. In weddings, this can be controlled. As organizers of events, in this case weddings, you are familiar with each guest on a name basis. There’s a big difference in organizing and attending weddings and going to a club – Dedic notes.

He also says that the psychological factor is also important in this business and that many have decided to change their profession due to this ban.

– When you can’t work, you become apathetic, dissatisfied… That is a bad thing and it causes people to lose enthusiasm, which is why many are now changing their profession. We are creative people and what we do is a kind of art. You are serving somebody. You need to analyze how the client’s wishes fit into the budget and propose a service accordingly. Energy is the crucial factor here.

– I hope that the state will hear what we have to say and that we will be able to work from this spring – Dedic says for eKapija.