2020 RETROSPECTIVE: Investments in SPORT Most Interesting to eKapija Users 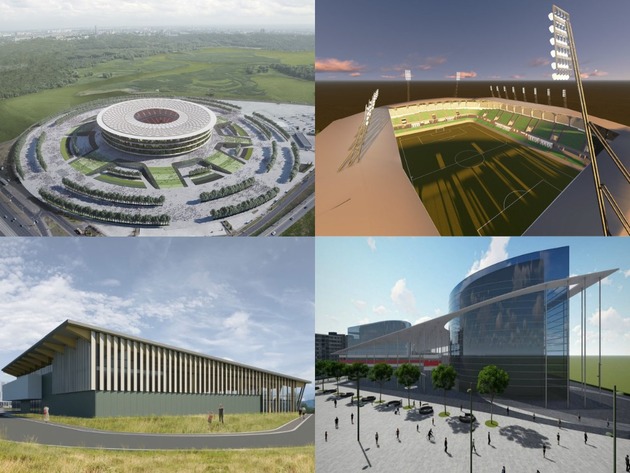 National stadium, Loznica, Kraljevo, Karadjordje Novi Sad (Photo: Ministarstvo finansija, FK Vojvodina)
Serbia can be proud of a lot of things, sports included, that is, the successes of our athletes. As the famous quote goes, football is the most important of the least important things in life, and this could explain why so many investments in stadiums were either launched or announced last year.

Although we pay more attention to clubs than our national team, Serbia intends to enable fans of this sport enjoy themselves whether they are watching games from Belgrade or Novi Pazar.

There were also investments in pools, and if we compare the successes of our water polo team to those of our football players, maybe the focus should be placed here instead.

We are highlighting the 10 stories that attracted the most attention when it comes to investments in sports infrastructure.

The construction of the national football stadium was announced in August 2020 for this year. It was said at the time that the stadium would be located close to the Milos Veliki highway and the Belgrade-Surcin road. It was announced earlier that EUR 250 million had been set aside for this purpose. The stadium’s design was also announced, and the project was widely criticized as well.

The construction of a new, UEFA-ready, stadium in Loznica was approved in October 2020. The estimated value of the works is RSD 2.56 billion without the VAT. However, in December, the public procurement procedure pertaining to the construction of the Lagator stadium in Loznica was stopped, as no acceptable bid had been sent. In late December, the Office for Public Investment Management adopted the decision to award the contract to the group that was the sole bidder. The value of the agreement is RSD 3 billion without the VAT (RSD 3.6 billion with the VAT).

The continuation of the construction of the indoor city pool in the Kraljevo suburban area of Ribnica was announced in early 2020. As the mayor of Kraljevo announced at the time, through a budget rebalance, the city will set aside RSD 120 million for the investment.

The pool (25 m x 33 m) is to be built in the location where the construction activities have already started, next to the new sports hall. Another small pool, for teaching children to swim, will be built within the complex. After a re-evaluation, the initial value of the investment was revised down from RSD 980 million to RSD 840 million. The state is to provide RSD 600 million, whereas the City of Kraljevo will contribute RSD 240 million.

The construction of the Karadjordje Stadium is planned in line with the requests and rules of UEFA and compliance with the general recommendations of FIFA. The projected capacity of the stadium is in the range of 16,000 to 17,500 spectators.

The construction of new stadium in Kragujevac, in the location of the current one, popularly known as Cika Daca, was announced in June 2020. It was announced at the time that the investment was worth EUR 40 million.

The new complex is split into two functional wholes, a stadium with the ticket booths, as a primary-purpose facility in said area, and a sports center consisting of three auxiliary fields with stands, three canopied balloon courts and an administrative and commercial facility.

The stadium should take up around 29,700 m2 and have two underground levels and three aboveground levels, and the capacity is around 19,950 spectators. 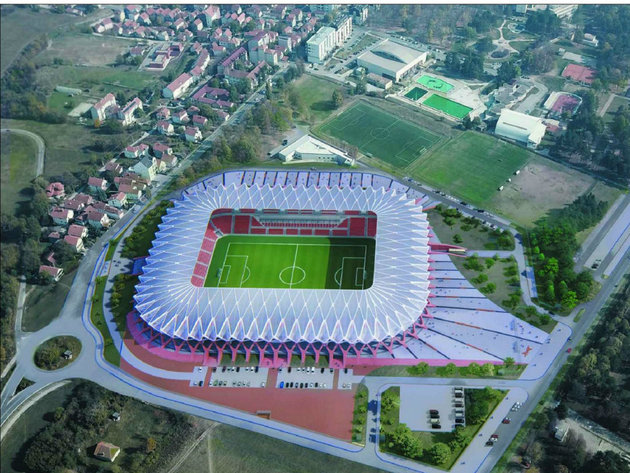 Indoor pools are to be built in Priboj as part of the “Vuk Karadzic” Elementary School. The urban project envisages the construction of two pools, a larger, semi-Olympic one (25 m x 12.5 m) and a smaller one (8 m x 12.5 m). The swimming pool will also be able to accommodate tournaments, so the construction of stands and other features is planned as well.

The Office for Public Investment Management picked the contractors for the designing and construction of stadiums in Leskovac and Zajecar in mid-December 2020. The total value of the stadiums will exceed RSD 5.8 billion. The job of the construction of the Dubocica stadium in Leskovac and the Kraljevica stadium in Zajecar has been entrusted to groups of bidders. The value of the first contract is RSD 2,465,932,800, whereas the second one is worth RSD 3,379,200,000.

According to the planning documentation prepared by the PE Zavod za urbanizam Novi Pazar and commissioned by the City of Novi Pazar, the construction of a 4th-category UEFA stadium, for a minimum of 8,000 spectators, with all the necessary accompanying features defined by UEFA rules, is planned on an area of roughly 57 hectares.

– We expect the procedure of the preparation of the project documentation and the obtaining of the building permit to be completed in mid-2021, when the beginning of the construction could be considered as well – Suat Ljajic, the director of the PE Zavod za urbanizam Novi Pazar, said for eKapija and added:

– We have opened the possibility of having a hotel complex built on the rest of the parcel, next to the woods, which is what one such complex needs, along with adequate traffic connections.

The city stadium in Sombor should get numerous additional features, such as new sports courts and even a hotel. This can be seen from the Detailed Regulation Plan that the City of Sombor put up for public view in May 2020.

Within the stadium facility itself, the plan is to develop and build new stands and reconstruct the existing one, as well as to build new courts. The construction of courts for futsal, handball, basketball, volleyball and beach volleyball, the expansion of the racing track, the expansion of the east stand and the construction of stands on the west side, as well as stands next to the auxiliary court, are planned as well.

Also, the plan envisages the construction of sports tourism facilities – a hotel for the accommodation of athletes and a parking lot next to it, pedestrian lanes and park greenery.

A model of the future design of the Sports and Business Center Vojvodina , following its full reconstruction, was presented in June 2020. The aim is to fully replace the roof, the façade, the stairwells and to repair all the halls, locker rooms, bathrooms and toilets.

– The reconstruction of the facility of over 80,000 m2 is the largest such endeavor in the region – the dean of the Faculty of Technical Sciences and the leader of the design team, Dr Rade Doroslovacki, said at the time. 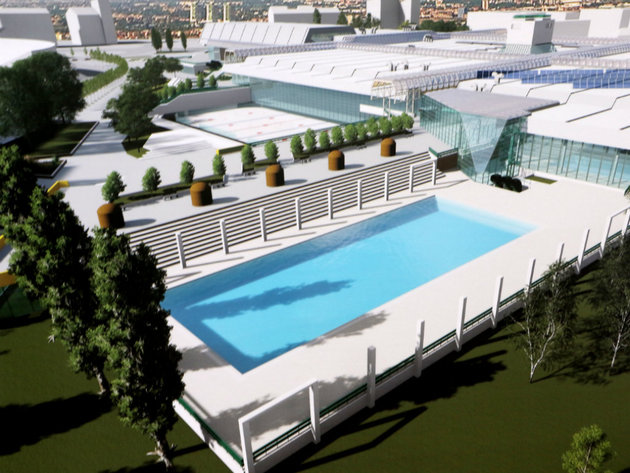 We have presented the ten investments that drew the most attention from our readers when it comes to sports. Make sure to take a look at the full list HERE.