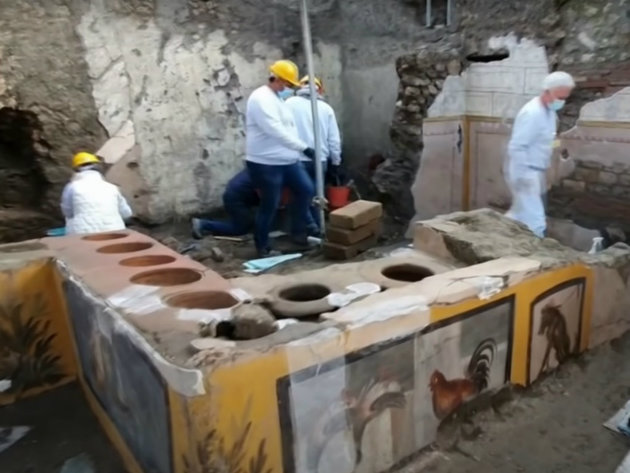 (Photo: YouTube/screenshot)
Remains of a fast food restaurant have been discovered at Pompeii, one of the best preserved antiquity sites in the world. In the city fully covered in ash during the Vesuvius eruption in 79 B.C, around 80 fast food restaurants have been discovered so far. They supplied the citizens of Pompeii with various delicacies, but this thermopolium, as these ready-to-eat places were known to ancient Romans, is the best preserved of all and is in fact the only such restaurants to remain nearly undamaged after 2,000 years.

It was detected in a location which used to feature a beautiful little square with a fountain two millennia ago, that is, a location that was likely to attract a large number of passers-by.

Pots with food remains were found behind the counter, and the variety of the substances found indicates that the ordinary citizens of Pompeii (as the elites did not eat at such places) had a pretty diverse menu of street food to choose from. There are remains of goat meat, pork, fish, snails, duck meat, as well as ground fava beans, which were occasionally added to wine in the ancient times to dilute it.

Among the curiosities is the image of a dog on a leash, and the experts are assuming for now that the image served as a warning, much like what can be seen worldwide today, for dog owners to keep their pets on a leash while waiting for the food to be served.
Tags:
Pompeii
antiquity site
remains of a fast food restaurant
fast food restaurant
thermopolium
Share: