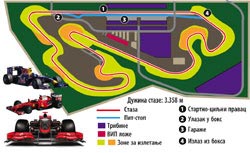 Stara Pazova's Mayor Goran Jović and businessman Zoran Stefanović from Stefan GP signed the precontract yesterday (April 22, 2010) for construction of a Formula 1 track in the location that will be allotted by this municipality. The plan is that the track and accompanying facilities be built at the surface of 120 ha from both domestic and foreign investments.

The signatories promise that the first European and regional contests of car and motorcycle racers may be held already in 2011, while Formula 1 races are expected to take place in five years "if the project is backed by the state".

- The municipality of Stara Pazova has given real parameters for such investment - Zoran Stefanović, Stefan GP's owner who tried to enter Formula 1 this year and the man who is going to invest, as he claims, 20m EUR in this project, confirmed at the press conference on Thursday.

- Our aim is that the track with all accompanying facilities be built in accordance with the F1 standards.

According to the project elaborated by architect Tatjana Tintor, the track is intended for medium-speed and high-speed driving and it is 3,538 meters long. The track is 12 meters wide and includes many different bends. Construction of all accompanying facilities for keeping equipment and accommodating contestants is in the pipeline, as well as all the things that make up one such complex.

Three locations are offered for construction, while the most probable of them is the one next to Stara Pazova - Golubinci road.

The partners announced that the construction might start "any day now", while the deadline for completion of the track itself would be two years.

- Many people were skeptic when we announced construction of the national House of Football, but it is now close to end. We have made the first and the most important step - says Goran Jović who believes this will be another successful investment.