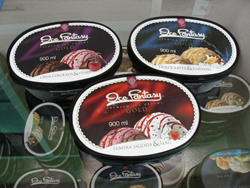 Domestic Ice Cream Factory, in which EUR 2m were invested, was opened yesterday (April 21, 2010) in Nova Pazova. The ice cream lovers can choose between 13 products named Ice Fantasy, which can be bought in family pack in stores around Serbia, as well as in the markets of Russia, Montenegro, Bosnia and Herzegovina, Macedonia, Albania, and soon in Bahrein.

Ice Cream Factory uses an Italian production line, one of the most modern lines in Europe, and it will be producing 300,000 liters of products per month. That factory at 700 square meters, which has 37 employees, was built on 2 hectares of land in Nova Pazova's industrial zone.

- I came to the idea of starting ice cream production in Serbia because I have not found an ice cream of premium quality in this part of Europe – Radosav Komadinić, CEO of Ice Cream Factory, said at the beginning of the interview for eKapija.

Ice Cream Factory formed the ice cream craft production unit in 2007. Since it did not take long for the ice creams from that factory to reach consumers, the need for bigger production emerged. 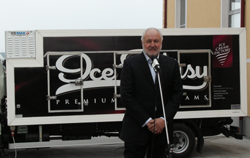 - We decided to start larger production of ice cream in family pack and make it available to wide circle of consumers. The price of our ice cream is 8-15% lower although its quality is higher – Komadinić points out and adds that 90% of domestic raw materials are used in the production.

According to Komadinić, that factory will be exclusively producing family packs because the trend of ice pop and ice cream cone consumption in the world is in decline.

- We plan to enrich our product portfolio with 3 to 5 new flavors every year. Our wish is to export 40% of products and sell the rest in the domestic market - CEO of Ice Cream Factory points out. 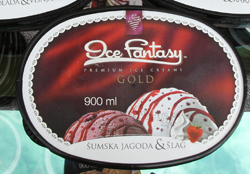 He says that bigger marketing campaign is planned to start in May, when the company will take part in the Agriculture Fair in Novi Sad, where they expect to get the highest marks for quality.

Ice Fantasy is exported to Russia, Montenegro, Bosnia and Herzegovina, Macedonia and Albania.

- We have signed the contract for export of 200 tons or 400,000 liters of ice cream to Russia. We have also sent samples to Bahrein and received a draft contract, so that we will probably start exporting our ice cream to that country as well. I was in Zagreb yesterday and I saw that people there are interested in our products, but Croatian Government protects domestic production by imposing high duties although Croatia is a member of the CEFTA Agreement, which is a big problem to us – says Komadinić.

He points out that Ice Cream Factory was not allowed to sell its products in certain stores in Serbia.

- Idea in Serbia does not allow sale of our products in its stores. Also, we can not enter several market chains and stores that are given certain percentage of sales by Frikom for not selling our ice creams. We intend to present the list of all these stores to the Commission for Protection of Competition - says CEO of Ice Cream Factory. 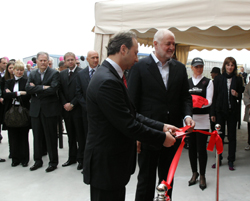 Slobodan Milosavljević, Serbian Minister of Trade and Services, who opened the factory, invited traders in Serbia to find the place for domestic products in their stores and enable consumers to choose according to quality.

He pointed out that the greenfield investment in Ice Cream Factory was significant for Serbian economy at the time of the crisis because it would create new jobs, domestic raw materials would be used and the factory would have local sales partners.

Radosav Komadinić says that he already has several new ideas for production in Serbia. One of them is a big factory of dried fruits, the kind that still does not exist in Serbia. According to him, major share of fruits from that factory would be exported.

- I have always had numerous ideas. I created the first private coffee factory in former Yugoslavia, Marbo Product, Aleksandar Palace Hotel in Belgrade, and many other companies – says Komadinić.