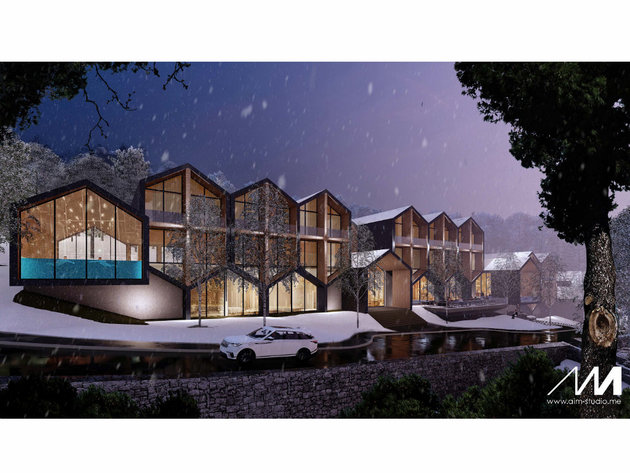 The hotel’s design (Photo: AIM Studio)
On Stara Planina, in the location of the small Hotel StarA, which was built as a mountain home in the 1980s and then turned into a small hotel for the purposes of the company Tigar a.d. Pirot in the 1990s, the company Slavninja 3 plus d.o.o, owned by married couple Nina and Nikola Mirotic, is to build a 4-star hotel.

The hotel will have a capacity of 66 rooms and five apartments, and the structure is inspired by Pirot carpets, says AIM Studio from Podgorica, which has been entrusted with the design.

– The hotel building, which is planned in four phases, is followed by an access road, taking into account the altitude changes. It is segmented into smaller units so as to better fit the human proportions and resemble a group of smaller facilities. These segments are inspired by the patterns on Pirot carpets, which come from the Serbian national tradition and which were included in the UNESCO list on non-material cultural goods of the Republic of Serbia in 2012 – the designers point out.

The hotel also has a garage with 35 spaces, a restaurant with 120 seats and a spacious balcony, a meeting hall, a spa center with an indoor pool and other features.

In close proximity, in the location of the existing outdoor basketball court, a sports hall and an open court are to be built. The hall will feature a gym of 200 m2 with a view to the court, stands of a capacity of 168 spectators, locker rooms, toilets and other auxiliary rooms. 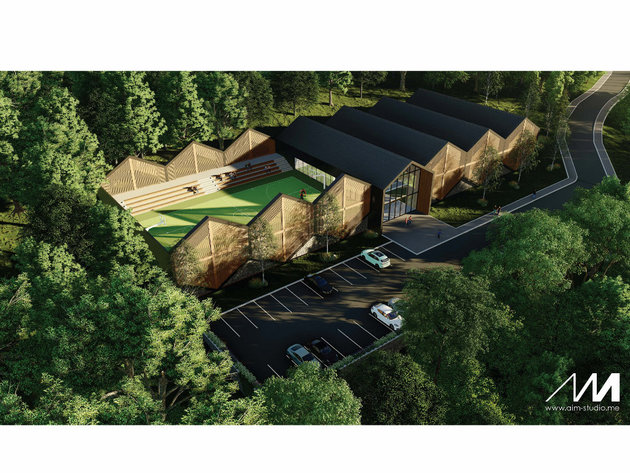 The hall and the open court (Photo: AIM Studio)
The designers add that, considering the current state, the area of Stara Planina and Pirot, which have great potential, is neglected. Therefore, in preparing the preliminary design of the hotel complex, one of the most important goals was for the hotel to work throughout the year.

– For that reason, numerous additional features, such as the physical therapy center for diagnostics and rehabilitation of sports injuries, outpatient clinics, a ski and a trim track, outdoor and indoor gyms, with the accompanying features for relaxation, will no doubt draw a great interest throughout the summer and the winter seasons – the Podgorica-based studio says.