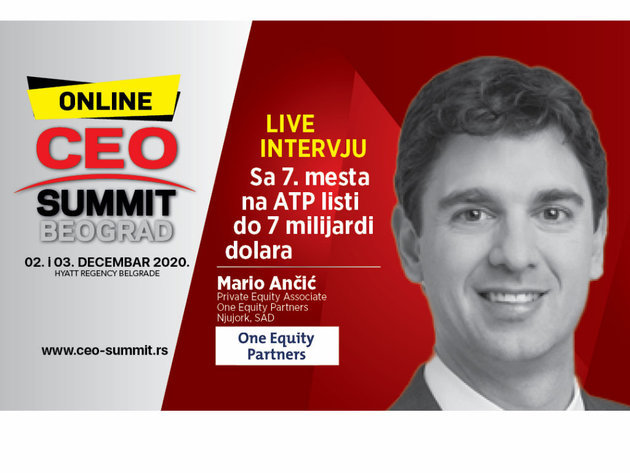 (Photo: CEO Summit Beograd)
Mario Ancic (37) has been developing his sports career and education since the earliest childhood. He graduated from the Faculty of Law in his birth city of Split. When he was 14, he joined the tennis scene by winning the European title in his age category.

As a junior tennis player, he played the final matches at the largest world tournaments, and at Wimbledon in 2002, in the senior competition, he won against one of the greatest tennis players of all time, Roger Federer.

However, injuries and health problems prevented Ancic from further developing his career as a professional tennis player. By the time he decided to withdraw from professional tennis in 2011, he had won three ATP tournaments, managed to reach the 7th spot on the ATP list and won the bronze medal at the Athens Olympics.

Before joining One Equity Partners in 2018, he worked as an attorney in the management of the NBA League and in the investment department of Credit Suisse in New York. Prior to that, he had earned an M.A. at the University of Columbia, USA.

– Our fund currently manages seven billion dollars. Each investment is specific and we are talking multimillion amounts which we deploy to help companies to continue to grow. In general, we are focused on companies in America and Europe. No one would be happier than me if we were to find something interesting in Dalmatia – Ancic said earlier this year.

Among his latest investments is that of USD 200 million in the IT company Infobip from Vodnjan in Istria, whose value subsequently jumped to billion dollars.

As Ancic explains, most private equity funds function on a partnership basis, and accordingly, everyone at One Equity Partners are indeed partners to a greater or lesser extent, that is, with more or less equipment.

Their founder, Dick Cashin, a former Olympics rower, is one of the biggest experts in the sector, with over 40 years of experience in investing. They have offices in Chicago, New York and Frankfurt. Of the 28 partners, seven participated in the Olympics. The job consists of meeting new companies, looking at potential opportunities, evaluating potential companies… after which they enter the managing board and help with the further development.

– At One Equity Partners, we research, follow and analyze everything that’s happening globally due to COVID-19 in order to see where this is going in the long term, because, as a private equity fund, we invest in companies and stay there for at least three to five years. However, this is not a structural crisis like the one from 2008 and 2009, when the entire financial system was experiencing problems. This is a unique occurrence in history, because, if you look at the results from the beginning of the year, there was a very good economic climate in the world and companies were achieving excellent or very good results, so the new situation was a shock to them – Mario recently stated for the Croatian media.

At the CEO Summit Beograd conference, which will be held online on December 2-3, in conversation with Milan Culibrk (NIN editor-in-chief), Ancic will be one of the seven speakers in the special segment CEO Business Insider. Within this segment, world experts from BP (ex-British Petroleum), LafargeHolcim, Sandoz/Novartis, Siemens, Pandora, The Body Shop and other, will tell the local business community for the first time, using their own examples, about the models for overcoming the (un)expected obstacles on their road to development, business optimization, the need to balance the process of creating stable and sustainable companies in the long term, with a steady growth of efficiency and raising all the key performances today.