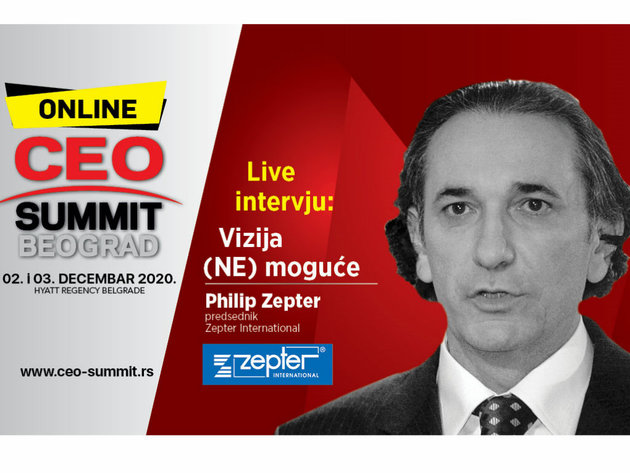 Philip Zepter (Photo: CEO Summit Beograd)
Philip Zepter will be an exclusive guest of the most important business event of the year in Belgrade.

How to ensure a return to the beaten paths of accelerated economic growth, how to keep the existing jobs, how to continue investing, all this in an environment full of uncertainties, until a permanent solution is found for the health problem? Can switching to new technologies neutralize the negative consequences of the pandemic? Only true leaders know the answers to these and many other questions, those who have already shown in practice that they can respond to each challenge quickly and efficiently, to change the organization as they go along, as well as the business system, to reconnect the broken chains, to organize remote work wherever possible. These leaders have already shown that they know how to manage even in crisis situations.

Businessman Philip Zepter, who very rarely takes part in local business forums and who gave his last interview for the Serbian media three years ago, will be a guest at this year's CEO Summit – Summit of Business Leaders, to be held on December 2-3 in Belgrade.

He is one of the richest Serbs, whose wealth has been estimated at several billion euros, and he has also placed on the lists of the wealthiest people in magazines such as Forbes and the Polish Wprost.

Over more than 30 years of operations, so far, he has invested around EUR 250 million in the Serbian economy as the owner of Zepter International. He has also invested in Serbian sports. The Zepter Sports Fund has financed some of the currently best known Serbian sports people, such as athletes Ivana Spanovic and Dragana Tomasevic, wrestlers Davor Stefanek and Kristijan Fris, shooters Ivana Maksimovic and Andrea Arsovic, kayakers Ognjen Filipovic and Dragan Zoric, swimmer Ivan Lendjer and others.

With his wife, Madlena Zepter, he has invested around EUR 50 million in the Serbian culture, founded the Zepter Museum and the Madlenianum Opera and Theater.

At the CEO Summit, Zepter will talk with the editor-in-chief of the NIN weekly, Milan Culibrk, about how to ensure a return to the beaten paths of accelerated economic growth, how to keep the existing jobs, how to continue investing, all this in an environment full of uncertainties, until a permanent solution is found for the health problem. One of the topics will be whether a switch to new technologies can neutralize the negative consequences of the pandemic.

Zepter International is a multi-brand, a multinational company which produces, sells and distributes and distributes exclusive, high-quality products, mostly through its own sales network, but also in its sales salons. Together with Zepter Finance Holding AG, the leading company in financing, banking and insurance, it operates as part of the Zepter Group.

Each ten seconds, a new presentation of a Zepter product begins somewhere in the world, because the Zepter company is present on five continents, in over 60 countries in the world. Zepter has eight factories in Switzerland, Germany and Italy and over 320,000 square meters of office space in the best locations in major cities worldwide. The past 25 years have been very successful for Zepter, whose products have been bought by over 80,000,000 satisfied customers.

Zepter's success story began over three decades ago, in 1986, with the founding of the company in Linz, Austria. The first factory was located in Milan, Italy. It produced top-quality Masterpiece cookware and artistic decorative pieces for tables. Throughout the world, the Masterpiece cookware is still synonymous with long-lasting value, and the modern Menfi Industria factory in Milan, which produces over 1,000,000 pieces a year, became a new seat and the place where the Zepter empire was born, with a business space of 24,000 square meters.

Zepter Group expanded its activities by entering the medical devices market in 1996. Through the purchase of the Swiss company Bioptron AG, Zepter stepped into the field of light therapy. Over 2,000,000 people owns the Bioptron light therapy system and it is one of the best known Zepter products, recognized worldwide.

The same year, 1996, the Swiss company Intercosmetica Neuchâtel SA became a member of the Zepter Group. Through substantial investments in production facilities, research and development, new production lines and a biotechnological laboratory were opened. The capacities doubled, and the production focused exclusively on top-quality cosmetics. Today, Intercosmetica Neuchâtel SA produces around 5,000,000 cosmetics products a year. Soon after this strategic investment, the company moved its seat to Switzerland and continued expanding to new markets and new technologies.