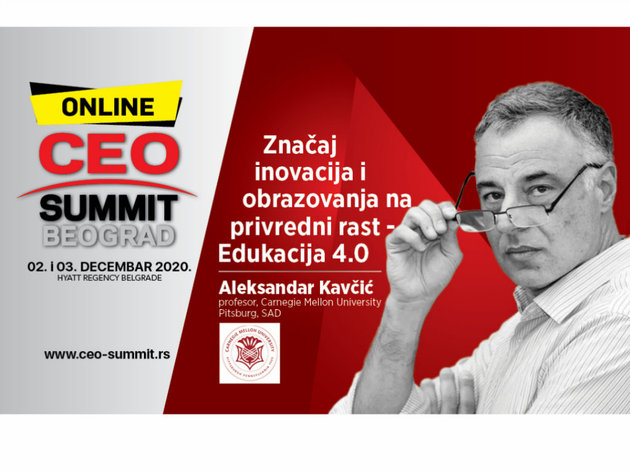 Aleksandar Kavcic (Photo: CEO Summit Beograd)
The next generation of elementary school pupils might be provided with free school books, which would be available online. If the idea of professor Aleksandar Kavcic is adopted, the pupils' parents will no longer have to spend money on buying school books. For years now, Kavcic has been donating computers to the Mathematical Grammar School in Belgrade though his “Alek Kavcic” foundation. As for the school book market, a total of EUR 100 million changes hands each year in it, although this engineer and researcher estimates that the cost of making free school books for all elementary school grades is only a million euros: from paying for copyright to the ministry's approval.

– Those who want to do so can study using the PDF format, download the files, print them out and that's the whole idea. What the foundation is doing should be an indicator that the state could do the same. The foundation is even ready to simply let the state take over the whole model if it wants to – Kavcic told RTS.

Back in August, in his interview for NIN, Kavcic said that school books must be free and that it is the case even in the West.

– In only five years, free school books would save EUR 500 million for citizens of Serbia for some other purposes. That's nearly as much as they received through the one-off aid of EUR 100 each, before the election. Furthermore, this is morally right thing to do. The authors would not lose anything either, because my foundation would pay them a fee for each school book, which would have to get a green light by the Ministry of Education, just like any other, before being issued – Kavcic told NIN.

Kavcic, born in Belgrade, studied at the Mathematical Grammar School in Belgrade and graduated from the Carnegie Mellon University. He has held lectures at Harvard. His patent – a reader of magnetic memories, was used illegally by Marvel. After he won the years-long lawsuit, he was paid USD 750 million in damages. He now wants to use some of that money to provide free school books for pupils in Serbia.

Professor Aleksandar Kavcic will talk about this and about the importance of innovations and education for the economic development of Serbia at the CEO Summit Beograd conference, to be held online on December 2-3, 2020.

Along with professor Kavcic, some of the most successful business people from the region have confirmed their participation in the summit, including Philip Zepter (Zepter International), Andrej Jovanović (Moji Brendovi), Aleš Mozetič (DonDon), Miljenko Pivac (Grupa Pivac), as well as the heads of global corporations BP (formerly British Petroleum), Novartis, LafargeHolcim, Pandora and others.