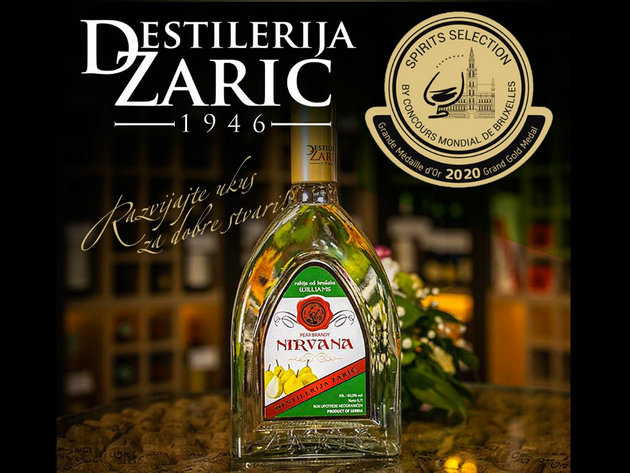 Illustration (Photo: Destilerija Zarić)
The pear brandy Nirvana, produced by the Serbian distillery Zaric, has been pronounced one of the ten best alcoholic spirits in the world.

At one of the most prestigious and certainly the most challenging world competitions, Concours Mondial de Bruxelles Spirits Selection, held between October 30 and November 1, 2020, in Brussels, this Serbian fruit brandy was pronounced one of the best in the world.

According to the distillery's press release, after their Williams pear brandy was awarded the Grand Gold medal, it entered the final of this elite contest, competing against the best world spirits.

– In that final, it beat 1,400 other samples and many well known and recognized world producers and their best products. Our fruit brandy placed in the top ten among the very best, defining it as a drink of extraordinary quality – it is pointed out.

At this year's contest, another Zaric Distillery's fruit brandy, the raspberry-based Opsesija, also got an award, a gold medal.

– This only shows once again that the Serbian brandy can and should stand shoulder to shoulder with the best world whiskeys! It is of great importance for Serbia that a recognizable Serbian product such as the fruit brandy is placed among the top spirits at one such contest – the Zaric Distillery says.

Let us also remind that Nirvana has won valuable awards before. At the WSWA Convention in Las Vegas, it won the most prestigious “Double Gold” award. By winning this medal, Nirvana earned a place on one of the historical display shelves at Hotel Caesars Palace in Las Vegas.

Most samples this year sent from China

The competition included 1,400 spirits from 84 countries of the world. Other Serbian fruit brandies also won gold medals: the apricot brandy by Hubert 1924 and the raspberry brandy Opsesija by the Zaric distillery. The quince brandy by Stara Pesma won a silver medal.

Most samples this year were sent from China, as much as 23%, followed by France, Mexico, Brazil and Italy, the Vino & Fino portal reports. The most frequent among the samples was the Chinese drink baijiu, followed by rum and cachaca, brandy and gin. The samples were rated by a panel of 60 judges, who came mostly from Europe this year due to the difficulties related to intercontinental travel.

This is the list of the ten best spirits on the planet, according to the jury at the reputable contest held in Belgium: