By Protecting Ourselves, We are Protecting Others as Well – Prevention as the Best and Cheapest Form of Protection 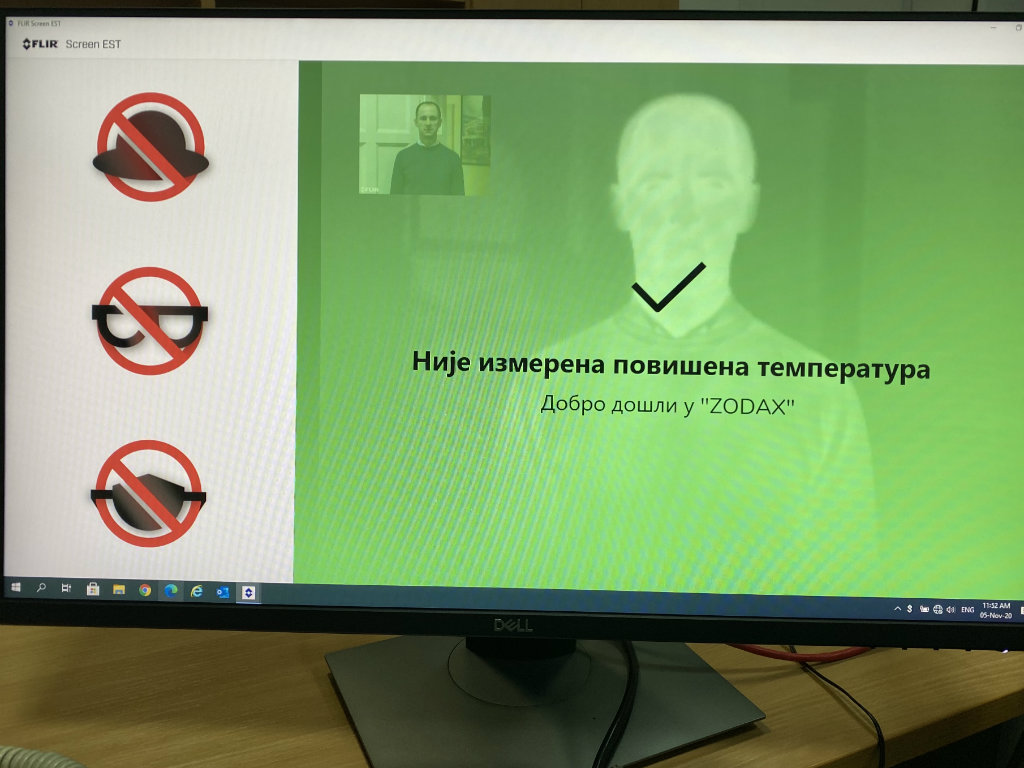 As the company`s director, Zoran Jaksic, says, digitalization brings new technologies along, and both in today`s real world and the virtual world, the pandemic is a threat that we need to fight against wisely, preventing misuse, using the advantages it provides in a proper way, which requires educated workforce and clear and timely laws. Digitalization, the carrier of the business of the future, entails responsibility.

Zodax offers various solutions when it comes to prevention in various spheres of the economy, or, better said, life. These are systems of technical protection, based on the technology of thermal-thermal vision cameras.

Here are only some of them:

Thermal cameras have shown their usefulness in prevention of spreading of respiratory infections. One example are FLIR thermal cameras at the airports in Belgrade and Nis, which were installed at the initiative of the Ministry of Health – Sector for Inspection Supervision.

Thermal cameras detect, in a contactless and automated way, persons with high body temperature, allowing for a civilized selection of people, which are sent to a further medical check after the first indications of the infection.

– I emphasize that thermal cameras do not heal, nor can they be used for diagnosis. Their implementation merely detects people with high temperature – Jaksic says.

What happens when you`re risking your life to save others?

Zodax takes care of those who act in states of emergency, especially when it comes to fires, considering that firefighters are exposed to numerous unknown factors when they set out to address a situation.

– Fire systems, specially designed thermal cameras, are meant for firefighters and rescuers for the purpose of finding persons that need help and saving their own lives and lives of their colleagues, as well as detecting potential new fires, especially in chemical facilities, warehouses where the stored goods are not registered and all other situations in which it is important to make correct decisions on time with the help of said equipment – Jaksic says.

When it comes to FLIR ITS equipment, it is applicable in smart traffic management, in cities, on roads, railway, in tunnels, on bridges and so on, through increased safety of participants in the traffic, qualitative management, reduction of traffic jams and with that the potential pollution.

– The awareness of the special importance of ITS equipment for the safety of children in traffic, the cooperation with education institutions through practical examples quickly equip students, parents and teachers with the necessary knowledge base, which, I hope, is then supplemented with some new solutions that those young people come up with. Solutions for rail crossings, automatic detection of incidents in tunnels, on bridges, highways, early detection of fires in tunnels are already irreplaceable worldwide and I hope that they will be become so here as well – Jaksic says.

Software and hardware solutions are available, which, by measuring parameters such as air humidity, temperature, the proper functioning of air conditioning and similar factors prevent the occurrence of problems and halts in the operations of data centers, base stations and server rooms. The aim of this solution is to protect from data loss.

New technologies through the prism of nanotechnology and nano-disinfectants

– In cooperation with the company SpeedUp International, we want to highlight two products that are much needed in today`s times – Jaksic says.

The nano-disinfectant for rooms, objects and tools is a nanotechnology-based product meant for thorough disinfection of working surfaces, tools and rooms in health institutions, dentist`s offices, hotels, restaurants and bars, education institutions, social institutions, kindergartens, vehicles, other companies, households, everywhere where people are looking for a clean and healthy environment.

It`s an ecological product based on fully natural ingredients and at concentrations safe to human health.

It acts immediately, efficiently and enables strong and safe protection in fighting pathogen microorganisms within 30 seconds. With its long lasting effect, the nano-disinfectant enables a long-term anti-microbe and anti-fungus protection from not just the existing microbes but new ones as well.