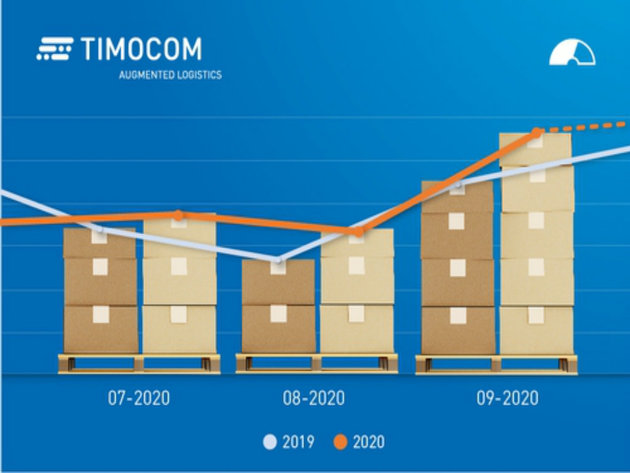 (Photo: TIMOCOM)
European road transport of goods increased considerably between July and September 2020. The cargo registered by TIMOCOM's transport barometer in the third quarter of 2020 once again compensated for the very weak second quarter of the same year, caused by the coronavirus pandemic. Each month's numbers exceed even the values from 2019.

– The reasons for this can certainly be found in the relatively relaxed situation when it comes to the infection in the summer months and the apparent need to compensate for what was missed after the quarantine in many European countries – says Gunnar Gburek, TIMOCOM's spokesperson. For example, in early June, the extremely affected Italy ended its very strict quarantine, and Spain also ended the state of emergency in late June. After the production stopped in nearly all European countries, it once again grew considerably.

Obviously, the great need to compensate for what was missed is recognized in the internal traffic. Inside Germany, the logistics largely compensated for the losses and also, without exception, exceeded the previous year's values: In the third quarter of 2020, over a million pieces of cargo more were brought in than in the same period in 2019. Compared to the second quarter of 2020, the value grew exponentially. Observed by months, this is what it looked like: July 3%, August 17%, September 73%. French logistics also compensated for the losses in the national transport. In the third quarter of 2020, the volume in that country grew by 12% a month.

Tendency of growth in international transport

The slowest catching up as well

The traditionally weakest countries have also strengthened. The need to compensate for what was lost after the quarantine is shown even in those countries that were generally in the negative compared to 2019. Despite the negative comparative values between 2019 and 2020, these countries also showed a marked improvement in the third quarter. For example, from Germany to Hungary: July -44%, August -34%, September -16%; or, Germany to the Czech Republic: July -41%, August -8%, September -3%.

Since 2009, TIMOCOM's FreightTech transport barometer has been analyzing data from 44 European countries about the trends of transport supply and demand in the cargo market integrated in the Smart Logistics System). More than 135,000 users generate up to 750,000 mutual offers of cargo space and cargo each day. The system supports over 45,000 TIMOCOM's clients in reaching their logistics goals in a smart, safe and simple way.