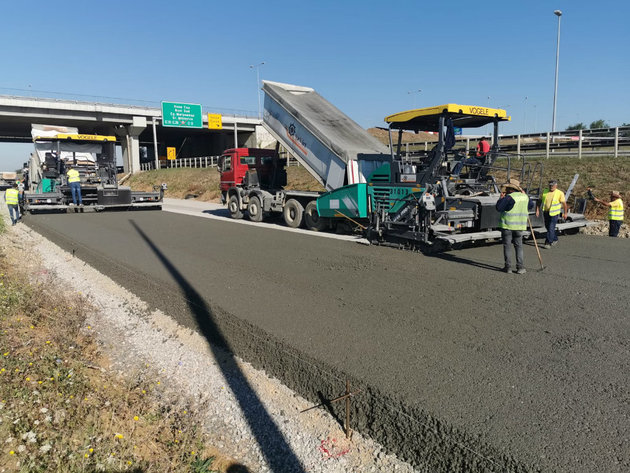 (Photo: Miloš Vujković)
The works on Section 4 of the Bypass Route Around Belgrade are being conducted at the planned schedule, and the opening for traffic is planned by the end of the year. If the works continue at the same tempo, the entire bypass route, of the total length of 47 kilometers, is expected to be completed within the deadline, in early 2022.

On a part of Section 4 (of a total of 4.6 km), the method of stabilization of the base layer with the HRB adhesive, the so-called “cement stabilization”, was implemented. This method is used in cases when the performances of the road structure, as defined by the project, cannot be realized through the use of natural materials.

The stabilization method on these infrastructure projects has confirmed its advantages compared to the traditional construction method, providing additional support, firmness and durability of the structure.

In executing the stabilization process, the Azerbaijani company Azvirt uses the Lafarge hydraulic adhesive for roads Beosol 22.5, at the recommendation and with the formula of the Institute for Roads. Beosol 22.5 is specially designed to stabilize ground stone aggregates and has been tested in detail, by the Lafarge expert team and relevant accredited labs which specialize in road construction.

The bypass route around Belgrade is predicted to be the busiest part of Corridor X, which is why the use of the best quality materials is a priority, so as to ensure its longevity.
Companies:
Azvirt Beograd
Lafarge BFC d.o.o. Beočin
Tags:
stabilization of the base layer with the HRB adhesive
cement stabilization
Beosol 22 5 hydraulic adhesive for roads
bypass route around Belgrade
Corridor X
Share: