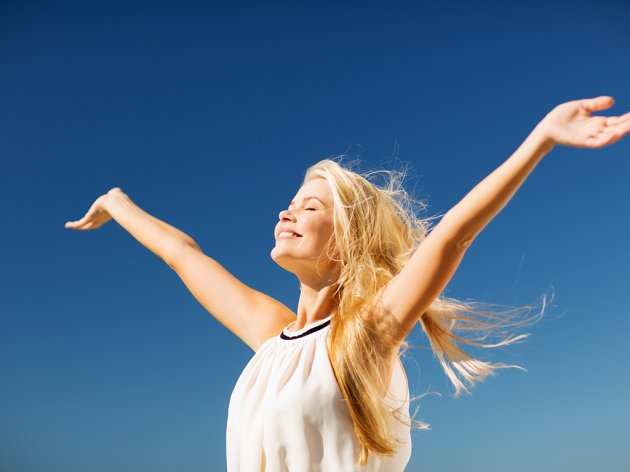 (Photo: Syda Productions/shutterstock.com)
In 2014, two psychologists at the University of California, Berkeley, launched an online course with the goal of teaching students how to be happy, through both science and practice, in just eight weeks, CNET writes.

Thousands of students took the Science of Happiness course and learned about the science of connection, compassion, gratitude and mindfulness. Perhaps more importantly, they also completed a series of simple activities that research suggests increase happiness.

Those who fully participated saw their positive feelings increase each week. They reported feeling less sadness, stress, loneliness, anger and fear, while at the same time experiencing more amusement, enthusiasm and affection, as well as a greater sense of community. During the course, students' happiness and life satisfaction increased by about 5%. And that boost remained even four months after the course ended.

Can you really change how happy you are that easily? According to the research, yes. Even during challenging times, like the coronavirus pandemic.

– There's a misconception that happiness is built-in and that we can't change it – says Laurie Santos, a professor of psychology at Yale University who teaches a free Coursera class called The Science of Well-Being.

One popular theory that suggests we can affect our feelings is the happiness pie chart, proposed in a 2005 paper published in the Review of General Psychology. At the time, researchers suggested that while 50% of your happiness is determined by your genes and 10% by your life circumstances, 40% is determined by your daily activities. Though this breakdown has faced criticism (that it's too simple, and doesn't take into account how your genes and environment interact), it taps into an idea that's fairly widely accepted: At least some of your happiness is within your control.

– The science shows that our circumstances -- how rich we are, what job we have, what material possessions we own -- these things matter less for happiness than we think – Santos says.

Another big misconception? That happiness is the same as a consistently positive emotional state, says Emiliana Simon-Thomas, who co-teaches Berkley's The Science of Happiness course and is also the science director of Berkeley's Greater Good Science Center.

Being happy doesn't mean you feel pure joy and cheerfulness every hour of every day. Humans aren't designed that way. You experience setbacks, problems, the loss of loved ones. And those negative feelings are an essential part of your emotional life, too.

Happiness, experts say, means accepting negative experiences, and having the skills to manage and cope with them, and to use them to make better decisions later.

– We think happiness is like a Facebook reel of vacations and achievements and checkboxes for life goals. But people who pursue happiness in that sort of belief system end up being less happy than people who define happiness in a more overarching, quality-of-life way – Simon-Thomas says.

The appealing thing about being able to control at least part of your own happiness is you can do it from home, or anywhere, for free.

Here are five exercises that clinical studies have shown improve your feelings of happiness and well-being.

(An important caveat: For people with clinical anxiety, depression or other mental health issues, these exercises aren't a replacement for therapy, medication or other professional interventions. However, some research suggests they can be beneficial as a supplement to those services.)

Social connection is the biggest factor affecting happiness, multiple studies have found. One of the most convincing is the Harvard Study of Adult Development which, for more than 80 years has followed the lives of hundreds of participants and, now, their children.

Close relationships (with spouses, family, friends, community members) are the biggest factor keeping people happy throughout their lives, researchers discovered. People with strong relationships are happier, and physically and mentally healthier, than those who are less well-connected. Quality relationships (not quantity) are better predictors of a long and happy life than social class, IQ or genetics, according to the study.

– We figured that if you have good relationships, you're likely to be happier, but we did not believe at first the data showing us that good relationships actually keep our bodies healthier and help us live longer. And then other studies began to find the same thing – says Robert Waldinger, the current director of the study.

These relationships require work, Waldinger says. You have to keep up with people, which means giving them your time and attention -- especially during the pandemic. Call them, video chat with them, take a socially distanced walk if you can. Deliberately choose to spend time together, he says.

Other ingredients for a long and happy life include not smoking or abusing alcohol, exercising regularly and finding work-life balance, the Harvard study found.

Engage in random acts of kindness

Find ways to perform small, random acts of kindness during your day. These acts can be incredibly simple, like making your spouse coffee before work.

Deliberately performing random acts of kindness can make you feel happier and less depressed and anxious, according to a series of studies.

– This works because these acts tap into your natural prosocial behavior, or the basic human impulse to help others – Simon-Thomas says. When you invest your own resources in the welfare of others, it activates your brain's reward system -- you feel good that you made the other person feel good.

Writing down three things you're grateful for at the end of each day, and why they happened, leads to long-term increases in happiness and decreases in depressive symptoms, according to a 2005 study from Martin Seligman, director of the Positive Psychology Center at the University of Pennsylvania. It doesn't matter how large or small each thing is -- just write them down, in a notebook or your Notes app or wherever.

For example, you might write down "Finished a paper, because I worked hard on it. Had a good talk with my friend because she called me. Went for a walk and saw some cute dogs, because it was a nice day."

– The point is to train your mind to orient itself to the parts of your life that are good, instead of directing your attention to things that are stressful or irritating – Simon-Thomas says.

You may have already tried all those mindfulness apps. But exercises like meditation that teach your brain to focus on the present instead of the past or future can increase feelings of self-acceptance, according to a 2011 study from the International Journal of Wellbeing.

– The idea is to be present -- don't judge your emotions, but recognize them – says Elizabeth Dunn, a psychology professor at the University of British Columbia.

This might be the most challenging item on the list, Simon-Thomas says. Particularly in the West, people have adopted a propensity for self-criticism as a cultural value, and tend to self-punish when dealing with setbacks and failures, she says. But excessive self-criticism gets in the way of achieving your goals.

There are three parts to practicing self-compassion, and they draw on some of the other exercises on this list: Be present in the moment rather than dwelling on the past or looking anxiously to the future. Understand that setbacks are part of being human, and all people experience them. Cultivate a warm, supportive inner voice rather than a hostile, self-critical one.