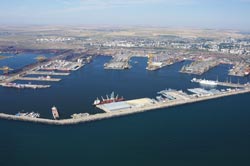 Corridor 7, the trans-European waterway on the Danube river, is equally big chance for development of Serbia as Corridor 10. However, our country has not managed to use this advantage to a full extent. Big interest in expert meeting Development of Container Transportation on the Danube, which was held in Belgrade, speaks in favor of the fact that the river transportation should become an irreplaceable and unavoidable component of the transportation system in Serbia, while the Danube should be the "backbone" of the economy's development. 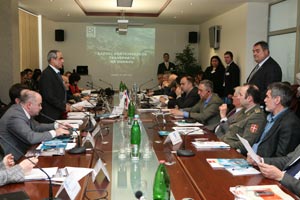 The basic idea of the meeting was to provide the review of the situation in the field of container transportation on the Danube, the current state and appraisal of the success of existing services, real prospects and potentials, solutions to noticed problems and the help of the authorized institutions in resolving the problems of significance for functioning and development of the container service on the Danube.

The President of the Chamber of Commerce of Belgrade, Dr. Milan Janković, said that, taking in consideration the overall social-economic potential and development of the Danubian regions and countries, PKB strived to improve the joint activities that would lead to significantly better exploitation of traffic and technical infrastructure on the Danube.

- Development of container transportation on the Danube represents a big challenge for Constanta port because it is one of the port's most important activities - said Vladan Mišić, the representative of Constanta port in Belgrade, and added that the cooperation with Serbian economy sector over the previous few years had given good results. 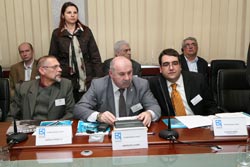 Ambroziu Duma, a member of the management of Constanta port in Romania, said at the meeting that total exchange with Serbia had grown significantly when compared to the previous years.

- Based on these information and the growth of volume of traffic with Hungary, the expectations are that such trend will be continued in the following period and that the Danube will represent the main axis of the flows of goods between these regions - said Duma.

People in the developed countries started using the advantages of "free" waterways long time ago. The system of canals gave the new quality to these waterways. However, Serbia is not using all potentials.

Speaking of the advantages of river transportation of goods, Zoran Netković, the CEO of maritime-river agency Agent Plus, told eKapija that the transport by water was, by the definition, among the cheapest forms of transportation.

- It requires relatively smaller investments in infrastructure, while it offers great opportunities and capacities. Packing of goods in containers and technological progress make this form of transport more and more compatible with other forms of transportation, which enables successful fitting into the concept of multimodal transport. It is ideal for bulk freight and it is the most acceptable form of transportation when it comes to environment protection - Netković explained.

In spite of these advantages, the entrepreneurs who deal with the transport by water are experiencing numerous problems.

Some of them are:

- Infrastructure in ports and on border crossings is insufficient, the facilities in anchorages are not secured, the supply capacities for vessels are small, it takes much time for the legislation in this area to be brought in accord with European standards and practical needs, oscillations in the prices of portage on the Danube are frequent, navigation can be impossible due to wind, ice, water level, lack of maintenance of canals, etc. - Zoran Netković explained for eKapija. 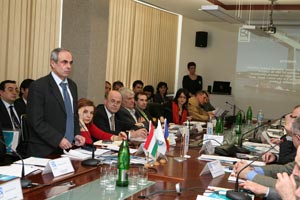 Although Serbia has adopted the Strategy for development of all forms of transportation prior to 2015, Pavle Galić, the Assistant Minister of Infrastructure, said that very little had been done in the domain of container transportation development to the date. However, as he explained, it is possible that the plan will be made for realization of further activities that must be directed towards liberalization of combined transportation activity.

- European agreement on main internal navigable waterways is of international importance and Serbia has entered the procedure for its ratification. The plans that concern the Danube are being made at the moment and their main pillar is transportation, so that maximum efforts will be put into their realization - he said.

The meeting was also the occasion for presentation of the data on international flows of goods on the Danube and business profiles of Hungarian, Austrian, Romanian and Serbian companies - UTC Overseas from Hungary, Ihorks Shipping & Trading from Romania, Luka Baja from Hungary, Agent Plus from Belgrade, Jugoagent from Belgrade, Helogistics Holding Gmbh from Austria, SEE Container Group from Romania.

Participants in the discussion that followed were the representatives of the Republic Statistics Institute, Željko Lesić, and the Mediterranean Shipping Company (MSC), Zorica Katanić-Rošaj, Jugoagent's CEO Miroslav Savić, Agent Plus' CEO Zoran Netković, the manager of one of the sectors of Dunav Osiguranje, Milica Slijepčević, and many others.

Serbian Deputy Prime Minister Božidar Đelić has recently said that between 25m and 30m EUR are planned to be provided from the European Union's IPA funds in 2011 for the projects on the Danube. He said on that occasion that only 9 out of 24 municipalities on the Danube in Serbia had submitted the projects for the Danubian strategy. This strategy will be finished by the end of this year and adopted in the first half of year 2011, during Hungarian Presidency of the European Union.

- East Point plans to expand the capacities of the silo in Constanta port from 108,000 to 150,000 tons, for which between 32 and 35m EUR will be set aside - Zoran Drakulić, East Point's President, told eKapija recently and pointed out that the company would soon to end the negotiations with the strategic partner for that investment.