Here's What the Linear Park in Belgrade Will Look Like – Project Worth EUR 55 Million to be Modeled After New York, Paris and Valencia 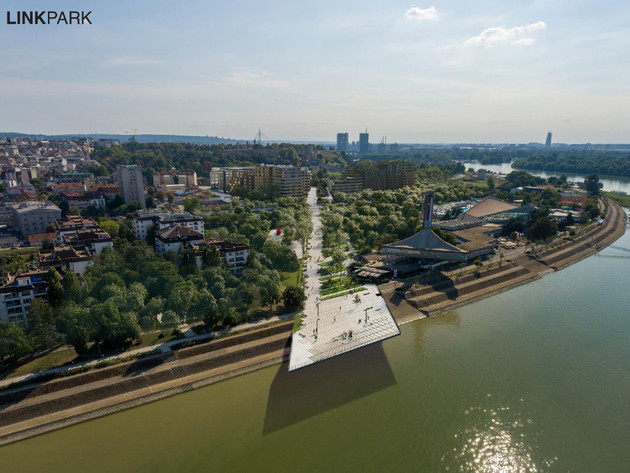 (Photo: Beoinfo)
The head urban planner of Belgrade, Marko Stojcic, has announced that the construction of the Linear Park should begin in early 2021. The park will take up 4.6 square meters, and the works will take around two and a half years, Stojcic said for Studio B. The estimate, he says, is that the project is worth around EUR 55 million and that the park will have a drastic influence on the development of Belgrade.

– The linear park will have ten units. The preliminary designs were prepared by 55 young people, who qualified through the procedure we carried out in early 2021. Those ten units make up a single functional whole that comprises the Linear Park. It begins around thirty meters from Beton Hala and end at Pancevo Bridge.

– The territory covers the old railway, which has not been operational since we started building the Belgrade Waterfront. The railway network changed completely with it, so we've finally managed to penetrate from the urban parts of the city to the Sava, and now we can do the same on the Danube side with the Linear Park – Stojcic says.

He points out that, for the first time since it was built, that part of Belgrade will thereby be fully open for pedestrian and cycling corridors, providing unobstructed access to the Danube, Beoinfo reports.

– All the areas around the Linear Park will finally be revived. It will be a healthy place to live in and it will finally feature true parks, modeled after New York, Paris and Valencia – Stojcic says.

According to him, the Linear Park will fully transform the entire stretch of 4.6 kilometers, since the Linear Park takes up the public area which used to feature a railway. All the parcels, he says, are owned by the City of Belgrade or the Republic of Serbia, “but we will also penetrate the settlements on both sides wherever possible, in order to connect it with the existing open spaces in residential blocks.”

– The idea is for that part of the city of 4.6 kilometers, with one kilometer across, to be renovated at some point, but we will now go unit by unit. We hope that the public procurement procedure for the execution of works will be carried out successfully, and it entails execution by units, because there are plenty of structures that need to be removed. The property-legal procedures should start in late January 2021, so it will certainly take two to three years – Stojcic said.

– We have prepared a preliminary design, we are working of the detailed regulation plan, we have secured funds for the project documentation, the public procurement procedure for which is most probably to open in early February – he says and adds that, as soon as this is completed, the next phase is to begin – the public procurement procedure for the works.

– The phases depend on the estimate of the procedure for the property-legal procedures, which we need to carry out for each of these facilities. Depending on how fast this is done, we will see which unit will be the first, second, third one, but there will most probably be two phases, and maybe even three. Perhaps the simplest units, structurally, are the first three ones, but they are also the most complicated, because they cover a part of Kalemegdan's ramparts. So, it will entail the reconstruction of the ramparts, and there's also the area around the Nebojsa Tower, a culturally and historically significant site.

– We will try to carry out the works there, so that there's flood protection. Whenever the water levels rise, everything is flooded there, so we will try to solve that problem as well. Certainly, each unit carries certain problems with it, perhaps primarily in the property-legal sense, and the connecting to the traffic system will also be a challenge, because the Linear Park has a continuous length of 4.6 kilometers and is not intersected by roads at any point. This means that there will be underpasses or some other structures everywhere, but the entire length of 4.6 kilometers will be available to pedestrians and cyclists – Stojcic emphasized.
Companies:
Grad Beograd
Tags:
Linear Park
Marko Stojčić
construction of a linear park
pedestrian corridors
cycling corridors
Nebojša Tower
Kalemegdan ramparts
Share: