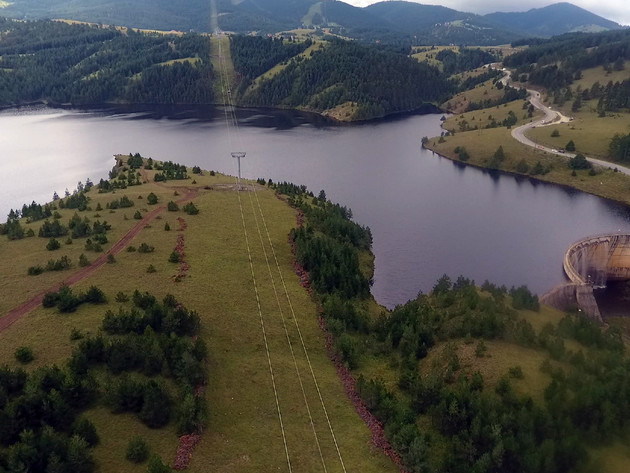 (Photo: eKapija/ D.Petronijević)
The capital investment projects on Zlatibor are close to completion. The lake fountain is soon to start working, and the commissioning of the Gold Gondola will mark a new chapter in Serbian tourism, the president of the Municipality of Cajetina, Milan Stamatovic, announces.

Regular infrastructure maintenance on Zlatibor is part of everyday activities, and the heads of the municipality are especially proud that the capital investment projects are close to completion. Stamatovic reminds that, with the reconstruction of the King's Square and its access routes, the residents of Zlatibor and all its visitors are getting something that many tourist centers in Europe don't have.

– Beneath the square is a floor heating system which will enable tens of thousands of visitors to our mountain to freely and safely enjoy all the features of the Serbian winter capital. I hope that the coronavirus situation will wind down considerably by New Year and that, together with the residents of the municipality of Cajetina and all our dear visitors, we will once again enjoy a series of New Year's live shows – Stamatovic says.

The lake at the center of Zlatibor, a symbol of this mountain beauty, will soon get a new look, now featuring a fountain, the Tourism Organization of Zlatibor says on its website.

– Since the construction, the lake has not been rebuilt with this amount of detail. Its bed has been reconstructed, a modern drainage system has been established, new green areas have been formed around the lake, the pedestrian lanes and the plaza in front of the King's Fountain have been reconstructed and the fountain in the center of the lake will start working soon. In the winter period, the ice skating rink will be available to the visitors of all ages – Stamatovic announces.

– I'm not exaggerating when I say that the commissioning of the gondola will open a new chapter in Serbian tourism. Some small details remain to be done and this tourist attractions will be ready to welcome hundreds of thousands of people who love to spend time in the nature. We will not stop there either. We are already considering a new gondola route from the Ribnica Lake to the Cigota peak. It will be a true delight for all senses – Stamatovic emphasizes.

This summer, numerous visitors enjoyed Zlatibor's magical landscapes. Some of the less well known places were shown in “The Hidden Zlatibor” episode, which ends the campaign of the TO Zlatibor titled “Your Zlatibor”.

The director of TO Zlatibor, Vladimir Zivanovic, emphasizes that the most visited Serbian mountain has numerous features for even the most demanding guests.

– We have noticed that, this season, the tourists began discovering the less visited places and exploring a bit more hidden locations, which are known to us locals. Through this last episode of the campaign, we wanted to showcase the wooden churches in Dobroselica and Jablanica, monasteries Uvac and Dubrava, the villages of Semegnjevo and Ljubis – Zivanovic reveals.

The “Your Zlatibor” campaign also presented the well known locations, such as Stopica Cave, the waterfall in Gostilje, the Dino Park, which broke all visitation records this summer. The guests were provided with various adrenaline features, from paragliding, through the zipline, to the quad rides, and were able to see that intact nature is located only several minutes away from the mountain center.

– There has been frequent criticism over the urbanization of Zlatibor recently and that's why we want to show to the tourists that only 800 meters from the King's Square they can enjoy a walk in a pine forest, by the rivers, on vast meadows, breathing in the clean air. Through this campaign, we wanted to motivate the visitors to explore the nature of Zlatibor themselves. Judging by the reactions, comments and views on social networks and through conversations, we see that we've managed to do so – says the director of the TO Zlatibor.
Companies:
Opština Čajetina
Gold gondola Zlatibor Čajetina
Turistička organizacija Zlatibor
Tags:
projects on Zlatibor
Milan Stamatović
Kings Square
Kraljev trg
Vladimir Živanović
wooden chruches
Dobroselica
Jablanica
Uvac
Dubravo
Semegnjevo
Ljubiš
Stopića Cave
Gostilje waterfall
Dino Park
Share: