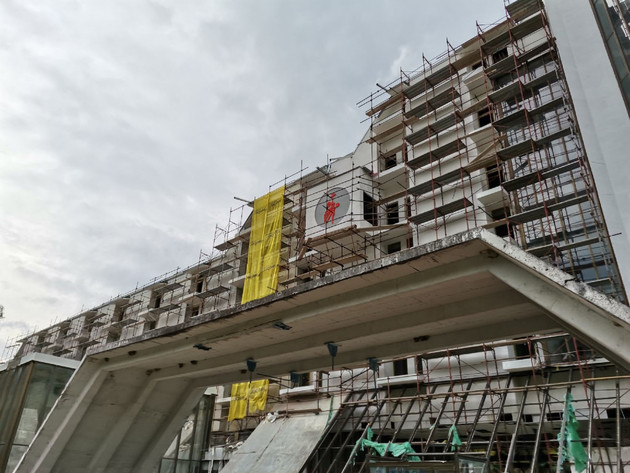 Works on the hotel in Kursumlijska Banja (Photo: AD Planinka)
Not even the coronavirus pandemic has slowed down the activities of AD Planinka on the construction of a hotel in Lukovska Banja and the reconstruction of a complex in Kursumlijska Banja. Both hotels, which will be able to welcome their first guests next year, will improve the tourist offer of the spas known for their thermal mineral waters, and these valuable investments will also create jobs for around 200 workers.

The reconstruction of the complex in Kursumlijska Banja, once very popular in the former Yugoslavia, started immediately after the signing of the agreement in January 2020. AD Planinka, which thereby became the official owner, set aside EUR 12 million for the revitalization of the complex.

As the company told our portal, former Hotel Zubor will now have 300 beds, single-bed, double-bed and comfort rooms and apartments and other features of the complex will largely be based on the medical properties of the water and the natural potentials of the location.

– During their stay here, the guests of Kursumlijska Banja will have an opportunity to use top-quality features of the medical program, which will entail full diagnostics, therapy and preventive treatment coordinated by specialized medical staff. Also, they will be able to enjoy the various features of the wellness center (pools, salt rooms, steam baths, saunas), as well as an outdoor pool and an outdoor-indoor pool – the company says.

The works on this hotel, whose opening is planned in the second half of next year, are in progress, and the next period will see the completion of the replacement of the installation infrastructure, the reconstruction of rooms and halls and a full replacement of the joinery.

– The complex now has another floor, meant for the construction of comfort rooms and apartments, as well as balconies in all rooms. Furthermore, the replacement of the entire electrical installations and water system in the whole hotel and the reconstruction of the facade have also begun. Also planned is the reconstruction of the medical part and the extension of the area for the luxury wellness center with an outdoor-indoor pool and a specially adapted space for children.

The position of the hotel itself, Planinka says, as well as the rich nature, have created a terrain suitable for forming authentic health paths and parks. As this area is known for its rich cultural-historical heritage, the stay in Kursumlijska Banja will be a good opportunity for getting to know the nature, wile tasting numerous gastronomic specialties, Planinka says for eKapija.

The fame of the Prepolac restaurant, which is located within the complex in Kursumlijska Banja, dates back to the time of King Peter, who used to visit it while traveling to Kosovo. For that reason, the investors decided to reconstruct it, while preserving the authenticity of this facility.

– Throughout the history of Kursumlijska Banja, Prepolac was a popular gathering place for both local people and numerous passers-by and residents of the nearby Kursumlija. Based on local specialties and located in a forest, the Prepolac Restaurant is honoring its history – the investors say. 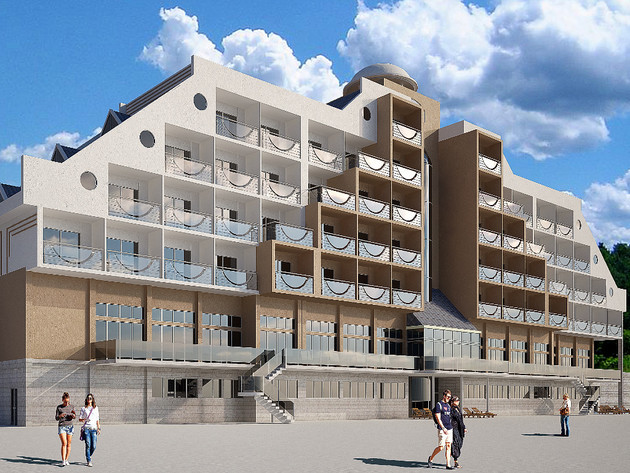 Future look of the hotel (Photo: AD Planinka)
In addition to Kursumlijska Banja, Planinka is also building a new hotel in Lukovska Banja, Bela Jela, worth EUR 8 million, whose construction is nearing completion. At the moment, external construction works are being completed and the final phase, which entails the development of the hotel's interior and the access to the hotel, is beginning.

The new hotel, as they told eKapija, will continue the tradition of using medicinal natural factors, thermal mineral waters, mud, gas and climate, for medicinal purposes. To that end, the plan is to also build a modern medical block with all the accompanying therapies and top-quality staff which will take care of the guests' health.

– The hotel will have 4 stars and everything will revolve around thermal mineral waters and clean air on the eastern slopes of Kopaonik, with a rich and authentic gastronomic offer. For all those who want to rest and relax, there's the Wellness Center with an outdoor-indoor pool, saunas, warm baths, a steam bath and other wellness features – Planinka says for our portal.

They also point out that the first guests at the new hotel are expected in early May 2021, whereby the hotel capacities in Lukovska Banja will double, as the previous capacities were insufficient for all those who are interested in visiting the place.

– The features will be upgraded for all the guests, so that the stay would be as interesting as possible. At the same time, the company will spread awareness of the medical properties of the natural factors and its effects on the prevention and people's health and it will be engaged in ensuring the maximum usage of the capacities – the company says for eKapija.