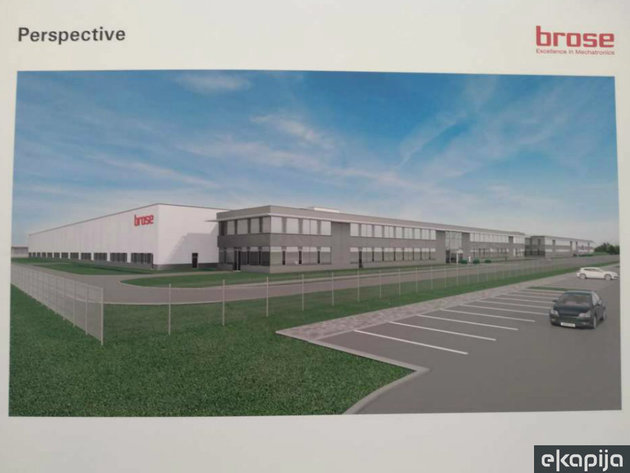 Future look of the factory (Photo: Ivana Milovanović / eKapija)
The first phase of the construction of the factory of Brose in Pancevo will be completed in the spring of 2021, and the production will start in late 2021, said Brose CEO Ulrich Schrickel. In his conversation with Serbian Prime Minister Ana Brnabic, he confirmed that the company, in addition to production facilities, would also have a development department and that it would need qualified workers who produce hardware and software.

Schrickel pointed out that, of the 1,100 workers, the plan is for 460 to have a university degree, which would make for over 40% of the total number of the employees. He also said that the plan was for the company's representatives to hold lectures at the faculties of electric and mechanical engineering, so as to establish successful cooperation.

Brnabic emphasized that the establishment of cooperation with universities in Serbia, primarily with the Faculty of Electric Engineering and the Faculty of Mechanical Engineering, such as Brose did, was of essential importance, as one of the government's goals is to connect companies with the education system and students more deeply and efficiently.

The prime minister pointed out that she had great respect for the company's management's vision to found an R&D center, in addition to establishing production activities in Serbia.