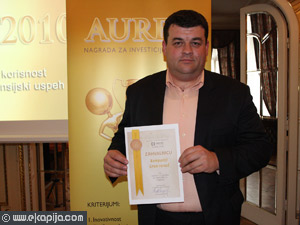 Grow Rasad opened hothouses at 13,000 square meters in Srem's municipality of Irig in February 2009 and equipped them with the state-of-the-arts plant nursery technology. The investment worth 252.2m RSD, 35m of which were provided by the Executive Council of Vojvodina, was one of this year's finalists for the 2010 Aurea award, which is granted by web portal eKapija.

Grow Rasad's hothouses are the result of the joint investment of Dutch company Grow, which has ten companies on four continents, and Novi Sad-based company Planten. In the interview for eKapija, Anđelko Mišković, the CEO of Grow Rasad, speaks about new technologies, expansion of the market outside the CEFTA countries and distribution of exclusive nursery plants to mega markets.

You have entered the second year of operations. What are the results in Serbian market?

- We find this year exceptionally interesting, primarily because the climate changes led to the ruining of large number of nursery plants. That resulted in our positive business success since it proved how profitable the investment in quality technology and infrastructure can be. Our nursery is of exceptional quality this year and demand for all types of nursery plants is quite big. Even the manufacturers are slowly realizing that they can not keep the pace with us if they use old methods of production because we offer significantly high quality at significantly low prices.

Are there more domestic or foreign partners among the customers?

- Somewhere between 70 and 80% of total production is exported, while people in Serbia mainly buy smaller quantities.

What number of nursery plants are we talking about?

- Concerning the fact that we produce broad spectrum of nursery plants, we can not generalize the things. For example, we are currently producing 4m celery plants for a manufacturer in Austria. We have recently produced 20-30,000 cucumber plants for a client in Croatia and 40,000 pepper plants for export to Bosnia and Herzegovina...

The focus of export upon the company's formation was on the CEFTA countries? What is the situation now?

- We are still focused on export to the CEFTA countries. Aforementioned celery plants for Austria will be exported through our sister company Grow Palanta, which is situated on the territory of the European Union, that is, in Hungary. The second part of the company's name means "nursery" in the language of the country in which that company operates, while the first word ("Grow") signifies it is a part of Grow Group, the mother company whose headquarters is in Netherlands. 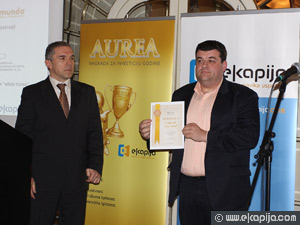 The end of 2009 and the beginning of 2010 were marked by the commencement of production of lettuce with root. What are the first indicators of that project?

- That is a special programme and we expect much from it. We started production of that vegetable because the market in Serbia has no demand for nursery plants during the whole year and there are certain empty periods when there is no need for nurseries. The second reason is the fact that that production can employ the technical capacities of our facility. Complete production is organized on concrete, so that a clean product is obtained. We try to use all that for hydroponic process of production of lettuce with root. That is an exclusive product because such production exists only in Belgium and Netherlands, and it can be rarely found anywhere in the world.

What is the response of potential partners?

- We have already had contacts with Slovenian market chains. We plan to start cooperation with German Kaufland, which has 46 mega markets in Bulgaria and 25 in Croatia.

What about Serbian market?

- We are currently working with Delta Maxi. Maxi is exclusive distributor of our lettuce for the territory of Belgrade. We are also present in Metro Cash & Carry facilities.

In addition to expansion of export, what are Grow Rasad's plans for the following period?

- We plan to move the whole production to an open field in 2010. That means that we will try to control the outdoor production by means of a special technology and the use of software add-ons, but lettuce will not be produced in the soil, but in special plastic carriers. In that way the production will be possible during the whole year.

Will everything stay in Irig?

- We are staying in Irig and planning new investments because we already have complete infrastructure and two highways in the vicinity, as well as Novi Sad and Belgrade. We also have a good cooperation with local self-government. Certain number of workers, mainly agronomists, are coming to work from Novi Sad, while all other employees are from the region of Irig and there is no reason for us to leave it. How much money will be invested depends on the returns of previous investments.

Will production growth lead to creation of new jobs?

- We plan to hire new people because the outdoor production will require employment of new workers, primarily in the packing unit. Lettuce will be packed in special bags and it will be the product that will, hopefully, attract the attention of mega market since it stays fresh on shelves for up to ten days.

How did local and government administration reacted to the commencement of your, primarily innovative, method of production?

- I only have the words of praise for all of them. At first we needed more energy to show that we really want that. However, when they realized that we have brand new ideas and technologies, they all started helping us.