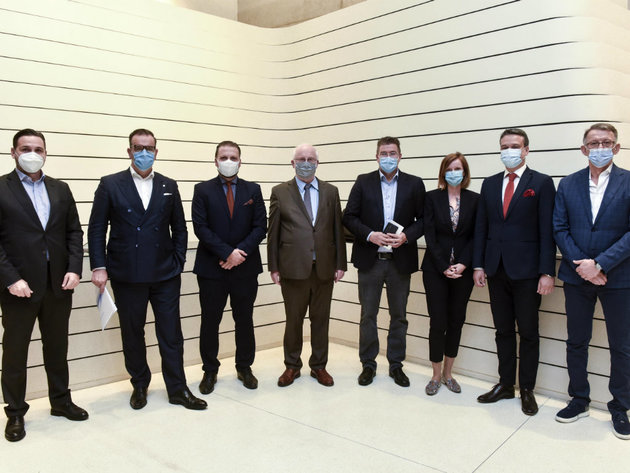 Udo Eichlinger, fourth from the right (Photo: AHK Srbija)
The German-Serbian Chamber of Commerce will be led by a new Managing Board in the next two years. The new president of the Managing Board, with a two-year mandate, will be Udo Eichlinger, the CEO of Siemens Serbia.

– As the largest bilateral economic association in Serbia, the German-Serbian Chamber of Commerce will continue advocating the improvement of the business environment in Serbia in the upcoming period as well, support the economic reforms and support the efforts of the Government of Serbia in carrying out the reforms. On the other hand, the chamber will focus on efficiently representing the interests of the member-companies at governmental and non-governmental institutions and in the public sphere. We will be a stable partner to the economy of Serbia as we have been so far, to the end of making a quality contribution to the improvement of the business climate in the country – emphasized the newly appointed president of AHK Serbia, Udo Eichlinger, who thanked the members of the chamber for their trust, the press release says.

The director of the German-Serbian Chamber of Commerce, Martin Knapp talked about the results and the activities of the chamber in the preceding period and pointed out that the founding of a joint chamber in 2016 had sent a clear signal to the German business community that Serbia is a reliable partner.

– Through the chamber of commerce, we contribute daily to improving the contacts with the German economy and we are in a way advertising the Serbian economy to German investors – Knapp said.