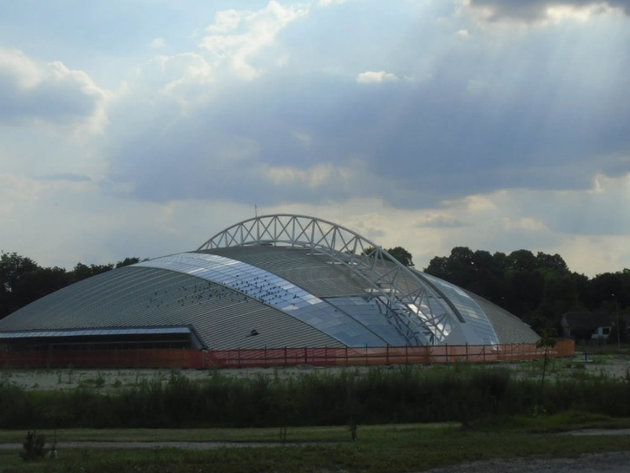 Sports Hall Indjija (Photo: YouTube/screenshot)
The construction of the Sports Academy, an indoor pool and a new city market in Indjija are some of the large planned infrastructure projects that will have to wait for some more favorable times.

As Nemanja Milojevic, the head of the Cabinet of the President of the Municipality of Indjija, told eKapija, the preparation of project-technical documentation should start next year.

– This year being the way it is, due to the coronavirus pandemic situation, the preparation of the project documentation for the indoor pool will be included in the municipal budget and the public procurement plan next year, which is when the tendering can be expected – Milojevic says.

He adds that the municipality wants the Olympic indoor pool, which is to be located next to the existing outdoor pool, to be built in the next four years.

When it comes to the other big project, the construction of the Sports Academy, Milojevic has confirmed his earlier statement for our portal about the project documentation being ready.

– The documentation has been prepared and the construction of the Sports Academy is planned in this year's municipal budget, and if we don't manage to start building it by the end of the year, we will do so in early 2021. It is more realistic to expect the tendering for the construction to open in early 2021 – our interviewee says.

The project of the construction of the Sports Academy in Indjija was announced two years ago. As eKapija has already written, the plan is for the academy to be modeled after the world practice of education in boarding schools, where, initially, thirty children aged 7 to 14 would get primary and sports education. The Sports Academy should be built near the new sports hall and it will be a complex with sleeping rooms, a presentation hall, a cafeteria, a kitchen... The Municipality of Indjija is the main developer and financier of the project, which is worth RSD 55 million.

Milojevic repeats that the city authorities still plan the previously announced projects of the construction of a new city market, the reconstruction of a city square and the development of parks, but doesn't specify the deadlines.

– What is certain is that the setting up of an artificial court in the Sports and Recreation Center Leje, from the donation of the Football Association of Serbia, should start these days – Milojevic told us.